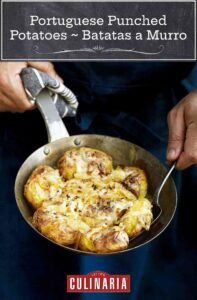 This traditional Portuguese smashed potato dish, batatas a murro, is simply roasted potatoes that are crisp-skinned and soul-achingly tender smothered with caramelized onions and melted cheese. Although actually, there’s nothing simple about it. At least not the taste. Typically served as a side, but we won’t judge if you indulge in an entire plateful, preferably accompanied by a glass of wine.–Nuno Mendes 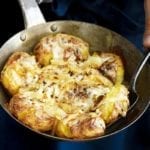 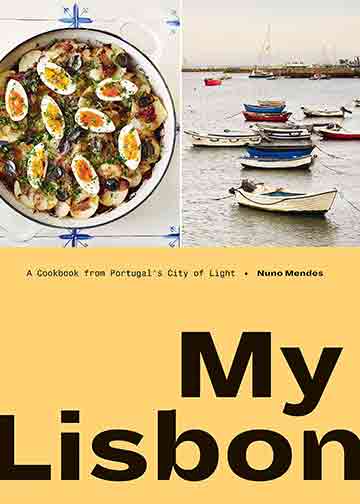 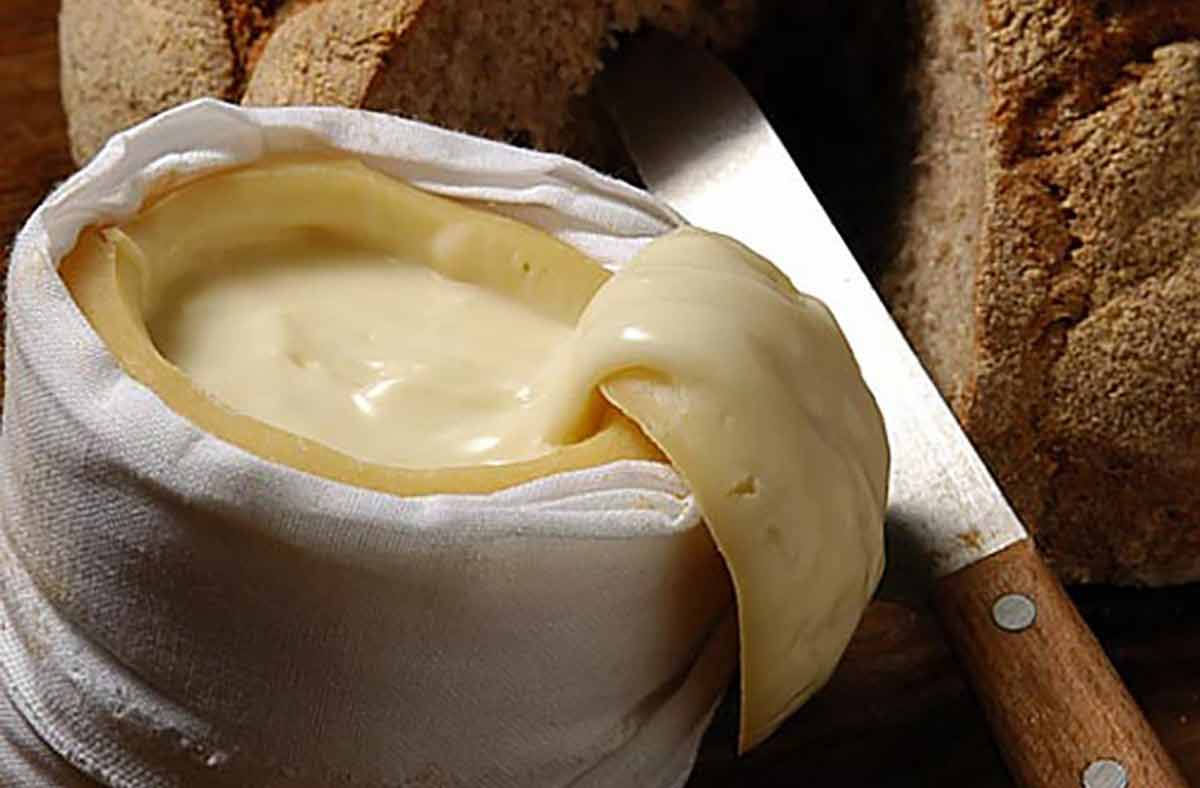 What is queijo da Serra cheese?

“This is the reigning monarch of Portuguese cheese and has been for more than eight hundred years. Produced from the raw milk of Bordaleira sheep that graze on Beira Alta’s soaring Serra da Estrela mountain range, hence the name, queijo da Serra is still a handmade, artisanal cheese. Because of the work involved, each maker can turn out at most three wheels a day, but the EU is pressuring makers to automate the process. The cheese is produced in colder months, primarily from November to March, and it undergoes a four- to six-week maturation process. Initially, the cheese is sumptuously, creamily soft, and the linen-wrapped wheels are traditionally served with their tops shorn off and spoons are passed around for scooping. As it ages, the cheese firms up but never hardens.”

How to pick the perfect queijo da Serra?

To pick a perfect wedge or wheel, definitely poke. The rind should yield under even the slightest pressure. And always serve the cheese at room temperature, taking it out of the fridge up to three hours in advance if necessary. If you’re bereft of queijo da Serra in your area, you can order it online or you can substitute Spain’s queso de la Serena or an Italian Taleggio, an oozy, deliciously stinky cow’s milk cheese.

Crisp potatoes, sweet onions, and melted cheese…what’s not to love? This dish hit all the right notes and could easily become part of my go-to comfort food repertoire. And the good part is that it doesn’t feel too anything…neither too starchy, too oniony, or too oozing with cheese, but with just the right amounts combined to create a satisfying, soothing, warming side.

And the splash of vinegar in the onions was just right to cut through the rich cheese. I might not want to eat this on a hot summer night, but give me a cold, snowy winter day and this could easily be what I would want on my plate.

I used grated Gruyère, which worked extremely well with the other ingredients. I wouldn’t have wanted any more cheese than what was called for in the recipe.

The onions required about 20 minutes to become soft and translucent and another 20 to caramelize. I did not use a cartouche for this step, preferring to stir and watch them instead, and I did try the squeeze and taste test to confirm texture and flavor.

Makes 4 servings using enormous self-control not to eat it all myself.

It’s not just the Portuguese who favor the potato, onion, nd cheese combo, though I’m intrigued they’re interested in the stinky cheese spectrum. I wasn’t able to locate the queijo da Serra, or any Portuguese cheeses, unfortunately, and I wanted to go with the stinky idea, so I passed on the idea of Gruyere and went with the idea of a washed rind. I found a lovely seasonal from Belgium, Spring Chimay. It was nice and pungent and there was an aroma surrounding me on the train home and in the fridge where I kept the cheese overnight.

To cut to the chase, and then I’ll backtrack with some details, I could be the voice of this recipe: “I sometimes eat a whole bowl of this…,” and my fellow taster felt the same. However, the cheese virtually disappeared. When I placed it on the potatoes, it looked like a lot. When I took the potatoes out of the oven, with the cheese melted, it did not look like enough. We agreed that it could definitely use MORE cheese! And that double the cheese might not be too much! These could be eaten by the bowlful or divided but certainly not more than four servings.

With a salad, it could be a vegetarian lunch entrée. Even served alone, a green garnish would be visually appealing. We took out a variety of microgreens, which added a little sweetness, a little spiciness, and a little crunch.

A definite yes to the cracked black pepper atop, while still hot: cracked, and not too fine.

The melty cheese will never be better than right as it is pulled from the oven. Serve right away. We barely got the potatoes moved to plates before we were splitting the (four?!) servings two ways!

This was such an elegant and simple dish. I wouldn’t necessarily call it completely no-fuss because there are a few steps that take a little time, but there isn’t anything remotely difficult about it. It’s comfort food at its best, and also makes for a great way to use up some aging potatoes and onions in the pantry. Leftovers are lovely heated up in the morning with some runny egg!

We loved these cheesy potatoes draped with sweet strands of onion and discovered a new cheese in the process.

I was pleased to be able to find the queijo da Serra at the cheesemonger’s in our local market. While it has a distinctive, strong taste, it is not overpowering. My husband typically doesn’t care for overly strong cheeses but had no objection to this cheese at all. It takes some time to prepare the dish, but the recipe itself is not difficult and the payoff is well worth it. It would have been great to have leftovers from this, but the recipe does not produce a particularly bountiful yield and two of us finished almost all of the potatoes as part of a meal with sausages and kale.

This is comfort food at it’s finest, a definite addition to our side dish rotation. It’s the simple ingredients, layered for flavor that makes it so special! It is also versatile in that it can go with almost anything, even just a side salad, and it’s component parts can all be prepped ahead.

We enjoyed this with salmon and a Sauvignon Blanc.

With a few minor tweaks, the recipe produced a great-tasting potato and onion combination. I especially enjoyed the texture differences between the crisp potatoes and the soft onions and gooey cheese.

I was inspired to try these punched potatoes by David’s recent visit to Portuga. The food just looked fantastic!

I was surprised at how simple this recipe looked yet how delicious it was. I couldn’t find queijo da Serra so I had to use Gruyere. I was reluctant to use any other type of cheese since I wasn’t sure what this was supposed to taste like in its original form. Next time I will try Mont d’Or.

I didn’t use the cartouche, I didn’t feel like I needed to speed up the process since I was cooling the potatoes at the same time anyway. I kept the flame low and slow for sweet, tender onions.

I didn’t think the cheese was going to be enough but once I shredded it, it was plenty. I found that the only problem with the Gruyere was that it made the dish a tad bit salty. I would dial back the amount of salt I use on the potatoes next time.