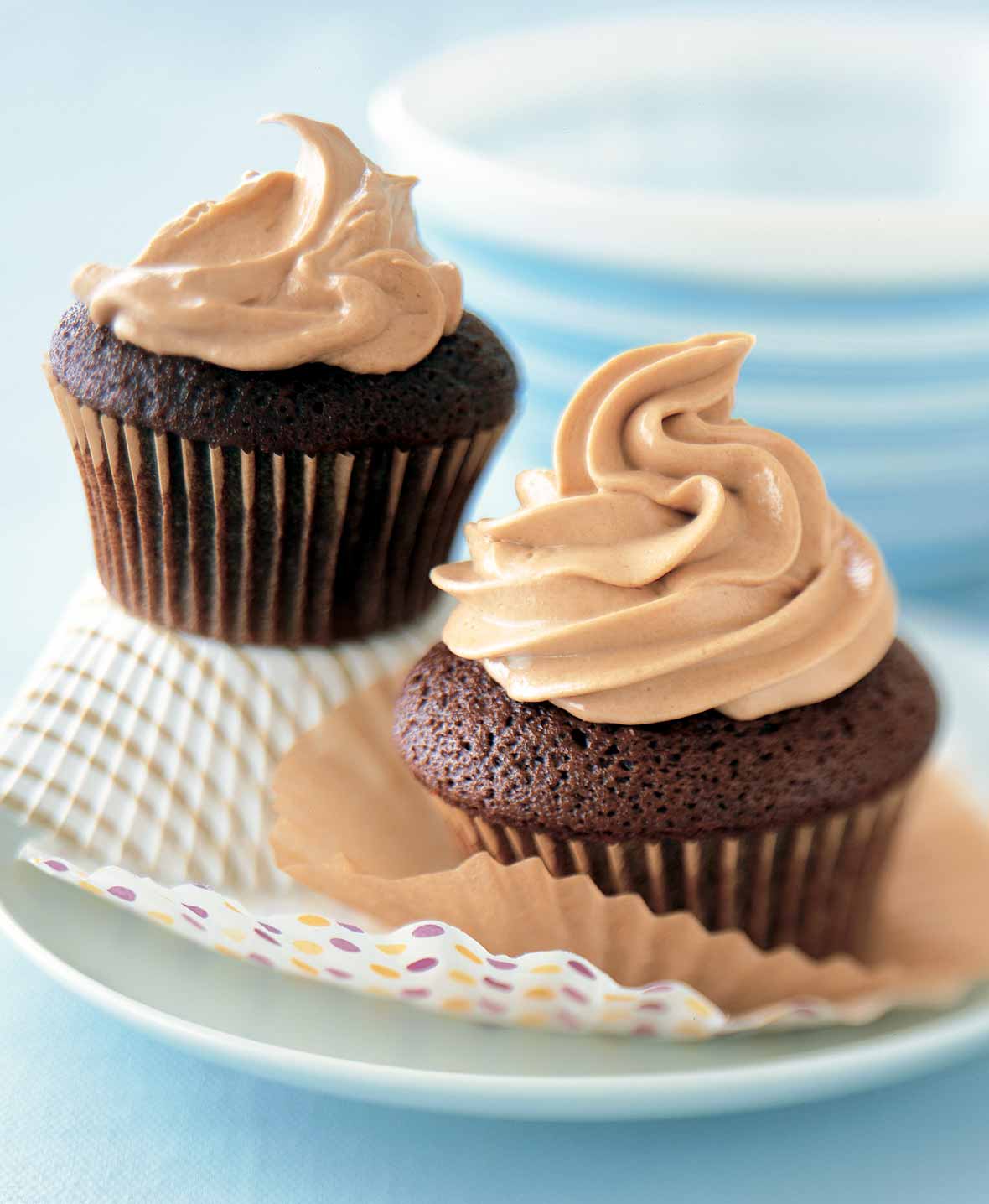 I adapted this chocolate-mayonnaise cupcakes recipe from one by Hellmann’s, increasing the cocoa powder and sugar and reducing the eggs by one. It’s easy to assemble and practically foolproof. The batter is rich and deeply chocolaty and results in bouncy little cupcakes that don’t dissolve into a shower of crumbs with the first bite. You must, must, must try these with the Caramel-Butterscotch Buttercream Frosting; its robust singed-brown-sugar flavor perfectly complements the almost black plainness of the cupcakes. In fact, it’s so good, it might become your go-to frosting.–Jill O’Connor 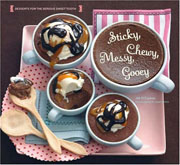 Make the cupcakes
Position a rack in the middle of the oven and preheat to 350°F (175°C). Line two standard 12-cup muffin tins with paper cupcake liners.
In a large bowl, sift together the flour, cocoa powder, baking soda, and salt. Set aside.
In another bowl, combine the sugar and eggs and beat with an electric mixer set at medium-high speed until light and fluffy, about 2 minutes. Beat in the mayonnaise and vanilla just until combined. Reduce the speed to medium and beat in half of the flour mixture just until combined.
Stop the mixer and scrape down the sides of the bowl. Add half of the boiling water and beat at very low speed, just until the batter is smooth, 5 to 10 seconds. Add the remaining flour mixture and beat just until combined, 5 to 10 seconds longer. Beat in the remaining water. The batter will be somewhat thin.
Divide the batter among the prepared cupcake cup liners, filling them about two-thirds full. Bake until a wooden skewer inserted into the center of a cupcake comes out clean, 18 to 22 minutes. Transfer the tin to wire racks and let cool completely.
Make the caramel sauce
Combine the granulated sugar and water in a medium, heavy-bottomed saucepan over medium heat. Cook, gently swirling the pan occasionally, until the sugar dissolves and starts to change color. Increase the heat to high and boil until the syrup turns a deep amber color, 4 to 5 minutes. Watch carefully, as it can burn quickly.
Immediately remove the pan from the heat and stir in the cream with a wooden spoon. Return the pan to the stove, reduce the heat to medium-low, and cook, stirring constantly, until the caramel thickens, 3 to 5 minutes. Remove the sauce from the heat and let cool.
Make the buttercream frosting
While the sauce is cooling, prepare the buttercream. Combine the eggs and brown sugar in the metal bowl of a standing mixer. (Alternatively, use a metal mixing bowl and a handheld electric mixer, but be prepared for a workout.)
Fill a large saute pan or frying pan with water and bring to a simmer over medium-high heat.
Place the mixing bowl in the simmering water and whisk the eggs and sugar constantly until the sugar is completely dissolved and the mixture is thick and fluffy and very hot, 3 to 4 minutes. Use an instant-read thermometer to check the temperature; it should be anywhere between 120°F and 140°F (49°C to 60°C).
Remove the bowl from the simmering water and, using the whisk attachment, beat the eggs at medium-high speed until they are tripled in volume and form soft peaks and the bottom of the bowl is completely cool to the touch, about 10 minutes. Beat in the vanilla and salt.
While the eggs are mixing, unwrap the individual sticks of butter and rewrap them loosely in plastic wrap. Pound the butter 5 or 6 times with a rolling pin, or until the butter is soft and malleable but still cool.
With the mixer speed still on medium-high, add the butter, approximately 2 tablespoons at a time, to the egg mixture, beating in each addition until it is incorporated. When all the butter has been incorporated, slowly dribble in the bourbon. Don’t start to panic if the buttercream seems too liquid or looks curdled as you beat in the butter. It will magically emulsify into a smooth, creamy frosting by the time the last little bit of butter is mixed in. Have faith; it’s worth it.
When the buttercream is smooth and glossy, turn off the mixer and, using a rubber spatula, fold in 1/2 cup of the cool caramel sauce. For a stronger flavor, fold in up to 1/2 cup more caramel sauce.
When the cupcakes are completely cool, frost them with the Caramel-Butterscotch Buttercream Frosting and serve.
Print Recipe