These pulled pork tacos with apple-serrano slaw are made with shredded pork cooked with a blend of Indian spices. Taco Tuesday just got a whole heck of a lot more interesting.

A few years ago, when Michael and I drove cross-country on our big move from Washington, D.C., to San Francisco, we ate some of the best tacos we’ve ever had. Made by street vendors in Southern California, these tacos were packed with flavor. They are the inspiration behind these pulled pork tacos, a perfect combination of hot and sour blended with the earthy sweetness of jaggery.–Nik Sharma 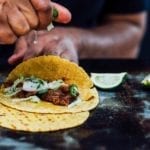 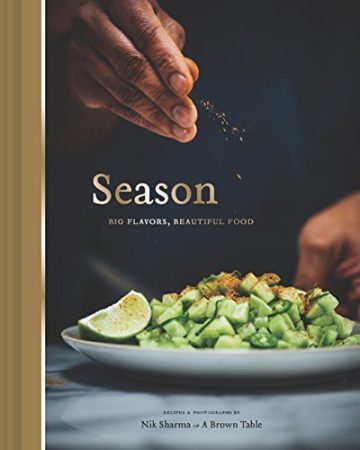 For the pulled pork

For the apple and serrano slaw

For assembling the tacos

Make the apple and serrano slaw

This was a great prep-ahead recipe for a gathering. It’s honestly very simple, despite the apparent laundry list of ingredients and lengthy process. A lot of the time is hands-off, just waiting for the meat to cook and cool. The crispy, fresh and spicy slaw was the perfect addition to balance out the richness of the pork, and my guests gave rave reviews about the food.

I will say while the pork was in the oven, the smell coming out was really…odd. I think it was the wine I used in combination with the spices…but ultimately the pork turned out absolutely delicious, juicy, sticky, and very satisfying. (I used a Dry Savignon Blanc.)

In place of amchur I used a couple of pieces of local mango I had dried earlier this year during mango season.

It took 3 hours to cook the pork, and I flipped the meat over in the last hour so that it would be evenly juicy throughout. I kept the fat and let it melt into the meat!

I pulled the pork using 2 forks after about an hour of cooling time and then let it cool in a glass container before placing it in the fridge for later.

The pork was for a gathering where I didn’t have a kitchen (at a Brewery/Tap Room) to heat the meat up again before service. So, I left the sealed container of pork out in the summer sun on a picnic table for 30 minutes and the solidified fat melted and I mixed it into the meat, rather than scraping it out…I’m glad I kept it!

These tacos were definitely a hit. I think I would like to play with the marinade for the pork in future and see what other flavors I can try, but this was truly delicious! I’m also thinking of adding some jicama to the slaw next time for additional crunch!

Amazing flavor created in this great fusion recipe using Indian spices and South American techniques to create a tasty taco. I was not as impressed with the slaw but perhaps with some tweaks it too could be a great addition to this taco. Homemade corn tortillas are definitely the way to go with this as well.

My pork butt was closer to 4 lbs which resulted in a longer cooking time (4 hours versus 3). only white wine I had on hand was a white zinfandel which worked well in this recipe. For the jaggery, which I couldn’t find in my local stores, I substituted turbinado sugar and was fortunate to have exactly 2 tbsp of amchur left in my spice tin along with just the right amount of the Kashmiri chile powder. Time to order more spices!

I would advise against using a stick blender in blending the braising ingredients as the hard spices kick back (ask me how I know!) and instead use a regular blender as directed. It took about 20 minutes to prep the pork and braising liquid. Next time I will use a larger Dutch oven. Additionally, even though I wrapped my lid in three sheets of heavy duty foil, my lid did not form a seal. I think that it actually would have sealed better without the foil and will probably try that next time. Because it did not form a good seal most of the liquid boiled away by the 3-hour mark and I had to add an additional cup of water so it wouldn’t burn during the final hour needed in the oven.

If you are worried about the fat content, leave the roast intact and refrigerate it overnight as the recipe directs. Then skim the fat, rewarm the meat and then shred it. If you don’t want to wait for the overnight part (which seems unnecessary), then remove the meat from the pot and shred it, then crisp it up in a pan before serving immediately. When testing I shredded the pork while warm then refrigerated it overnight as directed and instead of being able to remove the congealed fat from the pork it was incorporated into the shredded meat and left the meat very greasy when rewarmed. So shred first and serve immediately or shred after the overnight rest. Either way, crisping the shredded pork definitely is a tasty way to serve it.

My only disappointment in the entire recipe was the apple slaw. First, a word of caution. Watch that Serrano! I gathered a reddening Serrano from my garden for this recipe as we grow our own, but it was one of the hottest I’ve ever tasted! Even with removing the seeds, it packed quite the punch. So make sure if you’re sensitive to heat you check before using. So my disappointment in the slaw may be partially my own fault in what size I shredded my apple (largest holes on my grater) but I think it has more to do with the apple itself. If I were to make this slaw again I would substitute cabbage instead as it holds its crispness better than apple does. The vinegar and lemon juice bite from the slaw does do a good job of cutting through the fattiness of the pork (read above for ways to reduce that) but the apple just didn’t stay crispy which I think would be solved with the use of cabbage instead. I used two 8 oz apples for this recipe.

Finally I made some homemade corn tortillas and served it up. The flavors are amazing. Will definitely be retrying it.

I’ve been on the hunt for other great fusion tacos since my first one at the Kogi truck and let me tell you, these are DELICIOUS. Don’t be turned off by the lengthy ingredient list: just blend, dump, and go. Honestly, the hardest parts of the entire recipe are getting the seeds out of the cardamom pods and waiting for the pork to rest overnight. The wait is worth it: you’ll be rewarded with incredibly juicy and succulent pork, topped with a bracingly fresh and vibrant slaw.

In fact, squeezing the grated apple for the slaw is genius…it removes the excess moisture and tempers some of its puckering tartness, leaving you with a slightly tart crunchy canvas for the rest of the flavors. I will 100% make again.

If I were to be a stickler, the pork could use some salt at the start to help highlight the depth of flavor of the sauce. One teaspoon of kosher salt should do the trick. You can correct with finishing salt, but it won’t provide uniform flavor the same way.

I left the fat on the pork. My butcher only had one pork butt left, and it was 4.2 pounds with the bone in. It worked perfectly. I used the full 3 hours and that was perfect. I cooled for 1 1/2 hours out of the oven with the lid on and then another 1 1/2 hours with the lid off.

I skimmed fat and shredded before putting it in the fridge, tossing the shredded meat in the sauce.

It took 15 minutes to reheat over low heat. Was still incredibly moist and succulent.

We ended up using probably 2 tablespoons of filling to 1 tablespoon of slaw per 6-inch taco.

This is so different and delicious. It has a little heat, but I’d call it “backburner heat.” Paired with the picante “front burner” heat of the slaw, it’s an amazing combination of flavor punches. Really unusual and I definitely plan on making this the next time we have any sort of taco night. My guests are sure to be impressed!

While I didn’t pair it with anything else, I’d maybe incorporate some grilled avocados and a lime crema for some cooling for the youngsters.

I used a blended, fruity wine (Berkman’s Blend from a local vineyard) made from Chardonel and Albarino.