This slow cooker pulled pork is easy to make with pork shoulder, aka pork butt, onion, beer, sugar, and spices, and it capably feeds a crowd. (Just be certain to stash some in the back of the fridge so you have leftovers.)

This slow cooker pulled pork recipe has a very different end product from a grilled or smoked pork butt recipe. Both will result in pulled pork, but this version is cooked in a liquid. It’s basically braised for hours and hours. It gets a lot of its flavor from the liquid, while the grilled version gets its flavor from a rub and the natural fats in the pork.

Have no fear, though; you can still use this pulled pork as you would any other. Just be sure to follow the step about removing all the liquid from the slow cooker and adding only a part of it back in, so your pork isn’t too soupy. Serve with toasted buns, barbecue sauce, and coleslaw for a classic meal.–Nick Evans

As with all slow cooker recipes, our testers love the “set it and forget it” method used here. They also are thrilled that such an inexpensive, easy-to-prepare meal can feed a crowd or provide enough meat for several meals.

How do I choose a pork butt at the store?

According to author Nick Evans, “use visual cues to help you buy pork shoulder. Look for meat that’s pinkish-red in color with some marbling in the meat.”

How can I tell if my pork is done?

The pork should be fork-tender and easy to shred. If you have a meat thermometer, the finished temperature should be between 200°F and 205°F (93°C and 96°C).

What should I serve with this shredded pork?

Classic sides like creamy coleslaw, mac and cheese with beer, or potato salad with dill are all welcome here.

How should I serve this?

The meat is usually tucked into toasted buns to make pulled pork sandwiches, but feel free to get a little creative. We love making pulled pork tacos, adding it to grilled cheese sandwiches, and piling atop baked potatoes. 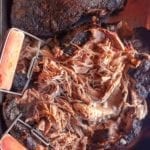 This slow cooker pulled pork is easy to make with pork shoulder, aka pork butt, onion, beer, sugar, and spices, and it capably feeds a crowd. (Just be certain to stash some in the back of the fridge so you have leftovers.)
Prep 15 mins
Cook 10 hrs
Total 10 hrs 15 mins
Mains
American
24 servings
233 kcal
4.84 / 6 votes
Print Recipe 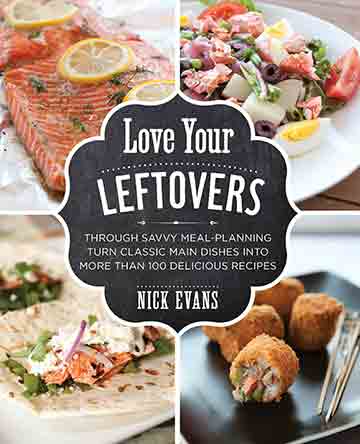 For someone making their first foray into the world of pulled pork in the slow cooker, this recipe is great because it’s a simple, no-fuss preparation that you can customize to your own tastes.

I used an organic pork shoulder, Sleeman’s ale, and an 8-quart oval slow cooker. I removed all the external fat and any larger fat pockets when I cut the meat into chunks. I cooked everything for 10 hours, and the meat was very tender, shredding easily when cool enough to handle. I removed any other fatty bits that I saw when I shredded the meat.

At this point, I must say that the taste was okay but a little lacking. I added 2 cups cooking liquid back in, and this made the meat juicy but not overly so. I had pretty close to 12 cups shredded meat when all was said and done. We served this with creamy coleslaw, barbecue sauce, and ice-cold beer.

After dinner that first night, we still had about 5 cups pork left so when we warmed it up the next time, we added another tablespoon chili powder and 1/2 cup barbecue sauce directly to the meat. This vastly improved it. That time, we served it with shredded lettuce and cheese. I loved this recipe for the ease of preparation, but next time, I will probably double the seasoning before cooking, as it was too subdued after the long cooking time. Also I’d add only 1 cup of the cooking juices back in and 1 cup barbecue sauce before serving.

This is a handy slow cooker meal to have at my fingertips. Everything is simple to put together and takes about 5 minutes total. I mixed all the spices and sugar together and grated the onion the night before I cooked the pork. It was easy to mix the ingredients together in the morning and place the roast in the Crock Pot, set it on low, and head off to work.

When I returned home, I baked some potatoes, shredded the Crock Pot pulled pork, placed some pork in the baked potatoes, and had dinner. The meat shreds easily with two forks and tastes delicious. When I entered the house after work, the aroma of the meat had filled the house. I have a 6 1/2-quart oval slow cooker and cooked my pork on low for 10 1/2 hours. I halved the recipe and had enough meat for 2 dinners for 3 people each.

There is a lot of flavor packed into this slow cooker pulled pork recipe, and with such easy preparation, it could easily become a regular in my kitchen. I halved the amount of pork in the recipe because my slow cooker has only a 3-quart capacity, and also I didn’t need to feed 30 people, just two. Half the sauce recipe didn’t seem like it would be enough, so I used the whole amount of the sauce ingredients, and it turned out great.

The key to this was to put everything in the fridge overnight after cooking to let the flavors meld, and so that I could skim some of the excess fat off of the top. I found this to be crucial. Everything was super flavorful, and the sauce seemed to soak into the meat pretty well. I didn’t find it to be overly “soupy,” just sloppy and delicious.

It definitely took the whole 10 hours to cook, so this is certainly something to start early in the morning or right before bed. As far as flavors go, I wouldn’t call it traditional barbecue sauce, but it is jam-packed with flavor and depth and isn’t overly sweet as is so often the case. I froze half the leftovers and have had food all week. The recipe yielded about two quarts of sauce and meat. Cheap and easy!

I halved the recipe, using a 4-pound piece of pork butt. I cut it into 3 pieces. I cooked it in a 5 1/2-quart slow cooker for 10 hours. I ended up with 7 cups pulled pork and 2 1/2 cups liquid. I used about 2 cups of the liquid to pour over the pork. The pork was very tender but not particularly flavorful.

I served the pork with coleslaw. I am going to freeze portions of this for quick and easy lunches. I plan on serving the leftovers with barbecue sauce. I realize that the recipe suggests this, but I wanted to give the pork a chance on its own first.

And why did I decide to test this recipe just for the 4 of us? The good thing is that I can freeze it for a weeknight when we are in a rush but need an easy, homemade meal. This recipe couldn’t be any easier to make. 5 ingredients and that’s it! WOW… It took exactly 7 hours on high in a 5-quart oval slow cooker.

I removed as much of the fat as I could, so I am sure by the time all the fat was trimmed, I ended up with about 7 pounds of actual meat. The meat was extremely tender. I removed all the meat from the juices and shredded it all. Then I started adding the juices cup by cup and ended up using it all (which was 5 cups in total) and wished I had 1 more cup to make it nice and juicy. The taste is very good and simple—there are not too many ingredients to mask the pork taste.

This easy slow cooker pulled pork recipe really is a no-brainer, and when serving it in a bun, you can dress it up with barbecue sauce, mustard, or anything else you may enjoy. We actually decided to add it to pasta along with broccoli, and it worked very nicely.