This oatmeal cake is a dense cake that’s layered with a boiled coconut-pecan frosting. It’s magnificent any time of the day, but since there’s oatmeal in it, it’s perfectly acceptable to enjoy for breakfast.

This kind of hearty oatmeal cake has been around for decades, long before any discussion of the nutritional benefits of oats. Its nubbly texture is a pleasure, and since oatmeal shows up mostly at breakfast, you’re allowed to take along a piece of oatmeal cake on a busy morning when you need something good to go. The popular modern version of this classic cake is baked in a 13-by-9-inch pan and frosted with a pecan-coconut frosting, using coconut toasted in the oven to make it fragrant and crunchy. I still love it as an everyday layer cake, frosted on top and between layers with a simple buttery white icing studded with coconut and pecans, its sides left plain to show off its handsome hue.–Nancie McDermott 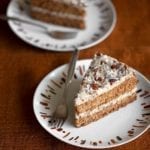 This oatmeal cake is a dense cake that’s layered with a boiled coconut-pecan frosting. It’s magnificent any time of the day, but since there’s oatmeal in it, it’s perfectly acceptable to enjoy for breakfast.
Prep 50 mins
Cook 1 hr
Total 1 hr 50 mins
Dessert
American
8 to 10 slices
789 kcal
5 / 3 votes
Print Recipe 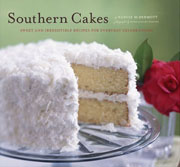 For the oatmeal cake

For the boiled frosting

Oh my, this cake made my mouth sing! I don’t think I’ve ever had oatmeal cake before, so I have nothing to compare this to, but this cake was so moist and so delicately flavored. I was nervous about the nutmeg overpowering the rest of the cake, but it gave off a slight spice that is very nice. This frosting is very similar to the frosting on a traditional German chocolate cake, and it pairs very well with the oatmeal.

My only complaint is that I wish there was more of it! Next time—and there will be a next time—I will double the frosting. My tester took one bite of this cake and said, “Oh no, this is the kind of cake I could eat in one sitting.” I didn’t let him!

The title of this recipe makes it sound like it’s healthful, but with the frosting, it becomes decadent. This recipe is easy to make. I made it in a 13-by-9-inch pan and that made it even easier. The only thing I would be tempted to add would be some cinnamon, otherwise it’s delicious. The frosting is great, too. It’s a classic boiled frosting. I toasted the pecans.