Who doesn’t have a favorite apple recipe? For some of you sorbet lovers, this recipe just may fit the bill. Says authors Frank Browning and Sharon Silva, “This big batch of refreshing pink apple sorbet—its lovely color the result of cooking the apples unpeeled—was gobbled right up by a legion of none-too-shy friends at one of our periodic apple recipe tastings.” You can easily cut the apple sorbet recipe in half, which, happily, leaves the hardworking cook the rest of the wine to sip. Although we’re not so certain we’d want to sacrifice it for sipping at the expense of more of this blushing red sorbet. Oh, and don’t be cheap when it comes to buying the Gewurtzraminer. Otherwise your fancy sorbet will taste like sherbet dished up at a freeway truck stop.–Frank Browning

In their book, the authors offer up some rather intriguing fair maiden trivia. Apparently at nineteenth-century “paring bees,” it was common practice for young women to toss a long strand of peeled apple skin over their shoulder, hoping that its cursive curls would form the first letter of the name of their future betrothed. While those of us who are single here at Leite’s haven’t gone to such lengths (at least not yet), we have peeled our share of apples for recipes. Perhaps from now on we’ll pay closer attention to the message in the peels, not the cards. 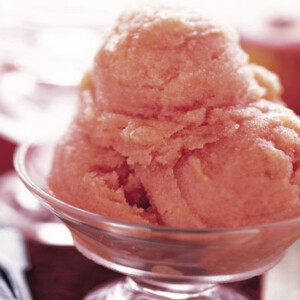 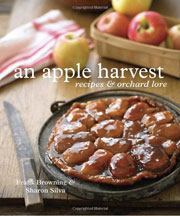 OMG this is so much better than I’d expected! The sorbet is smooth and a very pretty peachy color and really very easy to make. The ginger flavour is just in the background, making the apples even more “appley”. Since the suggested apples aren’t available right now in our area, I used another type of apple, Elstar, the only sweet-tart one at our local farmstand. This apple is quite sweet and the sorbet was actually a touch too sweet for me. I would maybe mix apple varieties next time I make this, using maybe a very tart apple like Granny Smith with something like the Elstar. In any case, I really loved this sorbet.