Skip to content
Home » Recipes » Gnocchetti with Pancetta, Chanterelles, and Mint
Shares265PinShareTweetYummlyShare on FlipboardEmailHeart this post
Jump to Recipe

Is there anything better than a big bowl of pasta sitting in front of you at dinner? Absolutely. A pasta recipe that doesn’t take all day to make, you playing the role of the gentle old Italian grandmother in a faded apron stirring and stirring the sauce. Don’t get me wrong—sometimes I want my pasta fix, and there’s no end to my devotion (read: being chained to the stove). But when I want a quick and easy pasta recipe, there’s always Ethan’s Stowell’s Gnocchetti with Pancetta, Chanterelles, and Mint.

This pasta recipe is a perfect summer-ebbing-into-autumn dish, when chanterelles are at their finest. You’ll notice the recipe also calls for pancetta, which is unsmoked Italian bacon and lends a porky goodness to the gnocchetti.–Ethan Stowell

LC Getting to Know Gnocchetti Note

Not to be confused with gnocchi, gnocchetti (nyo-KAY-tee) is a small pasta shape that, not surprisingly, resembles its namesake potato dumpling. If you don’t happen to have gnocchetti on hand, use any similarly shaped pasta, such as orecchiette, cavatelli, or gemelli. Or heck, just swap in whatever pasta you happen to have on hand, whether penne, farfalle, even broken spaghetti.

Gnocchetti with Pancetta, Chanterelles, and Mint 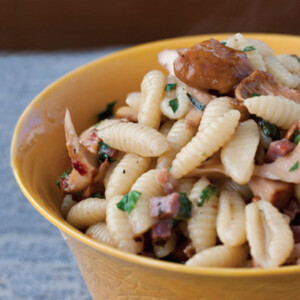 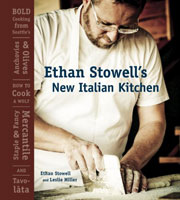 After so many tomato-based and sometimes heavily sauced versions of gnocchi, this simple preparation is a refreshing alternative. I hadn’t heard of the tiny gnocchetti before this recipe and was very pleased with the way it holds the liquids from the pan once served. With the aromas stemming from this preparation, the most difficult part of this recipe was waiting for the food to cook. It was tantalizing to say the least. The mint provides more of a sensation than a flavor, although all of the ingredients came together to provide a wonderful taste experience. I used a fruity olive oil for drizzling and kept the Reggiano at the table.

As the note says, this is a “quick and easy” pasta recipe that is nevertheless full of flavor given the pancetta, mushrooms, chile flakes, and mint. It’s great for a weekend meal since there’s relatively little prep work, and it comes together quickly.