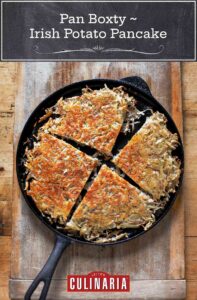 The best way we can think to describe pan boxty is to that they’re hash browns’ answer to fudgy brownies. See, pan boxty is essentially a huge hash brown with a characteristically crisp, crackling surface but a dense and almost-but-not-quite gooey interior. It’s an Irish classic. And, as with so many classics, there’s all manner of shapes, sizes, and incarnations of the recipe. But the love for pan boxty is singular, as witnessed by the following little Irish ditty. (Feminists, please note, LC cannot take credit for this rhyme nor will LC be held responsible for it.)

Boxty on the griddle
Boxty on the pan
If you can’t make boxty
You’ll never get your man.–Renee Schettler

These potato cakes, known in Irish as bacstaí (derived from either bácús, meaning bakery, or arán bocht tí, or bread of the poorhouse – no one seems quite sure), are particularly popular in the north-west of the country, where they take a variety of forms, from griddled pancakes to baked wedges of bread.

What’s the easiest way to flip a boxty?

Here’s the thing with flipping the boxty. You can do this by sliding a plate over the skillet, carefully inverting it, then carefully slipping the boxty back into the skillet. Or you can use a couple of spatulas and a flick of the wrist. Or if you prefer a chunky hash, flip the potatoes over in chunks and press them with the back of the spatula to make them even.

What can I serve with Pan Boxty?

Some of our very favorite ways include fried eggs, bacon, and sour cream. How about smoked salmon, horseradish, and crème fraîche? We’ve also heard that they’re pretty fabulous with just mounds of good, salted Irish butter. 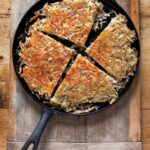 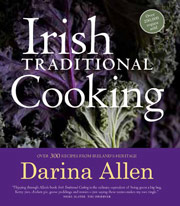 This is fun to make and fun to eat! The crisp outer layer is super and just what I’d expected, the tender inside is equally as good.

I added fresh herbs the first time I made it–parsley, some thyme, and a wee pinch of rosemary and chopped oregano–and thought it was perfect. The second time I added some chopped scallion and a lot of parsley.

The only problem I have with this recipe is that it says it serves 4, but it doesn’t tell you 4 giant lumberjacks! I found that 6 medium potatoes makes enough to serve at least 12 regular people. I would cut this recipe in half next time and invite some hungry friends over.

P.S. This was just as good the next morning with a sunnyside egg on top. Try it, you’ll love it. And when you pile lots of chopped parsley on top, you can serve it on the 17th of March!

Before I say anything else, let me explain that I’m a home fries type of gal. I’ve yet to meet any sort of hash browns with whom I’m compatible, so I was leery about me and Pan Boxty. Let’s just say that while I still swoon to home fries, I’ll definitely be cheating on them with this little number.

I was quite startled at the size of the mound of grated potatoes before me, so I used a 12-inch cast-iron skillet rather than a 10-inch so I could spread that heap of spuds into a slightly thinner cake, which was still a good inch thick. I was thinking the wider skillet may help the inside turn tender before the outside scorched. I needn’t have worried, as the Pan Boxty turned a lovely crisp golden brown on the bottom within 20 minutes.

Though I played it safe and flipped the spuds using 2 spatulas, next time I think I’ll try to flip it midair, as the cake was really cohesive, more so than any hash brown I’ve ever made. (I would love to say, for the benefit of those who need to eschew flour, that the ingredient is optional, but it’s really not. It helps create a stickiness among the shreds of spuds that makes turning the entire thing a cinch.)

The result was, as promised, the potato counterpart to a fudgy brownie–crisp outside, dense and moist inside. Full confession: I used olive oil instead of butter, but these were still, as I told my 10-year-old nephew, the world’s best and most monstrous tater tots. He didn’t argue.