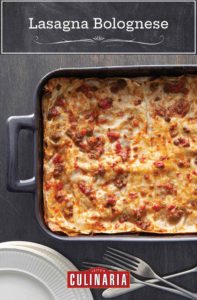 This lasagne bolognese from Giuliano Hazan is as authentic as it gets.

This recipe is a cinch to follow. Guiliano writes that you can make it over two days, but if you’re organized (which I’m not), you can make in an afternoon—which I did. My only problem was that I had to stop rolling the dough two settings before the narrowest setting that the recipe specified because the dough was stretching too thin. Thinking I perhaps made a mistake and had already rolled it into pasta oblivion (after all, I was picturing those hefty-hefty, thick-as-plywood lasagna noodles of days gone by), I posted a picture on Facebook in the hopes of getting feedback. And who should reply? None other than the doyen of Italian cooking—Marcella Hazan. She wrote, “Nice touch David, to lay out the pasta on checked fabric to display its transparency. Homemade egg pasta is at the top of the pasta pyramid, and homemade lasagne alla Bolognese commands the very peak. Why have so few refused to make that ascent? Congrats, D.L.” As you can imagine, I was practically vibrating with pride.

One cooking suggestion: Make sure to use a very thin layer of sauce between the sheets of pasta, as it helps create more layers, which benefits this dish. Also, when you’re transferring the pasta sheets from the pot to the bowl of ice water, use a wide plastic spatula and tongs. It prevent the pasta from tearing. I have a pair of OXO tongs with nylon tips, and they were great for gripping but not ripping.

What I found unusual is that Guiliano mixes the Bolognese sauce with the béchamel. I’ve always alternated them between the layers of pasta. Did I like it? Let’s just say The One chided me more than once for eating it right out of the pot. I also alternated layers of regular pasta and spinach pasta to great effect. (I really wanted to impress my guests.)

The result? Everyone. Loved. It. The lasagne was surprisingly light. It was so light, our guests were able to eat two pieces each, something that displeased The One and me immensely because there were no leftovers. None. Nada. Zilch. I guess one of our well-fed guests summed it up perfectly: “It was the best I ever had.” Next time I make this, we’re inviting no one.

Lasagne—the Italian plural of lasagna, which refers to just one sheet of pasta—is one of our family’s favorite foods. Lovingly and carefully made, Italian lasagne bears no resemblance whatsoever to those heavy American things that rest in the pit of your stomach for days after being consumed. Bolognese lasagne is a delicate dish that is light, almost airy. It is a savory concoction, with each creamy bite melting in your mouth. It must be made with homemade egg noodles, and there is NO ricotta to be found in any of the Hazans’ recipes. My father adores green lasagne, and it is what he always requests when we celebrate his birthday at our house. My wife, Lael, who before I met her was quite indifferent to lasagne, now always asks me to make it for her birthday as well. Lasagne are often judged on how many layers they have. Five or six layers are considered the minimum. For Lael’s most recent birthday celebration, I made a spectacular nine-layer lasagne. It was absolutely worth every ounce of effort that went into making it. In addition to being a principal component of lasagne Bolognese, Bolognese sauce is so good on its own that it is a staple in our house. It freezes very well, so whenever I make it, I always make enough to last us for three or four meals. Its ideal pairing is with homemade egg pasta, particularly pappardelle, but it’s also wonderful with chewy, substantial shapes of dried flour-and-water pasta such as rigatoni, shells, and cartwheels. It’s not at all suited to spaghetti, which does not catch the sauce well. (Spaghetti with meat sauce is found in Italian-American cuisine but never in Italy.) The sauce recipe below makes enough for 1 pound of dried pasta. In Italian, béchamel is called besciamella, and the dispute as to whether it was the Italians or the French who invented it will probably never be resolved. It is a white sauce that is quite commonly used in Emilia-Romagna, particularly in baked pasta dishes. It is easy enough that a child can make it (with supervision), and our kids have become quite proficient at it.–Giuliano Hazan and Marcella Hazan

LC What To Do When Note

As Giuliano Hazan (yes, that Hazan) explains in his book, Hazan Family Favorites, he has “a routine now” when he makes lasagne, which makes the process “fairly easy.” His secret? He savvily spreads the cooking of this epic, authentic lasagne over two days: “The first day I make the Bolognese sauce, which only requires about 30 minutes of my time—because once all the ingredients are in, it cooks on its own. The second day, I begin by making the dough for the pasta; while it rests, I make the béchamel. Then I roll out the pasta, cook it, and assemble the lasagne. The second day’s work requires a little over an hour of my time, not counting baking the lasagne.” Seems simple—and doable—enough to us. 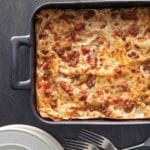 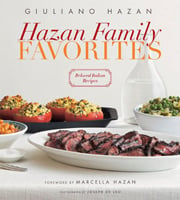 For the Bolognese meat sauce

For the lasagna noodles

For the béchamel sauce

For the lasagne assembly