I have never been very good at desserts. I don’t have the personality of a good pastry chef, which includes patience and precision. Anyone who knows me can tell you those are virtues I simply don’t possess. Fortunately, my former executive chef at The Mint, Jordan Boutry, does everything, including desserts and especially this huckleberry crisp, very well.–Jay Bentley and Patrick Dillon 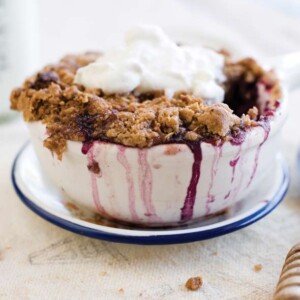 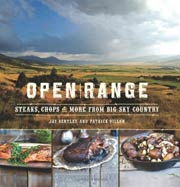 For the crisp topping

For the huckleberry filling

For the whipped cream

Tonight was an unseasonably cool spring night and what could be better? A nice berry crisp warm out of the oven! I substituted blueberries for the huckleberries, and I must say, this was delicious. The port added a certain richness to the berries; however, the crumb topping is the hero here. I have a favorite crumb topping that I’ve used for years, but I think it just got trumped! The almonds really make this. I’d consider using some raspberries and blackberries along with the blueberries and serving it all summer long. I’d also sub vanilla bean ice cream for the whipped cream. It’s so good that my daughter said to me, “You must be an angel sent down from heaven.” I guess that says it all.

I made this recipe with blueberries, as I was unable to locate huckleberries. I’m generally not a big fan of blueberry pie or crisp dishes, but I had almost all the ingredients, including some of the homemade vanilla bean ice cream from the LC site, so I thought that this was reason enough to give this recipe a go. I’m so glad that I did, because this was really, really good! I loved the crisp topping with the slivered almonds, which added nice texture. I also liked the added flavor from the cinnamon and nutmeg. It had just the right amount of sweetness; it wasn’t so sweet so that it overwhelmed the flavor of the blueberries. I cut the recipe in half, because I didn’t need that much dessert sitting around, but based on the half recipe that I made in an 8-inch Pyrex pan, I think that the full recipe would fit nicely in a 9-by-13-inch pan or maybe even an 8-by-11-inch pan. Also, in lieu of port for the blueberry mixture, I used a raspberry framboise, a dessert wine that someone had given to me. I think that it was a good substitute. I actually put the crisp topping in the freezer while I prepared the filling and this made it very easy to crumble the topping over the filling. This baked up perfectly in 35 minutes. I’ll definitely make this again and will use this crisp topping for other fruit crisps.

We LOVE any dessert ending with “crisp,” “betty,” or “crumble,” and this Huckleberry Crisp is now at the top of our list! I did substitute blueberries for the huckleberries. I baked the crisp in eight 6-ounce ramekins, which were crisp and bubbly at 25 minutes—just waiting for the whipped cream. If the fruit had been really tart, I would’ve added more sugar to the filling. The port gave a fragrant note to the filling and blended beautifully with the blueberries. The crunchy, spicy, and buttery topping with toasted almonds was fragrant and beautiful. Impressive enough for company but rustic enough for every night. I’m still thinking of other fruit possibilities for this summer, like peach and raspberry or nectarine, apricot, and blueberry.

Bottom line, this is a delicious crisp that I’ll be making again. I made this recipe substituting blueberries for the huckleberries. A great choice. I divided the recipe in half and made it in a 9-inch square Pyrex dish. I cannot believe that I’m saying this, but there was far too much topping to put on the mixture in the baking dish. After piling the topping pretty high, I wrapped up the extra and put it in the fridge. It won’t go to waste. After being in the oven for 30 minutes, the crisp was done. It did produce a lot of excess liquid. Delicious liquid, but still, quite a lot in the bottom of the pan after spooning out a few servings. As far as portions are concerned, that 9-inch square baking dish of crisp could actually feed close to 8 people.

This was amazing the day it was made and it was equally good reheated the next day. The whipped cream puts it over the top. I’m not a fan of cooked fruit, but these berries (I substituted blueberries for the huckleberries) burst open in your mouth in the most delicious way. I made this for my son’s playgroup and omitted the port since children were eating the crisp. I also halved the filling recipe, which still filled my 9-by-13-inch baking dish along with the topping. There was a bit of topping left over, which we heated up on a baking sheet and crumbled over ice cream.

What’s great about this recipe is that you can have the entire thing assembled before your oven has finished preheating. I decided to make mine with blueberries and baked it in ramekins. The berries release lots of juice as they cook, and the filling becomes fairly fluid, which makes the ramekins a perfect serving vessel. Be sure to really pack in the crisp topping so there’s a nice even coating over the top. I skipped the whipped cream, as I like crisps with ice cream better. This recipe is sure to delight.

That said, I don’t feel that the portioning for the ramekins is correct. There’s just no way that you can fit all that filling into 6-ounce ramekins. I used 2/3 cup per ramekin, and as long as you really pack in the topping (which is also enough to make well more than the specified number of servings) it’ll come out full. I highly recommend using a foil-lined sheet pan (or something similar) to catch any overflowing juices. Even with only using 2/3 cup, mine still overflowed a little.

This crisp was loved by my guests. I used blueberries, as I couldn’t find huckleberries. Next time I’ll use blackberries to add a little fruity bite to the crisp that the huckleberries would’ve provided. One problem I had with the recipe is that it produced a lot of thin blueberry and port sauce and was quite messy to serve. I’m wondering if the huckleberries would’ve thrown off less juice than the blueberries. Even though the dessert wasn’t congealed to make for a nice scoop, its rusticity was much appreciated by my guests.