Rumor has it “mojito” translates roughly as “little spell.” With all that white rum, lime, and mint, well, yeah, we’ll willingly be under its spell.

Though Hemingway popularized the mojito with a single backhanded compliment to his favorite Havana watering holes, declaring, “My mojito in La Bodeguita, my daiquiri in El Floridita,” the cocktail’s origin can be traced back to the sixteenth-century el Draque, a crude blend of lime, sugar, and aguardiente, invented by pirates on expedition with Sir Francis Drake. [Editor’s Note: Aguardiente is an anise-flavored, sugarcane-based liquor that roughly translates to “firewater.” Sounds like our kind of elixir.] Eventually, the aguardiente was replaced with smooth, light-bodied rums elaborated in the late 1800s and the mojito was cast. This recipe comes from my uncle Guillermo Tremols who learned it from Deus, a bartender at Havana’s Miramar Yacht Club.–Ana Sofía Peláez

What kind of sugar should I use?

Lest you think the only brilliance in this recipe is the taste, you’re wrong. This mojito recipe cleverly calls for confectioners’ sugar rather than simple syrup or granulated sugar. Because it dissolves just as readily as simple syrup and far more so than granulated sugar, this means no more stirring like crazy and still having gritty granulated sugar at the bottom of your cocktail or having to wait to take the time to make and chill some simple syrup before you take a sip. 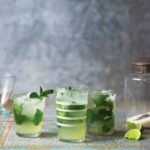 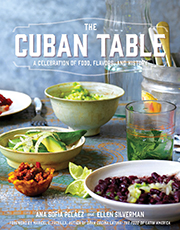 I am currently reading Ernest Hemingway’s A Moveable Feast. I thought that drinking some mojitos would be fitting. I love them. And although I’ve never been able to replicate at home the amazing flavors and experiences that I had while drinking mojitos in Puerto Rico, this recipe came close.

The mojito was the nice mix of flavors that I expect. I appreciated that it wasn’t overly sweet. I liked using the club soda for fizz—I’ve tried some recipes with lemon-lime soda and always find the finished product too sweet. The bitters added a nice depth of flavor, although I think I might try making another batch without them for comparison (I was planning on making 2 batches, one with and one without, but I got excited and put the bitters in the entire batch.)

I had wonderful spearmint from my garden to use, and I don’t own a muddler, so I used the end of a large wooden spoon to bruise the mint. In the end, a refreshing cocktail to enjoy with my book on a sunny summer afternoon.

This recipe makes the perfect mojito. Really it does. The balance of lime and sugar is perfect. Mojitos are supposed to be sweet, and this one is, but not in excess. It’s not shy about the mint, either, which is as it should be. The optional bitters are a nice touch, rounding out the flavor and adding a hint of complexity. Add to all that the fact that you can mix it up right in a highball glass—no need for a shaker, no need to make simple syrup—and you might find yourself with a new favorite after-work libation.

This mojito is refreshing, exotic, and simple. Just what I was looking for on a sweaty, humid Saturday, the kind where the air is so thick that you can barely take a deep breath. The superfine, powdery confectioners’ sugar required no effort to dissolve, and there were no coarse sugar granules tearing the mint into bits while muddling (which means no fear of green in your teeth).

The amount of lime juice called for here perfectly balanced the sugar, and I appreciated the inclusion of a measurement so I can mix the perfect drink no matter how juicy my lime is. This made a stiff drink, but it didn’t taste too strongly alcoholic. Saving this one for next year!

This mojito method is a useful recipe to have in your summer toolkit—you can pull it together in a matter of minutes if you have fresh limes and mint on hand. Normally I’d use granulated sugar to help muddle the mint over ice, but this recipe has you muddle confectioners’ sugar before the ice. The sugar actually dissolved readily with this method, but I was curious whether more mint flavor would be released if I put a bit of crushed ice in the bottom, so I made the cocktail more than once. With the ice, the mint gets more thoroughly smashed, but the sugar might not completely dissolve. That can be remedied with a few stirs of a spoon though.

The other question was whether it really needed this much sugar, and, of course, that will be a matter of personal taste. I found 1 1/2 tablespoons too sweet. I made one for my husband with just a teaspoon, and that wasn’t quite enough, but I tried 2 teaspoons next and settled on that as my sweet spot.

The club soda and lots of ice makes this mojito a perfect long drink for summer. You can use Pellegrino in a pinch, but I think club soda works better if you have that on hand. The bitters really add a nice extra flavor. Using either superfine sugar or confectioners’ sugar mean a mojito doesn’t require the extra step of making simple syrup ahead of time.

This mojito recipe makes for a very good version of the famous drink with just a small tweak. I made the recipe first as written using the confectioners’ sugar. The flavor was okay but flat and, probably since powdered sugar has corn starch in it, the drink was a bit murky-looking. Using powdered sugar also made muddling a bit less efficient and resulted in a less pronounced mint flavor.

That being said, the next couple of times, I tried the recipe with regular granulated sugar (1 tablespoon plus 1 teaspoon), and this worked a lot better. The mint was easier to bruise, the flavor was brighter, and the drink looked great. I liked the idea of adding a few drops of Angostura bitters at the end. It was a nice accent and added a hint of spice to the smell and taste of the drink. I used about 6 drops.

I love that the instructions don’t ask us to mash the mint leaves but just to bruise them. Mashing the leaves to a pulp gives cocktails a murky drab color and an over-extracted oxidized flavor. Building the mojito in a glass is fine, but I prefer to muddle and make the drink in a shaker then pour the contents into a glass.