These sweet and sour green beans are made with bacon, vinegar, sugar, and mustard. A perfect side for everyday or holidays, like Thanksgiving. 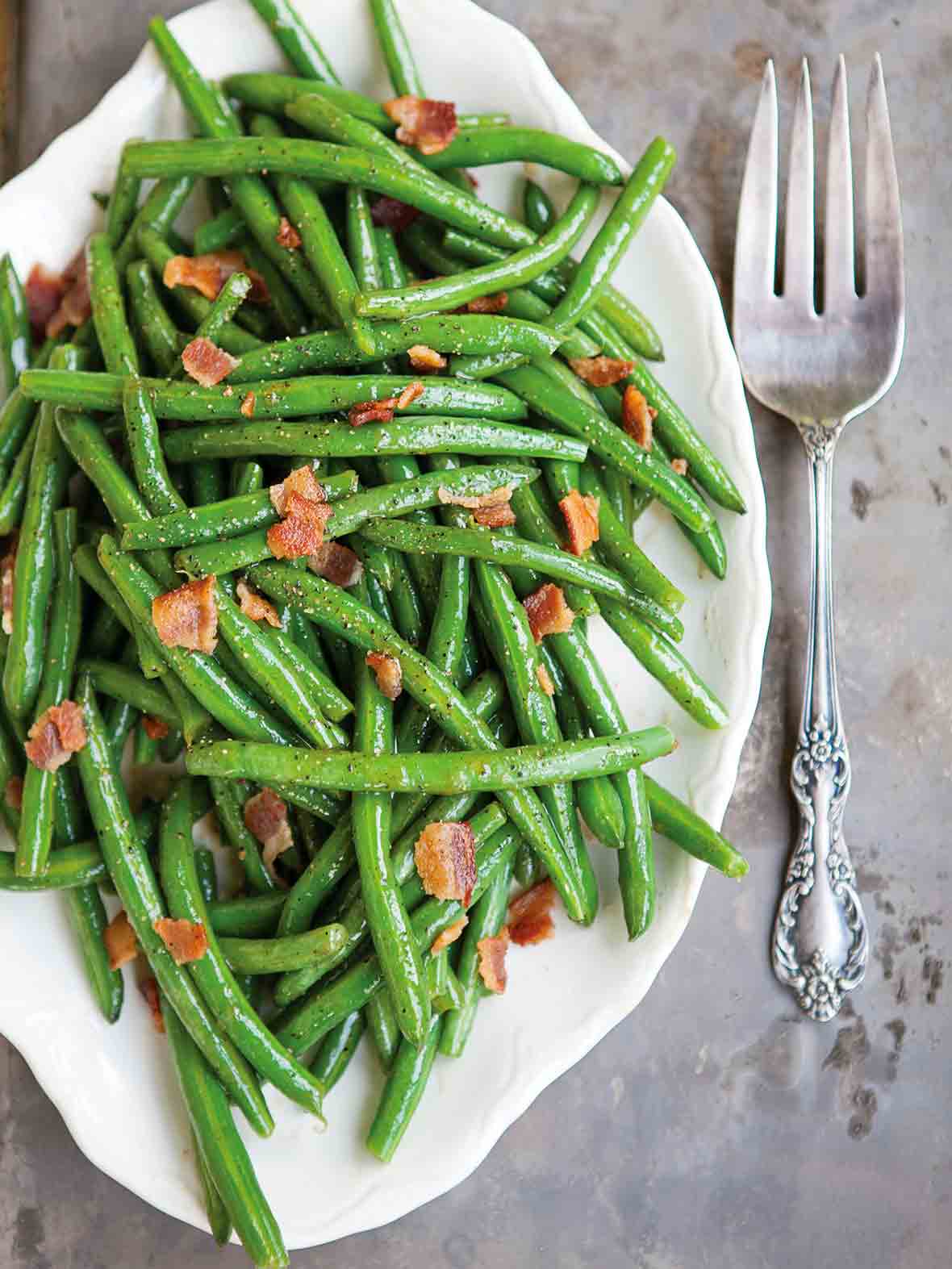 I bet even green bean haters will eat these sweet and sour green beans. The smoky bacon and sweet and tangy sauce that clings to these green beans brings a little something different to an otherwise normal vegetable.–Stacey Little

When making these sweet and sour green beans—heck, when making any green beans—it can be tricky discerning exactly when to pull them from the heat. A lot depends on you—specifically, whether you’re a slightly crunchy versus super tender sorta person. Much also depends on the girth of the green beans and whether you’re using sturdy regular green beans or slender haricots verts. What works for us in terms of knowing when to pull them from the heat is quite simply 1. not walking away from the stove, and 2. sneaking a green bean and giving it the nibble test. We like to try a little tenderness.

Fry the bacon in a large skillet over medium heat until crisp. Remove the bacon from the pan and let it drain on paper towels or a brown paper bag.

Pour the mixture over the green beans, crumble the bacon over the top, and cook until the sauce thickens and coats the beans, about 2 minutes. Serve immediately.

I loved this sweet and sour green beans recipe! The smokiness of the bacon, the tartness of the vinegar, and the sweetness of the sugar made these beans yummy. The beans were tender but still had a little crunch, as did the bacon. It was a snap to put together. A nice change from my usual steamed green beans tossed in a little butter and fresh basil. A winner!

We all know that green beans pair beautifully with bacon, right? Well, this easy sweet and sour green beans recipe takes it a step further. Not only is the original pairing there, but you add a sweet yet tangy mixture of dried mustard, vinegar, and a touch of sugar that coats the beans beautifully. In terms of the recipe itself, I used fresh haricots verts and sherry vinegar instead of white vinegar because that's what I had on hand. The green beans, once added to the pan of bacon grease, took 4 minutes to cook over medium heat. I don't like my beans mushy but perfectly crisp and a bit tender on the inside. A simple yet tasty recipe that I will be making again, especially during the summertime grilling season.

I was sure the flavors would work, and I was not disappointed. Easy stir-frying means getting your mise en place done before a pan is heated. First, wash and trim the beans so they can drain and be patted dry and you can avoid splatters when the beans hit the bacon fat. Also, that way, you don't create a braise rather than a stir-fry. I freshly ground pepper and yellow mustard seeds, but it would be fine to use Colman’s or another dry mustard. I mixed the dry spices and cornstarch, added a little of the vinegar to make a slurry, and added the rest of the vinegar and whisked. The prep is all done in 10 to 15 minutes, and then you can cook the bacon. Once the bacon was cooling, I pulled the pan off the heat until I had the cooled bacon crumbled/chopped. It looked like way more fat than necessary, so I poured the bacon fat out, wiping the pan and noting it had rendered about 1/4 cup. This will vary depending on your bacon, but when I added fat back into the pan, I only used 1 1/2 to 2 tablespoons. The beans were crisp and nicely browned after about 6 minutes, and I used tongs to move them around the skillet, as it was a bit full. Once you add the vinegar-spice mixture and the bacon back in, the sauce will thicken in under a minute as you continue to toss the beans and coat everything evenly, 1 to 2 minutes at most. The flavors worked beautifully—just the right amount of tang, smoke, and crunch. I think the fact that someone (we’re not naming names here) thought it was scrumptious enough to mysteriously wipe the skillet clean (!) afterwards says volumes.

I would probably move this to a wok next time, and for a wok version, you could slice the bacon in 1/4-inch slices, stir-fry, and remove. Then the beans would have more room (you can briefly use a splatter screen on either the skillet or wok while the beans are cooking to help them cook quickly and retain the steam they're creating). You do need to watch the bacon more closely in a wok, as everything happens more quickly. You also could use pancetta, cut into lardons. I used freshly ground yellow mustard seeds—you could play with the mustard and pepper in this recipe to adjust the level of heat. Brown mustard seeds will be hotter and closer to Chinese-style mustard. (Colman’s is a mixture of brown and white mustard and is considered a hot mustard. If you have concerns about whether mustard contains wheat, dry mustard powder should only contain mustard, whereas prepared mustards may contain some wheat. The UK Colman’s website has more ingredient information than the US one http://www.colmans.co.uk/products/mustard-powder).

Fresh green beans are a staple in our house, and I sometimes find myself in a rut when it comes to their preparation. This sweet and sour green beans recipe made a pleasant change from our routine of steamed green beans with butter and lots of black pepper or steamed green beans with toasted nuts. The sweet and sour effect was subdued enough to not be overpowering but worked well with the smokiness of the bacon. It turned out almost like a warm salad. For even more variety, I used fresh haricots verts in this recipe. After the beans cooked 11 minutes in the bacon fat, they were on the crisper side of tender, which I didn’t mind, but my husband thought they were a mite too crisp. They had started to brown enough that I was afraid they would burn if they cooked much longer. Thicker green beans would take longer to get close to tender. If I make this again, I think I might blanch the beans and dry them before cooking them in the bacon fat. Maybe it’s because of the kind of beans I used or the kind of bacon, but I think this could've used a little less bacon for the amount of beans.