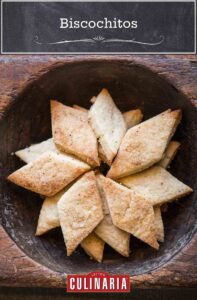 These biscochitos are a New Mexican Christmas cookie classic. Their trademark flaky texture and flavor comes from using lard in the dough, along with cinnamon, sugar, anise, and brandy.

Biscochitos (pronounced be-sko-chee-to) boast historical significance for being declared the first official state cookie by New Mexico back in the late 1800s. The classic Christmas cookie is traditionally rolled and cut into shapes, although those pressed for time or bored by such efforts can instead shape the dough into a log and simply slice and bake the rounds.

The form is far less critical to the biscochitos experience, though, than the truth behind the tradition, which is the flaky texture, lent to the cookie by rendered lard, and the taste, which is not too sweet and with a faint touch of anise. Yes, lard in a cookie.–David Leite

Tester Deneen M. loved that these cookies are “super flaky and tender” and “not too sweet.” The dough is easy to make, comes together quickly, and is a breeze to roll and cut.

Biscochitos are lightly sweetened cookies made with lard and anise seed. They have a texture similar to shortbread and are often cut into star shapes. They are usually served dusted with cinnamon sugar.

How do I toast anise seeds?

To toast anise seeds (or, for that matter, any seeds, including cumin, coriander, caraway, and so forth) place them in a dry skillet over medium heat. Allow them to toast for about 2 1/2 minutes, stirring or shaking the skillet often, until fragrant. Immediately remove the skillet from the heat and transfer the seeds to a plate to stop the cooking.

Can you freeze biscochito dough?

Yes, you can. The unbaked dough can be frozen for up to 1 month. Baked and cooled cookies can be stored in an airtight container in the freezer for up to 3 months. 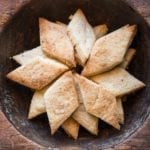 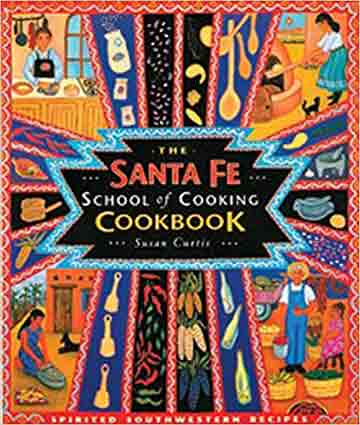 This biscochitos recipe makes exactly the kind of cookie I like. Super flaky and tender (could have a lot to do with the leaf lard I used), not too sweet, and a tiny bit herbal from the anise seed.

It was also an incredibly easy dough to work—it came together quickly and rolled, cut, and (most importantly) transferred well from the work surface to the baking sheet. I started adding the flour to the lard mixture by hand but thought better of it and put it back in the stand mixer, which made it really easy. Also made adding the brandy a snap. I was able to roll the dough to 1/8-inch thickness with no problem.

I ended up with 10 dozen biscochitos. I used a ruler and pizza cutter to cut them into diamonds that were 1 1/2 by 3 1/2 inches. I really like the end result. I might increase the anise just a little the next time but overall, really good.

I will definitely make these biscochitos again.

This biscochitos recipe was what youʻd expect. The process was good and everything baked well. My husband brought them into his office and people loved them. While I found them a little on the savory side, they were quite popular.