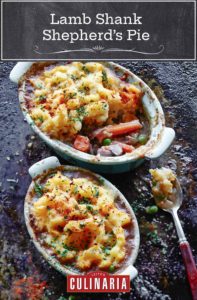 This shepherd’s pie strays a touch from tradition, relying on tender braised lamb shank rather than the typical ground lamb. Call us rebels.

This shepherd’s pie recipe is partly true to tradition by keeping with the expected lamb although it relies on tender braised lamb shanks that’re gently stewed until fall-apart tender in place of ground lamb. No complaints here.–David Leite

Does lamb get more tender the longer you cook it?

Yes. That is, lamb shanks. Different cuts of lamb require different cooking approaches. But shanks of any sort do well with braising, or cooking low and slow in liquid until you coax the toughness to dissipate and what results is meat that falls apart into shreds at the merest tug of a fork. Although the meat starts tough and after an hour or two it may remain tough, relax and continue to follow the recipe. The lamb will eventually succumb. 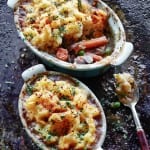 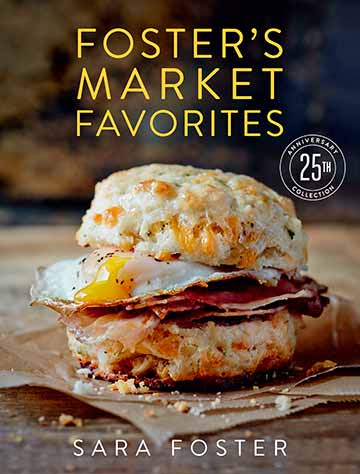 For the lamb stew

For the potato topping

Let’s start with the brilliant combination of Yukon Gold potatoes and sweet potatoes. I made sure to mash everything very lightly so that it was still chunky. I also made sure to unevenly spread it over the lamb, thereby creating craggy hills and valleys of potato, some parts getting a little bit crisp, some parts remaining smooth and creamy. I used slightly less than 3 pounds potatoes instead of 4 pounds, and I felt that there was still plenty of potato topping. I had some concerns about cooking both types of potato in the same pot, and ended up cutting my sweet potatoes slightly larger than the Yukon Golds, which worked out well, as they were both pretty evenly done at the same time. I also used a pale-fleshed sweet potato called a “gold” that was not candy sweet.

Now let’s talk about what’s underneath that creamy layer flecked with rosemary and paprika. Luscious chunks of lamb, slightly crisp carrots, and an earthy red wine sauce bolstered with the addition of the lamb cooking juices. I deviated when the instructions called for adding the lamb and carrots to the thickened braising liquid by only adding the carrots, as I really thought they stood a better chance of cooking in 20 minutes without everything else added in. When the carrots were done, I added the lamb to warm it through and then poured everything into my baking dish.

My final word of advice is use a decent red wine for the braising liquid and the sauce. You’ll be glad you did because you’ll be sipping the rest of the wine while you spend the afternoon in the kitchen putting it all together.

Be sure to invite friends over to share, as there will be plenty. Serve the lamb shank shepherd’s pie with a salad of frisée and pickled golden beets dressed with a mustard seed vinaigrette and more of that delicious red wine that you used for cooking. That’s what I did.

All the comfort of regular shepherd’s pie with the oh-so-flavorful and very tender lamb shank meat that really elevated this dish. This shepherd’s pie recipe is a little time-consuming but well worth the effort!

I braised the lamb shanks early in the day and 2 1/2 hours braising time yielded fork-tender lamb. For some reason, I lost quite a bit of liquid during this time, though I’m not sure why. I used a sturdy Dutch oven and initially had about 4 cups liquid. After the braise I had only about 1 1/2 cups liquid left, half of which was fat. I used the defatted braising liquid and topped it off with beef stock. I found that the recommended 2 cups stock plus 1 cup wine was not enough, and the liquid was too thick as it cooked. I added an extra 1/2 cup stock to give it a thick but not gloopy consistency.

I mashed the potatoes with sweet potatoes, and this was really delicious, though I found the potato mixture a little dry after mashing and ended up stirring in 1/4 cup whole milk because I knew it would dry a bit more in the baking process.

Overall this was very delicious. Wine was a Malbec (since it was already open!). I found all the timing recommendations to be accurate.

My spouse has had his share of shepherd’s pies—they were a frequent Monday meal following a Sunday roast made by his mum. This is not quite your mother’s shepherd’s pie—it is something just that extra special bit beyond yet true to the origins. Since we knew this was going to be a bit posh anyway, we used a well-aged zinfandel from the Sierra Foothills, the best local organic lamb shanks we could find, and a combination of butternut squash and Yukon Gold potatoes.

I checked on the lamb halfway through the cooking and added 1/2 cup water, as the volume seemed to be dropping a bit even though the lid was on. When I removed the meat from the bones, I had 4 cups meat and just barely 2 cups broth. I put the meat back in the broth. By cooking the lamb the day before, the stock jelled beautifully, and it was easy to remove the chilled fat layer. Note that you will want to slightly reheat the meat-broth mixture (microwave for just 1 minute or so) in order to separate the broth from the the meat for the second phase of the recipe—this caught me off guard as my meat was in a solid jelled block when I started the sauce! Easily solved.

Don’t worry about cutting or shredding the meat into smaller pieces because as you heat the meat in the juices, it will naturally pull apart into smaller pieces without any effort. For my vegetables, I used deeply colored heirloom maroon carrots with a dark orange interior and a mixture of peas and edamame beans, so the dish was slightly less sweet than if made with the more sugary carrots and peas combo. I used a combination of thyme and rosemary, with more restraint on the rosemary so it wouldn’t be too dominant, and I was generous with the thyme.

When you add the flour to your onions, you are going to see it develop into a golden, slightly dry-looking roux, but it all worked into a beautiful sauce with just the right thickness. Because my broth all came from the cooking of the lamb, I adjusted the salt and pepper at the end of the cooking of the filling. If you use a prepared or canned broth, you may already have plenty of salt. I liked the combination of the butternut squash and Yukon Gold potatoes.

This rustic-looking pie becomes golden brown on the peaks with maybe an extra 5 minutes in the oven (it took 35 minutes to get to where the filling was sizzling hot and the topping sufficiently brown). I do recommend placing a pan underneath whatever size casserole or dishes you use as you might otherwise have a little bubbling excitement to clean up in your oven.

The wine I used for cooking was a 2005 Story Winery Red Passion Zinfandel—nice and sturdy, as most Sierra Foothills zins are. I cooked the lamb the day before in the oven, scenting the house with wonderful roast aromas, and then served it in oval roasting dishes, which worked perfectly for us to split the lamb in 2 batches for our small household to enjoy (and if you were to set that second portion of meat aside by freezing it, you would be all set for a second meal later in the season when you are too busy to cook a project meal). We happily enjoyed this for several days.

The first portion was cooked in a 7-by-10-1/2-inch (1.175 liters) oval ceramic dish, and on day two, we reheated it covered with foil at 350℉ for 30 to 40 minutes. Since it had remained crisp on top, I didn’t remove the foil, but of course that may vary with your topping choices. It did not dry out or get soggy—it was still absolutely delicious. We are happily looking forward to repeating this recipe again! This is absolutely something you can serve to guests.