This Philly cheesesteak is an easy and authentic sandwich from South Philly, made with thinly shaved beef and the perfect seasoning, that you can make at home rather than traveling and having to choose between Pat’s and Geno’s. Here’s how.

Philly cheesesteak. It’s essentially a sub roll piled high with thinly sliced and seasoned beef, caramelized onions, and melted cheese. What’s not to love? Well, folks have been debating the distinctions and nuances of various renditions of the Philly cheesesteak for decades—-the presence of anything other than onions and cheese, the type of cheese, the particulars of the roll, and that’s to name just a few. So while this undeniably delicious version won’t make everybody happy, it will make most folks unspeakably satisfied. Besides, people pleasing is overrated.–Angie Zoobkoff

*How do I slice my steak thin enough?

You can argue all day and night about what goes on a Philly cheesesteak. But if you ain’t got the meat right, then it’s not a Philly cheesesteak to start with. The essential element to the sandwich, beyond anything else, is incredibly thinly sliced meat. You can achieve this through a number of strategies, according to the authors of Eat Street. Here’s how… Grab a whole 18- to 20-pound rib eye at the meat market and lovingly carry it out of there like you’re Richard Gere and this piece of cow is Debra Winger at the end of An Officer and a Gentleman. Take it home, trim most of the fat cap, then blast chill it to an internal temperature between 26 and 28°F. Run it through a slicer at a level thin enough to almost see through it. Or…Find a butcher from that same market to do everything above in your chosen quantity (minus the Gere/Winger show). Or…Visit an Asian supermarket and grab the pre-packed super-thin beef slices used for Korean BBQ. 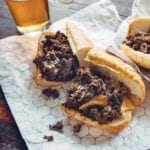 This Philly cheesesteak is an easy and authentic sandwich from South Philly, made with thinly shaved beef and the perfect seasoning, that you can make at home rather than traveling and having to choose between Pat’s and Geno’s. Here’s how.
Prep 15 mins
Cook 45 mins
Total 1 hr
Mains
American
4 servings
1095 kcal
5 / 3 votes
Print Recipe 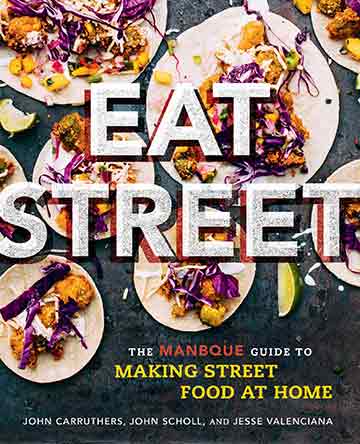 Philly cheesesteak research is fun! Realizing you can make it at home and make it your own is priceless. Having recently visited Philadelphia and sampled cheesesteaks, I already was in research mode and made a point to talk to the cheesesteak-wallah and watch my favorite one being made.

I knew the secret was thinly sliced rib eye, and am not shy about asking a butcher to slice it for me. If you go that route, I suggest you freeze the sliced meat in portions so you are ready to go whenever the spirit visits. I bought some nicely marbled rib eye at my local Asian market. I think real Wagyu or Kobe is probably over the top dollar-wise, but the Korean-style suggested or domestic Kobe-style or prime rib eye sliced thin for sukiyaki was just right.

My first version was straight to the recipe except for portion—8 ounces per person is too much meat for us, and I knew that from sharing cheesesteaks in Philly as well as my versions at home. I used 4 ounces per person, the meat coming from the fridge into the pan. I toasted a petite baguette sliced almost through lengthwise to go with and the sourdough roll stood up well to the meaty, cheesy goodness inside. Although I was cooking for just 2, I did the full quantity of onions and in a skillet, it took a bit longer to get to that perfect brown mess. I like keeping a water bottle handy to spray as you go along, capturing all the fond. I decided patience was called for, so 10 to 12 minutes later I was rewarded with a nicely evenly browned onions approaching caramelizing.

I reserved half for the next day in the fridge. Using a metal Chuan (flat edge wok spatula), and a second wooden spatula, I broke up the meat and mixed in the onions, then laid the provolone slices (the full whack of cheese) on top and covered. Perfect melt. Then I served them up on the toasted rolls.

The second day I used the prime rib eye that was marked for sukiyaki. This parcel (8 oz for the two of us ) I had frozen overnight, and took out 20 to 30 minutes before cooking. I feel the frozen meat (shaved or sliced thin) is much easier to work with, as you can actively flip it back and forth as it cooks and browns, scraping off the cooked bits. This is the method I learned watching the folks at Carmen’s in Reading Terminal Market. I also borrowed their addition of sliced golden peperoncini and used a mixture of sliced provolone and pepper jack. This was perfection for our taste.

This is a very forgiving recipe. I suggest freezing the meat overnight, then slightly thawing. It helps you gain better control when cooking it.  Without a griddle, I was still able to make this work in a large cast iron skillet for two people. For a larger crowd, you’d want 2 pans or batches but I wasn’t able to test that.

We don’t have Philly cheesesteaks at our house very often because of a fresh pepper allergy. So when we saw this recipe without the peppers, we were very excited to try it. This is quite good.

We picked up a sirloin tip roast and partially froze it to slice as we have our own slicer. The sliced meat took 15 minutes total as we cooked in 3 batches over a medium-high heat before combining it with the onions. It was easy enough. We didn’t miss the peppers. I found it a little salty and one taster found the garlic almost too prevalent. When I make this again I’ll cut back on the salt in the seasoning to 2 or 3 tablespoons and only use 1 teaspoon each of the garlic and onion powder. Other than a couple minor changes a real keeper.