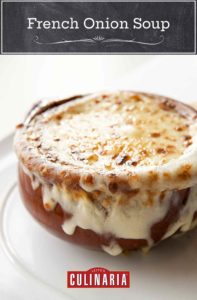 This French onion soup tastes just like the classic, with plenty of onions and leeks in a rich homemade broth. Here’s how to make it.

Adapted from Frank Mentesana | Jerome Audureau | Once Upon a Tart | Alfred A. Knopf, 2003

Most French onion soup recipes create a gooey, stringy, clingy cheese trampoline that clamps down on the soup dish as it melts, creating a sight to behold but a mess to eat in polite company. Not this recipe, which calls for a simple sprinkling of cheese on toasted bread rather than over the entire bowl. This not only makes for easier eating but a little more room to experience the complexity of the blend of caramelized red and yellow onions as well as leeks. It also means you can indulge your whim for French onion soup even when you don’t have cheese with Super Glue-like stick-to-it-iveness.–Renee Schettler

HOW ARE FRENCH AND ENGLISH ONION SOUP DIFFERENT?

You’d be forgiven if you thought there was just the one kind–French–because it seems to be more common. And, to be honest, they’re similar but not quite the same. They’re both made with a LOT of onions in a brothy base, and both have bread and cheese. They’re both made in the same way, sautéeing onions, adding broth, and broiling to melt and bubble.

French is made with beef broth, red and/or yellow onions, thyme, and often red wine, brandy, or cognac. English onion soup can be made with any broth you prefer, any combination of onions (red, white, shallots, leeks, and more), sage, and Worcestershire sauce.

Finally, it comes down to the bread and cheese. Both of these beautiful soups are topped with a crusty slice of bread, then the whole thing is covered with a pile of shredded cheese. In French onion soup, you’re probably going to use baguette and a delicious, melty cheese like Gruyère. Emmental and Swiss are other excellent choices. English onion soup uses any type of bread that’s dense enough to withstand that hot broth but the cheese of choice is Cheddar. 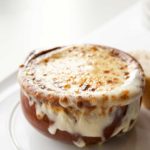 Revelation: The BEST French onion soup ever is NOT made with beef stock. Using chicken stock was a real revelation. We really enjoyed this soup.

The addition of red onion and leeks really made for a richer soup. And the onions were cut in smaller pieces than specified in other recipes, so they didn’t dribble down our chins when we were spooning them out of the bowl. We used a combination of regular Gruyère and an aged Gruyère for the topping and it was superb. Our house guest, who had said he wasn’t a fan of French onion soup, ate his all up and asked for seconds.

Rich and sweet, the soup balances well with the saltiness of the Gruyère crouton on top. Although it’s just as good without the crouton.

It takes some time to pull all the ingredients together, but it’s still a simple recipe and definitely worth the effort. It will make a great snow day meal, sometime.