Adapted from Mayada Anjari | The Bread and Salt Between Us | Lake Isle Press, 2018

Popular in Syria, this hearty vegetarian stew laden with eggplant, potatoes, and tomatoes is simple to make and comforting as heck. And it contains a lovely trick of layering the vegetables and leaving them alone during cooking. Seriously, resist the temptation to stir. You’ll thank yourself later.–Angie Zoobkoff 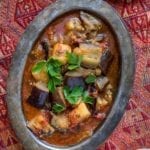 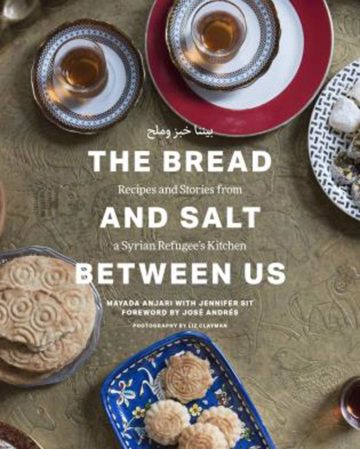 As my eyes went down the list of ingredients for this eggplant stew and saw just two spices—sweet paprika and black pepper—my first thought was “I bet this is going to be pretty bland.” Well, I was delighted to be proven wrong. The stew was flavorful in the most humble and familiar way, like something I would have grown up eating, even though my childhood was spent far, far away from Syria. I loved that the potatoes tasted like potatoes and the eggplant wasn’t overpowered by aromatics.

You’ll like the layering technique. It works well in terms of the doneness of each vegetable, but it also buys you time to prep the ingredients as you cook. With the second stir, I got to the bottom of the pan and scraped off the browned bits and incorporated them into the rest of the stew, giving it an added depth of flavor. The recipe says to serve immediately, but I really enjoyed this stew the following day at room temperature. If you’re so inclined to make your own bread to go with this dish, I’d suggest Mkate Wa Ufuta (Zanzibar Sesame Bread)

This is a homey, comforting, and versatile eggplant stew. I used sweet potatoes in place of white potatoes but otherwise followed the recipe exactly. The cooking times were right on and in the end, the eggplant pieces were soft and unctuous, the tomatoes had broken down to create a savory sauce, and the potatoes were creamy and filling.

This could be a side dish with any grilled meat or the center of a rice bowl for a vegetarian meal. I served it over brown rice with a generous topping of fresh parsley, a lemon wedge to bring some additional acidity, and a side of peach and jalapeno chutney. The only comparison I can think of is to say that it reminded me of a Syrian take on ratatouille. This is a vibrant veggie dish that you could make year-round and serve in any number of ways.