This fritto misto amalfitano is an Italian-inspired fried seafood appetizer platter made by frying mixed seafood to create a sigh-inducingly crisp crust and tender, not tough, seafood. So long, soggy calamari.

“Every port in Italy has a fried seafood combination plate, but not too many have good ones. On the Amalfi Coast, however, they know how to do fried seafood right. The key is to make sure the oil is at the right temperature,” explain the authors of this cookbook. You’ll note that the oil is astoundingly low at 275°F (135°C) and may seem to defy most contemporary deep-frying logic. Yet, as our recipe testers will attest, it ensures your fried seafood remains sigh-inducingly crisp and the seafood exceptionally tender. As for those fried lemon slices, they’re a memorable Amalfi Coast tradition we’ll gladly appropriate.–Renee Schettler Rossi 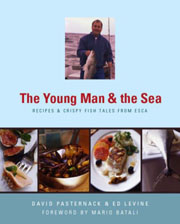 This is a unique approach to frying fish with unique results. While it takes a watchful eye to keep the oil temperature below 280°F, the results are worthwhile.

It took about 7 minutes to heat a blend of olive and canola oils to 275°F on medium heat. I began by frying the lemons. They emerged from the fryer crisp but juicy. These were absolutely wonderful. I think I could have eaten a plate of the lemons all by themselves. When I placed the lemons in the oil, the flour mixture did disperse a bit. This caused the oil to become cloudy, but it didn’t affect the outcome of the lemons or the fish.

The fish fried up into a lightly crisp, nongreasy, flavorful piece of cod. The texture of the fish becomes firm but not rubbery, although the fish does not fry up into a deep, golden brown; it’s not like a British fish fry. Eat some of the lemons and fish together. They are a great combo. (These lemons would also be fabulous on their own served as is or with some powdered sugar for a sweet finish.)

This recipe works perfectly as written. Since I first tested this recipe I’ve made it quite a few more times, and the results have always been amazing.

I did a batch with Wondra flour and another with rice flour (due to being on a gluten-free diet). My husband tried both and felt there was very little difference between them; if anything, he felt the seafood that was coated with the rice flour was even lighter than the seafood coated with Wondra. The color of my seafood wasn’t as golden brown as the photo above. The scallops especially were tremendously moist and juicy. It was far from greasy/oily. We ate it as an antipasto but made a meal out of it. Although it was finger food, our hands weren’t greasy, which I think says something. The reason I DID like using the flour was that it was much more like southern European-style, where there is barely any batter. Living in Wisconsin, where Fish Fry Fridays are common, I’m never able to eat the fish due to the heavy batter, which in my mind takes away from the actual taste of the seafood. This is absolutely not your typical American fried fish. It’s very European, hence I loved it. Even after the fried seafood turned cold, it kept its crispness.

1) I used a deep fryer, which makes it easier to control the temperature of the oil.

2) The temperature of 275°F is perfectly fine for thicker fish and the scallops. I used flounder, cod, walleye, and swai fillets.

3) For the squid, I first tried cooking it at the same temperature as the fish but it came out too rubbery. So for the next batch I brought the temperature to 320°F and the squid was perfect after about 3 minutes.

4) Make sure to fry the fish in batches according to size and thickness, as the thicker pieces will take longer (about 4 minutes) and the thinner will cook faster (the squid took 3 minutes max).

5) Make sure when dredging the squid rings to open them up nicely so that their insides are floured so they won’t stick.