These sweet potato enchiladas, that are filled with healthful ingredients including spinach, black beans, sweet potatoes, and peppers, are smothered in a homemade enchilada sauce. But healthy isn’t the only reason to indulge in them. They’re Tex-Mex deliciousness. And they just happen to be vegan.

Loaded with sweet potato, black beans, and spinach and smothered in a simple yet satisfying enchilada sauce, these vegan enchiladas are definitely not your typical enchiladas although they’re unexpectedly satisfying. And they’re still gonna garner raves from everyone.–Angie Zoobkoff 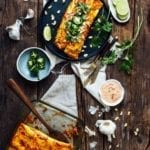 These sweet potato enchiladas, that are filled with healthful ingredients including spinach, black beans, sweet potatoes, and peppers, are smothered in a homemade enchilada sauce. But healthy isn’t the only reason to indulge in them. They’re Tex-Mex deliciousness. And they just happen to be vegan.
Brian Kateman | Pat Crocker
Prep 30 mins
Cook 30 mins
Total 1 hr
Mains
Mexican
4 to 6 servings
1171 kcal
5 from 1 vote
Print Recipe 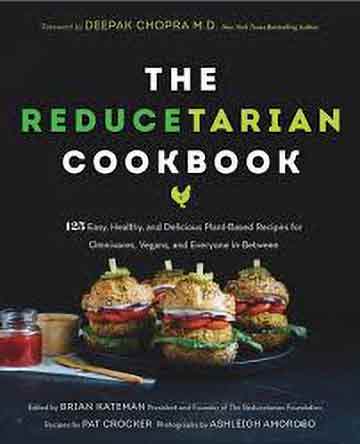 For the enchilada sauce

I am not vegan but these days it’s nice to take a break and eat the rainbow. And this recipe is a delicious way to do so! My kids and I ate these up and they will be a good “Meatless Monday” standby.

If you skip the homemade optional steps and replace them with store-bought enchilada sauce and store-bought salsa, this is a quick weeknight meal as well, which is a must in our busy household!

I used 6-inch corn tortillas because where we live, in Arizona, it is sinful to make enchiladas in flour tortillas! I think the leftover filling will be great as burritos inside of flour tortillas or in a brown rice bowl.

Next time I will top these with a nice white melting cheese such as Jack or Mozzarella since we aren’t vegan. Feta or Cotija would be great as well.

I made the Avocado Dip and took less than 5 minutes. I am not used to the tang of mayo in a guacamole-type dip and would prefer to use sour cream instead of vegannaise next time but for vegans it is a super delicious alternative! It was great as a topping on the enchiladas and my son and I also loved it on chips!

I really wasn’t sure about the mayonnaise, among the other unconventional ingredients in this recipe. But after one bite, we quickly warmed up to the creamy enchiladas. Since we’ve been trying to be more mindful about our diet—in fact one of us has been eating little to no meat lately—we loved that each enchilada was packed with nutritious ingredients.

I had planned to serve the enchiladas on a weeknight, so I made the tomato salsa and enchilada sauce a few days in advance, and the filling the day before, making it possible to serve dinner in less than 30 minutes. They’re actually more like baked burritos, as the tortillas aren’t coated with enchilada sauce before rolling. The enchiladas are generous in size.

As a cheese-loving non-vegan, I was certain that I would miss cheese in these vegan Sweet Potato Enchiladas. I even had some queso fresco standing by, just in case. However, my favorite way to eat these enchiladas was just as they are. A little store-bought guacamole was obviously delicious here too, but the enchiladas were pleasantly spicy, tasty, and very filling all on their own.

Part of this was due to the addition of really good salsa (I used some that my dad makes and cans yearly) and high-quality enchilada sauce (I did not make my own but invested in the pricier kind at the store, which was rewarded in its resulting flavor). Since I used store-bought sauce and guacamole, as well as canned beans, these enchiladas were easy to throw together and satisfying as a healthier version of a food that I already love.

I used flour tortillas but would probably try corn in the future as I typically prefer the texture of corn tortillas in enchiladas.

This was a surprisingly good vegan dish! The flavor of the enchiladas was spectacular. There was a nice hint of sweetness from the potato and raisins and peppers. The level of heat was high and oh so good—the salsa I used was nice and spicy plus I used both serrano and jalapeno.

First off, I doubled the recipe in order to make sure that I would have enough dinner for a couple of nights, so I went all in! I invested a good amount of money on some of the ingredients, including 2 jars of a nice store-bought local salsa and avocado oil ($12).

I typically enjoy sweet potato in anything, so that was a big draw for the recipe. I had some doubts based on the ingredients for the homemade enchilada sauce. I’ve never used vegan mayonnaise for anything, and combining it with the salsa and a few other ingredients produced a pink creamy sauce that looked like something on the Nickelodeon show Double Dare. So I was a bit nervous at one point. I’m so glad I ended up trying the sauce recipe—the mayo gave the enchiladas a nice amount of moisture and fat—I didn’t miss cheese at all. The filling smelled and look great given the Swiss chard I picked up at the farmers market, the different peppers, and the sweet potatoes.

A double recipe of sauce and filling made 14 to 16 enchiladas. When the enchiladas came out of the oven, I was so pleased to see that the sauce had deepened to a rusty orange color and no longer looked like lumpy salad dressing.

I would definitely make this recipe again!