Turkish cigars are a classic middle Eastern mezze that’s essentially feta and halloumi cheese with parsley wrapped in phyllo pastry and fried until crisp and golden on the outside, blissfully melty (but not overly oozy) on the inside. They’re often shaped into triangles although we find these more elongated cigars to be a little easier to juggle with a glass of wine in hand. And we find that no matter what your ethnicity, these will taste like home. And disappear quite quickly.–Renee Schettler 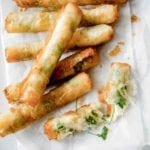 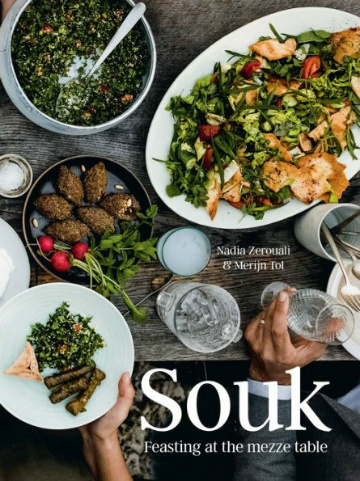 While they take a while to make, these Turkish cigars make a delicious appetizer or lunch with a side salad. If I made the phyllo rolls again, I would add spinach and cracked pepper to the filling.

I was not able to get authentic phyllo dough as instructed so I used the Fillo Factory brand and found it to be not too hard to use if I worked carefully. I kept the stack of dough under plastic wrap and a damp towel. I did the same with the rolls once they were made. I placed them on parchment and covered them.

I loved these rolls! Although if I made them again, I would add more parsley and some spinach.

I made these for a dinner party where we served lamb tagine and a chickpea salad. These were the perfect finger food to get things started. They’re pretty easy to put together and taste absolutely divine. They were a big hit.

I bought standard phyllo dough (about 20 by 16 inches) and by cutting 6 sheets in half I had enough for a full 160-gram block of halloumi. I cut the halloumi into strips first and then cut the requisite sheets of phyllo all at once.

I worked quickly enough that I didn’t have to cover them with a towel. I just stacked up the sheets and rolled them up one at a time. I used a sprig of parsley in each. The only kind of halloumi I was able to find had “Mediterranean” flavors added—oregano, basil, and lemon— and the bright citrus especially added a nice touch.

I used a small saucepan with about 2 cups of oil, cooking 3 at a time. Next time, I’d use my cast-iron skillet and only enough oil to cover the bottom half of the halloumi. The way I did it this time, the rakakat floats cheese side down and I had to manually hold them under in order to get even browning. I think that being able to just flip them over and not having them bob around in blistering hot oil would be infinitely helpful. Finally, I had a few leftover and reheated them the following day; they are better when they are fresh but I do think that they could be made ahead and warmed up in a pinch.

I’ll definitely use this recipe again. The only changes I would make are to chop the parsley rather than using a full sprig. I found that the parsley pulled out with the first bite, like the disappointment of getting all the onion on the first bite of onion ring.

I loved this dish. Great flavors, yummy ingredients, wonderful outcome. I have never heard of Turkish cigars before but do love both halloumi and feta. It’s a heavy starter. It could have so many variations—some honey on the side for a sweet treat. It could be served with sweet chili sauce or great on its own.

I used phyllo dough from the supermarket as we don’t have any Middle Eastern specialty stores here. The recipe involves a different type of rolling than mentioned in all other Turkish cigar recipes. I tried half their way and half the seemingly standard option of triangles. Honestly, I would replace it with:

Remove the phyllo from the package and cover with a clean, damp tea towel. This step is essential, as it dries out at lightning speed! Remove 1 sheet and cut diagonally to form 2 large triangles. Lay the triangle with the straight longest side closest to you. Add 1 strip of halloumi, sprinkle with approximately 8 g feta and 6 parsley sprigs. Fold over 1 time, rolling form the long side towards the tip in front. Fold over the left angle and then the right angle to come to the middle. Now begin rolling again from the filling towards the tip in front. An inch before it is completely rolled, dab a bit of water on the last bit of dough to seal the rakakat. It should resemble a cigar shape. Set aside and repeat.

I used a deep frying pan with 1 kg sunflower oil. I used an extra piece of phyllo to check the temperature. I like this tip of adding a bit of bread in to check heat, its very useful and my preferred method. I fried for 2 mins, attempting to flip once, they are resistant to that! I had to hold some upside down with the wire skimmer to get golden color all over. It would be good if this recipe reminded cooks that oil temp drops once food enters it, so later batches take longer or you have to up your temperature.

These were fantastic little appetizers. Warm and crunchy with soft, salty cheese inside. The feta and halloumi become melted but not gooey. The parsley gave the roll a pop of color, however the flavor didn’t come thru. The cheeses hold their shape and will not ooze out of the phyllo. Use more if you want that flavor. They’re beautiful, easy, delicious, and no dipping sauce needed. Perfect!