Our easy instructions help you make either a single giant skillet cinnamon roll or more modest-size individual rolls. Whichever you want. No judgement here. The hardest part of the recipe, we swear, is waiting for the cinnamon rolls to rest a little after you slather on the cream cheese icing while it gets all melty. 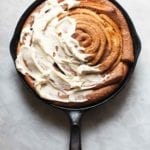 These skillet cinnamon rolls are made with an easy make-ahead dough that’s rolled and baked with cinnamon sugar and slathered with cream cheese icing. Can be made as a giant roll or individual rolls in a cast-iron skillet.
Prep 45 mins
Cook 6 hrs 50 mins
Total 7 hrs 35 mins
Breakfast
American
6 to 8 servings
530 kcal
5 / 9 votes
Print Recipe 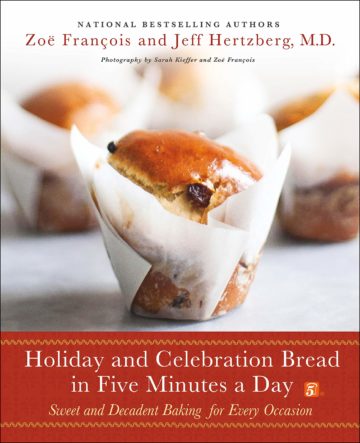 For the brioche dough

For the skillet cinnamon roll(s)

For the cream cheese icing

Skillet Cinnamon Rolls with Any White Bread Dough If you’re seeking something a touch less indulgent (for reasons we won’t question!), you can easily substitute your favorite white bread dough for the brioche. All the same cinnamon loveliness with a little less richness. Skillet Cinnamon Rolls with Five-Spice Powder Lend an air of intrigue to your cinnamon rolls when you swap out Chinese five-spice powder for the cinnamon. The blend of warming spices includes cinnamon, so technically these will still be cinnamon rolls. All the same cinnamon loveliness with a little more robust, more complex, more showstopping warmth from its blend of spices. What To Do With Leftover Bread Dough Another benefit from this recipe, aside from the obvious, is that you’ll end up with more dough than you’ll need for these skillet cinnamon rolls. Lucky you! The superfluous dough can be covered and refrigerated for up to 5 days and used, as cravings arise, for additional batches of these cinnamon roll or it can be shaped and baked into buns or burger rolls or loaves, or it can be transformed into our off-the-charts gooey monkey bread.

First thing I’d like to say about this recipe is YUM! I absolutely loved it and it was really easy to make and full of flavor. When I first saw the instructions and that I’d have to make my own dough (I’m not a baker), it seemed a little daunting, but I was pleasantly surprised as to how easy it was to make. The next time I have some friends over for dinner I’m definitely making this for dessert and when it’s done just putting it in the middle of the table and tell people to dig in!

I loved the flavour of both rolls. The orange zest worked really nicely with both the cinnamon and Chinese five-spice. I can’t wait to make this again.