This red, white, and blue tart–a wicked popular dessert around fourth of July– is made with a graham cracker crust, an easy cheesecake-like filling made with just cream cheese, heavy cream, and sugar, and the eponymous red and blue berries of your choice.

Simple and stunning. That’s what we think of this ridiculously easy tart that’s essentially a cheesecake but with far less fuss. It requires you to do nothing more than press a graham cracker crumb crust into a pan and then stir together a luscious cheesecake-like filling consisting of just cream cheese, cream, and sugar. Then you slip it in the fridge until you need it. Just before serving, add a scattering of summer berries. No water bath. No overnight chilling. Just summertime simplicity.–Renee Schettler Rossi 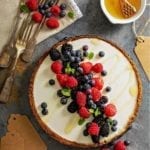 This red, white, and blue tart–a wicked popular dessert around fourth of July– is made with a graham cracker crust, an easy cheesecake-like filling made with just cream cheese, heavy cream, and sugar, and the eponymous red and blue berries of your choice.
Pamela Sheldon Johns
Prep 30 mins
Cook 10 mins
Total 40 mins
Dessert
American
8 servings
5 from 1 vote
Print Recipe 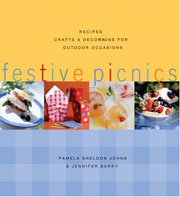 How To Make Tartlets Variation

To make wee individual tartlets, divvy the crumb crust mixture among six 4-inch tartlet pans and bake only for 6 to 8 minutes, until the crust is lightly colored and firm. Proceed as above, divvying the filling and garnishes among the tartlets.

The filling of this red, white, and blue tart is wonderfully light with a marvelous flavor. We preferred it MUCH more than the typical custard filling that fruit tarts have and it was so much easier to make. No cooking, no baking, no fuss, just a quick use of a hand mixer. Makes clean-up much easier, also.

I had to use a 9 1/2″ pie plate, because after putting the crust into the 8 1/2″ and tamping it down, there would not have been enough room for all of the filling.

Due to the increased surface area of the crust, I had to bake the crust for a total of 12 minutes in order for it to set in the center.

As far as arranging the fruit was concerned, I arranged my fruit in concentric circles, which gave the look of a beautiful blooming flower. I even sliced my strawberries so that they looked like hearts, and ended up placing the hearts in such a way that the hearts were standing up amidst the blueberries and the coconut.

All in all, this recipe is a winner.

I’ve made mousse-like, no-bake cheesecakes in the past, but this red, white, and blue cheesecake tart was incredible!! The filling has the dense creaminess and rich mouthfeel of a baked cheesecake without all the effort.

I wanted to make individual tarts and didn’t have small tart pans, so I used my 6-cup jumbo muffin pan with large parchment tulip cup liners. This made it very easy to press the graham cracker crumbs into the bottom and up the sides of each cup using a mini glass prep bowl which was slightly smaller than the muffin cup size.

After baking, while the crusts were cooling, I whipped up the filling, which consisted only of folding freshly whipped cream into the beaten cream cheese and confectioners’ sugar mixture. I then spread the filling into each crust while still in the muffin cups and arranged the berries on top. I chose to hull and slice the strawberries to make them easier to eat. Since I’m not a fan of dried coconut without it being mixed into something else, I omitted that ingredient from the topping list.

There was enough of the beautiful white filling around the edges of the crust to get the red, white and blue effect to make it a perfect July 4th dessert! I placed the tarts, covered, in the refrigerator to chill until I was ready to serve them for dessert.

Serving is very easy, I just picked up the tarts from the pans, removed the parchment liner (the crusts held up beautifully and did not crumble), and placed them on a serving dish with additional berries I had left over. They were so pretty and SO good! The tart toppings can be easily coordinated with any season, making them the perfect choice anytime you are in the mood for a great-tasting cheesecake without all the time and fuss of its heftier, baked cousin. Also, their petite size didn’t make me feel as guilty while I was eating such a decadent tasting dessert!!! Very impressive. I will be making this recipe again!!!

This red, white, and blue tart is a nice, simple recipe just in time for summer barbecues where something cold and fruity hits just the right note. It definitely gets filed under “Keep Me.” Neither I nor one of my testers cares for coconut so I substituted shaved white chocolate. It is the end of strawberry season here; were I to make these again this summer I might substitute raspberries.

We wanted to try out the tartlets version before our 4th of July celebration so we could decide whether or not to make them for the party. Tasty and very simple. We will make these—you can put them together in less than an hour and the cream cheese filling is not too sweet. Use the best quality cream cheese you can find, and of course, the best fruit as well.

We baked the crust for exactly 8 minutes, waited a few minutes and then popped the pans with crusts in the freezer so that we could fill them soon. Whipping the cream took about 30 seconds with an immersion blender.

We arranged the fruit on top of the filling in a variety of flavors with all the fresh fruit we had on hand: blueberries and raspberries; blackberries and strawberries; peaches. e made some tarts with a sprinkle of coconut and some without. For an Independence Day party, the red, white, and blue from blueberries, strawberries, and coconut works perfectly for the visual, although the all-fruit versions were the taster’s favorites.

The cream filling is delicious as-is but it invites orange zest or vanilla, a spoonful or two of lemon curd, or tiny chocolate bits. We did not have tart pans so we used muffin tins. It made 12 mini tartlets.

This is an easy summer dessert that can be put together quite quickly and can showcase any lovely berries that you can find.

I used a 9 1/2″ pan. I found I had enough graham crumb mixture and even enough filling. If you like a good amount of berries on top, you might want to add another 1/2 cup of both strawberries and blueberries. I would make a few tweaks to the recipe by adding 2 teaspoons vanilla to the cream cheese while it’s being beaten. I would also coat the berries a little apricot or marmalade that was warmed on the stove top and strained. I like the berry topping to have a bit of acid. I also think fresh raspberries or currants would be a nice addition.