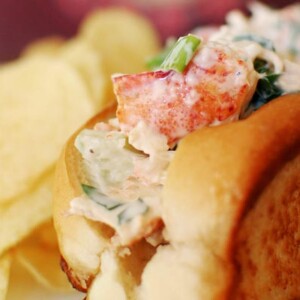 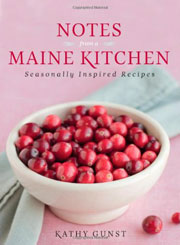 This is absolutely wonderful. The cool, creamy, lightly seasoned lobster salad and the warm, toasted, buttery roll are just a perfect marriage.

I think some tarragon would add a nice freshness to this recipe in place of the chives.

If you’re squeamish about cooking the lobsters, check with your fish market; they may cook them for you. If you’re unsure about what is edible in there, ask if you can get just claws and tails uncooked; they will be more expensive than the whole lobster, but you will end up with only edible meat.

One thing I found is that if you’re not cooking the live lobsters the day you get them, you can hold them overnight by placing them in a large bowl, covered with ice. Chilling them well before cooking them makes the lobsters go into a hibernation state, which helps when you take the bands off the claws.

The results are well worth the time it takes to prepare this recipe.

What excited me about these rolls is the fact that my husband grew up eating lobster rolls, so I was hoping I would impress him with this one. On the other hand, I often prefer shellfish in its simplicity, simply boiled in salt water and chili peppers, so as to enjoy its full flavor. Well, the final consensus from us both was that this is a superb recipe, very easy to make and filled with the true original flavor of lobster yet enhanced with the herbs and citrus juices.

I did not bother buttering the bread on both sides as I thought one side would be enough, and sure enough it was (and this way our hands did not get as dirty). We will be making this simple weeknight recipe often.

This recipe is very simple to put together, especially if you buy already steamed lobster. (I steamed it myself, but this was still very simple to make.)

I like the fact you could get the lobsters steamed at the store, come home, and put the salad together and let it chill and be ready for lunch.

I used 3 four-ounce lobster tails instead of whole lobsters, which gave me a generous cup of meat. I also used a baguette instead of a hot dog roll. While mixing the dressing, I was concerned about the amount of onion (chives and scallion) and thought it would overpower the lobster. The result was surprising. The lemon helped cut the taste of the onion.

I did have a hard time trying to keep it altogether, because when you cut the baguette in half, it doesn’t give you that pocket to hold in the lobster salad like a hot dog roll does. That makes it difficult to eat and keep all the filling inside the bread. We decided to make them open-face sandwiches and they were very filling. But because these are so messy to eat they would not be a good first-date meal!

Perfect excuse to use up leftover lobster. I happend to have 2 lobsters left over and this recipe was a great use. I added red onions and homemade pickles to it for an extra special flavor. I served it on a buttered, toasted, sesame seed hot dog bun. Mmm.