This chicken stewed in garlic and cinnamon, called kota kapama, gets depth of flavor from wine, tomato paste, and Greek cheese. A classic recipe made inexpensively and easily from pantry staples. In other words, perfect cold weather food.

This traditional Greek recipe, known kota kapama, is essentially chicken stewed in garlic and cinnamon and onions, which creates an aroma just as knee-wobblingly enticing as you can imagine. Almost as compelling as the aroma is its rustic taste and the fact that you can toss it together with ease from inexpensive pantry staples. What results is meltingly tender onions and a sauce that boasts a beguilingly smoky sweet sorta thing going on. [Editor’s Note: Well, everything except for Greek cheese, but we have some ideas on what you can substitute for that in the recipe below.] The author, who grew up with this recipe, serves it with rice, orzo, or buttered noodles.–Renee Schettler Rossi

Chicken Stewed in Wine and Cinnamon 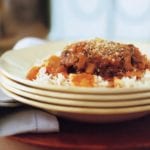 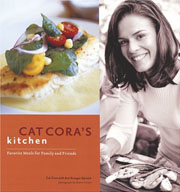 I wasn’t sure what the combination of chicken with tomatoes, cinnamon, wine, and garlic would yield, however, I like all those ingredients independently and figured that they would be good together. Thankfully I was right, and this was a really good dish! It came together very easily and made for a nice and easy weeknight meal. Because of the long cooking time, the chicken gets really tender and practically falls off the bone, The recipe calls for a lot of onion, which makes for a nice, thick sauce. After finishing the chicken, I found myself wondering what I could do with the remaining sauce, which I think would be good on just about anything! I was not able to find the Myzithra cheese, but used grated Romano cheese instead. I served the chicken with white rice and a side salad.

I was a little put off at the thought of cinnamon and chicken, but I thought the flavors in the this dish were delicious—a little smoky and a little sweet. I was also concerned about the amount of onions as I don’t like when they overpower a dish. However, I found the onions to be soft and sweet and a lovely accompaniment to the chicken. I served the dish with lightly buttered egg noodles. I couldn’t find Myzithra cheese so we used shaved Romano instead. I think this dish could have used a little more kick or spice. Perhaps some dried red pepper adding to the cooking liquid would have helped. After an hour, the chicken was cooked with a lovely thick sauce surrounding it. I added a pinch more salt and few more turns of black pepper.

Both my husband and I really enjoyed this one pot chicken dish—I would definitely make this a regular given the ease and taste. The flavor of the sauce had depth from the wine and the onions were meltingly tender. The chicken comes out moist and soaks up the sauce nicely—you can definitely taste the hints of cinnamon. I used some really nice Vietnamese cinnamon. This is not a loud, in-your-face kind of dish, but very tasty, satisfying, and homey. I served it over egg noodles (with extra wine!) and it was a great way to capture all that nice sauce!

I served this recipe to some friends who love to critique what I cook. Mostly their comments are very positive, but they are not afraid to say what they think. We all agreed that this recipe produced a dish that was almost wonderful. Browning the chicken first gave the chicken a crispy skin that stayed above the liquid as the chicken stewed. And the texture of the stewed chicken was wonderfully moist. The combination of the crispy skin and the moist chicken resulted in a wonderful texture. The problem was the sauce. The four onions looked like the dish would result in too many onions, it did not. The number of onions was just right. The problem was that the taste of the cinnamon was almost lost in the sauce, leaving it a bit bland. If I were to make this again, and I will, I am going to throw a couple of cinnamon sticks and a teaspoon of salt into the sauce as it begins to cook. I think that would result in a more pronounced cinnamon flavor which would greatly help the sauce. All of this said, everyone went back for seconds on the sauce, so it was almost there, but just not flavorful enough.