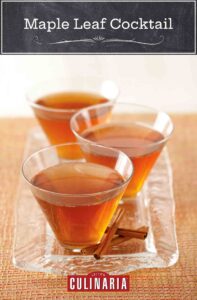 One of our testers dubbed this maple leaf cocktail–a brilliant concoction of bourbon, maple syrup, lemon, and cinnamon–“a toddy for the body.” And we couldn’t agree more.

What’s a maple leaf cocktail? Bourbon. Maple. Lemon. Cinnamon. Come on! What else would you expect from a drink concocted by a food writer whose favorite dessert is a boozy apple crisp imbued with as much spirit as sweetness? Not that we’re complaining, mind you.–Lucy Baker

We could sit back and make you do the math, but instead, we thought we’d be kind and help you keep in mind the following conversions. After all, we understand. It’s difficult enough to keep this type of thing straight when you’re sober, let alone after you’ve already gotten into the bourbon and are a little tipsy… 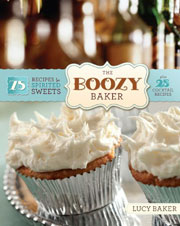 Despite the lack of a respiratory affliction, this maple leaf cocktail, or “toddy for the body,” was just what the doctor ordered! This recipe is, of course, easier than easy once you remember that 1 tablespoon equals 1/2 ounce. I think the maple syrup might color the end result a bit, depending on the quality that you have on hand.

I ended up pouring my test run over crushed ice (you can take the girl out of the South, but you can’t get a Mint Julep out of her mind), and it was even better than it was shaken and poured neat into a cocktail glass. This will find its way into the list of “would you like a drink” offerings around our house, as it’s sweet, spicy, and peppy—just plain grand.

For someone who doesn’t drink much alcohol (that would be me), this maple leaf cocktail was surprisingly delicious. The recipe appeals to me as it contains maple syrup, which I love. The cocktail is nicely balanced with a hint of sweetness but definitely is not overpowering. I used lovely cassia bark, as I ran out of cinnamon quills. Although I served it on crushed ice, it is a warming drink on a cold day. I would definitely make it again.

Weirdly enough, this maple leaf cocktail almost reminds me of iced tea: sweet, sour, and slightly spicy iced tea with a little alcoholic kick. It was an enjoyable cocktail to accompany pungent soft cheese and crackers. I also tried this with crushed ice and unstrained. I prefer it over the crushed ice, actually. This would be a great party cocktail and should be fairly easy to make in larger quantities.