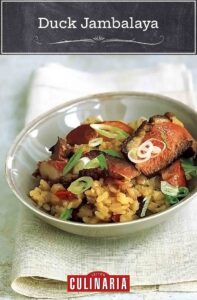 This duck jambalaya is a new take on a classic. Duck breasts are grilled then added to the pot along with rice, ham, onions, and bell peppers. Hot and spicy.

Traditionally, cooks prepared jambalaya in a covered pot, often hanging over a fire. But this duck jambalaya translates well to a grill party with a few modifications. If you don’t care for duck, or find it gaspingly expensive in local stores, substitute boneless, skinless chicken breasts, ignoring the instructions below regarding the duck skin.–Cheryl and Bill Jamison

Andouille is a smoked pork sausage that originated in France. The American version comes from Louisiana and is smokier and spicier. Popular in Cajun and Creole cuisine, andouille can be either fresh or fully cooked.

What’s the difference between gumbo and jambalaya?

Gumbo and jambalaya are classic Louisiana dishes that boast multicultural Creole and Cajun roots. They’re similar up to a point but the finished dish is quite different. The main difference between the two is the role of the rice, which is integral to both. Gumbo is served with rice that is cooked separately, but rice goes into the jambalaya pot as part of the whole recipe.

Why do you need to score duck fat?

One of the best things about cooking duck is the lush flavor that comes from the thick layer of fat, especially covering the breast meat. Slicing through the layer of fat helps it to render faster, bathing the meat and making it moist and full of flavor. Leaving in unscored also means that the duck meat will take longer to cook and the fatty layer won’t crisp up. 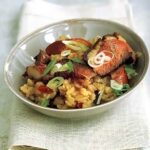 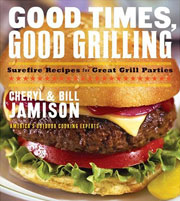 This duck jambalaya was a fun recipe to prepare and eat. The rice-and-vegetable mixture was particularly tasty, especially as enhanced by the taste and texture of the andouille sausage. As mentioned in the method section, caution needs to be taken when grilling duck breasts. Flare-ups do indeed occur. Therefore, trimming away as much duck fat as possible will make for better-cooked breasts. The duck jambalaya turned out quite well and we all enjoyed it.