This New York-style cheesecake is a classic: a graham cracker crust and a filling made from cream cheese, sugar, eggs, and lemon. Dense and rich.

New York-style cheesecake was made popular in the 1920s in Jewish delis around Manhattan. But honestly, what we think of when we taste it is that episode of “Friends” in which Chandler and Rachel steal their neighbor’s mail-order cheesecake twice. Remember that? And how the cheesecake fell on the floor in the hallway of their apartment building and they grabbed forks and fell to their knees and started scooping it up while moaning. Suffice it to say, their search for the perfect New York-style cheesecake recipe ended. Just as ours does with this recipe. It’s that good.–Renee Schettler Rossi 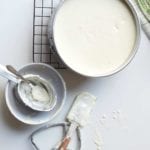 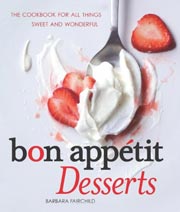 For the New York-style cheesecake filling

The top cracked only the slightest bit, but I think that was because I didn’t have enough water in the skillet holding the cake pan—the water level is very important! I recommend that everyone make this at least once.

This is a cheesecake lover’s ultimate dream come true. The crust is just right—not too thick, but not too thin, either. The filling is rich, plush and creamy, tempting, and commanding you to take bite after bite.

My cheesecake baked in the exact time specified, coming out of the oven with a golden brown top, and a perfect center. There was not a crack to be found in the cheesecake, even after it fully cooled. I used a 12-inch cake pan to set my cheesecake into, filling it half full of water as directed. The cheesecake lovers voted this the best they had ever had. I wouldn’t change a thing in this recipe. It’s quick and easy to put together and it’s delicious just as written!

Make sure your cream cheese is at room temperature and that you have enough water in the roasting pan so it doesn’t run dry while in the oven.

This New York-style cheesecake is sooooo good. Usually when I make a cheesecake with a springform pan, my cheesecake cracks and the crust gets mushy. Not this time. This recipe is foolproof.

Make sure to rotate your pan 180 degrees in the oven, so that the cheesecake bakes evenly. I didn’t do this, and one side of mine was golden, the other not—but both were still divine! The white sugar, cold cubed butter, and graham crackers resulted in a tender and utterly delicious crust. I’d like to have a thicker crust next time, as it was so caramel-y delicious as a foundation for the cheesecake.

For many years, I’ve been thinking about making a cheesecake, but somehow it never happened until now. I bought my first springform pan on the way to the supermarket to get cream cheese and graham crackers. The results were delicious. I was so happy with how the cheesecake looked, and how evenly it settled in while cooling, that I was quite confident when I cracked open the pan at a potluck dinner this evening. Everyone jumped for seconds, devouring the luscious, creamy filling and the crisp graham cracker crust.

I tend to think of cream cheese and graham crackers as I do of peanut butter: they aren’t things that I much enjoy on their own or would tend to keep around my house. But with a recipe like this, when you mix them with some sugar, a little heat, and a few other ingredients, you end up with a simple, classic, memorable dessert. I will come back to this recipe soon.

Well, this is the kind of cheesecake I like. It’s simple and classic, and isn’t bogged down with fussiness. It’s super-rich, dense, and not at all fluffy. It also has the right amount of crust, providing a good base but not competing with the main event. This cheesecake is very easy to make, and I’d call it quick if it didn’t bake for over an hour, require cooling to room temperature and refrigerating!

There was one teensy hiccup, however. My finished cheesecake was a bit undercooked—or maybe that’s softly set?—in the center. That may make people nervous, but I’m the type of person who eats raw cookie dough, so it didn’t really bother me.