Savory bread pudding is an easy way to make guests sigh with content, whether at breakfast, brunch, or dinner. Easy to make in advance, too. 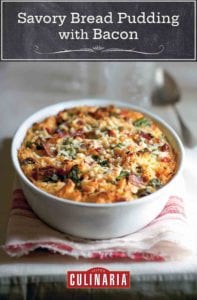 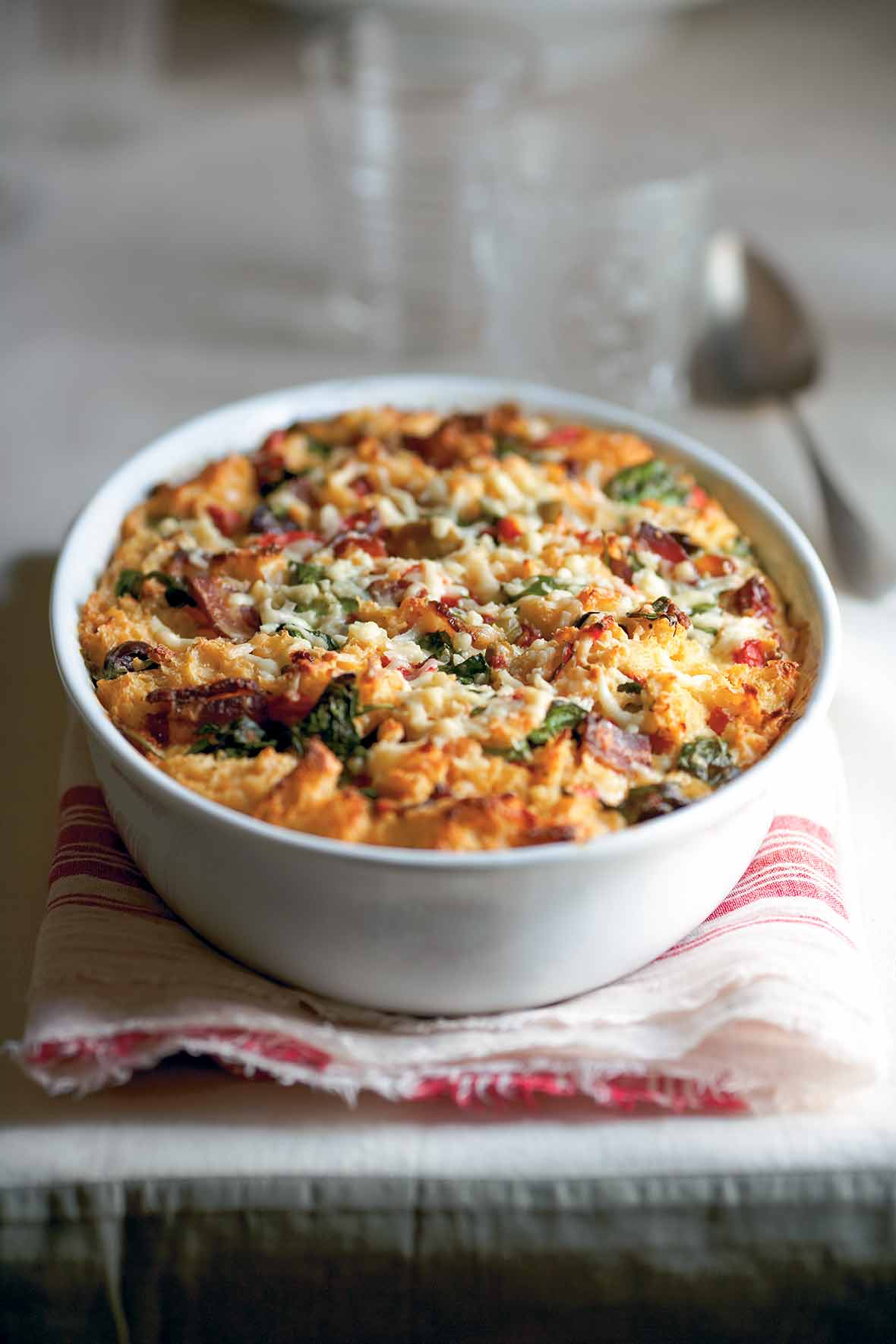 Savory bread pudding with bacon has not just its irresistibleness going for it but its versatility and its make-aheadness. Because not only is it rich and cheesy and gooey but it can easily steal the show at breakfast, brunch, or dinner and (yep, we’re not done yet) you can make it up to a couple days in advance. Originally published January 9, 2007.–Renee Schettler Rossi 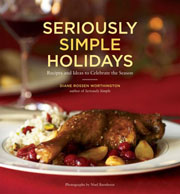 One day before preparing the bread pudding, place the bread cubes on a baking sheet and let stand at room temperature overnight or until the bread is dried out.
The next day, in a large skillet, cook the bacon over medium-high heat, turning as necessary, until evenly brown and crisp, about 5 minutes. Remove to paper towels to drain.
Butter a 9-by-13-inch baking dish. Arrange the bread in the dish. Scatter the bacon, peppers, and spinach leaves evenly over the cubes. Sprinkle with the 2 cups cheese. With a large spoon, evenly distribute the ingredients.
In a large bowl, whisk together, or beat with an electric mixer on medium speed, the eggs, milk, mustard, and salt and pepper to taste until well blended. Ladle the milk mixture over the bread cubes and gently press the bread into the liquid. Sprinkle with the remaining 1/4 cup cheese. Cover with aluminum foil and refrigerate overnight.
The next morning, remove the bread pudding from the refrigerator about 1 hour before baking and preheat the oven to 350°F (175°C). Bake the pudding for 45 to 50 minutes, or until slightly puffed, set, and browned on the top. If the center is still underdone, push the bread down with a wooden spoon to help the bread absorb the liquid. Bake for a few more minutes. Let rest for a few minutes and then cut into squares. Serve slightly warm or at room temperature. [To make the bread pudding in advance, bake it, let it cool, cover loosely, and then keep at room temperature for up to 4 hours. Reheat in a 350°F (175°C) oven for 15 minutes, if desired.]
Print Recipe

This recipe is definitely not just for the holiday season. It would be perfect any time of year, for a weeknight meal or a casual yet elegant brunch. The colors of the dish are indeed pleasing, and the smoky, cheese-rich aroma as it bakes will give anyone in range an instant hunger pang. Planning a couple of days ahead is well worth it, as the actual work of assembling and baking the bread pudding is next to nothing. It's a dish that calls for minimal effort and gives maximum results, so it's ideal for entertaining.

A few notes:First, if you can't find olive ciabatta, don't worry. Substituting another sturdy olive loaf (or a combination of plain ciabatta and olive bread) will work just fine. Second, although the recipe doesn't specify it, you should remove the aluminum foil before baking. And finally, although this dish is meant to be eaten warm or at room temperature, my leftovers in the fridge were still fabulous on day two—even when I was too lazy to reheat and just ate a giant slab of bread pudding cold for breakfast!

Loved it—the flavors—it was fantastic for a fall, Sunday afternoon. I made it for dinner to try something different; I will be making this again. It was nice comfort food with which to curl up in front of the fireplace and watch some movies and have a relaxing and enjoyable afternoon.

An outstanding recipe. When I read the recipe for the first time, I was skeptical about the olive ciabatta, but it just added another subtle layer of wonderful flavor. This is well on the way to becoming a family favorite!

This is an outstanding brunch dish that can also serve well as a light Sunday supper. Tasty, colorful, and simple to make, the flavors were strongly highlighted by the smoked bacon and olives, in particular. The use of ciabatta is also an excellent choice and I found neither puffiness nor much leftover liquid after baking. After first tasting the dish, I thought it might have been worthwhile to have added a finely chopped yellow onion. However, upon further eating, I decided the dish stood very well on its own without any other ingredients.