The secret to this flavorful shrimp risotto is a rich stock made from shrimp shells–plus extra-jumbo shrimp and a lot of old-fashioned stirring.

It was on the tiny artists’ island of Burano, near Venice, that The One and I were served that fateful first course of shrimp risotto. Put simply, it flat-out beguiled us. I set about recreating this achingly fresh dish as soon as I returned home, and many, many pounds of rice and shellfish later, I hit upon a rendition that I believe comes close to its inspiration.

I’ve been making this shrimp risotto recipe for 15 years, and each time I change it a little. This last time, though, I was terribly disappointed by the lack of shrimp flavor. It was the only time I’d used supermarket shrimp instead of shrimp I’d bought from my trusted fishmonger. Coincidence? I think not. The moment I realized that the soul of this dish—the very essence of what I’d experienced in Burano—was so easily compromised, I knew that, sadly, there’s just no way around it. I hated to do it, but I knew I had to buy special ingredients for this recipe. Those pasty hunchbacks of the seafood case—you know, those pathetic things that’ve been frozen and thawed and slashed in price—just wouldn’t cut it.

Still, it took me a while to actually step up and hand over my credit card number. During my initial stage of denial, I went the frugal route and spent a pittance on shrimp base, hoping I could jack up the shrimp flavor in the recipe with a simple fix. But when mixed with water, it made a vile, salty, and nasty broth.

I then tried just about every combination of ingredients and concoctions I could think of in conjunction with supermarket shrimp. Nothing worked.

Finally, bereft of options and wanting to give you, dear reader, the full wallop of flavor I had in Italy, I purchased five pounds of individually quick frozen (IQF) head-on extra-jumbo Gulf shrimp from CajunGrocer.com. And, much to my surprise, it cost only $50 (well, not including shipping). At my local fish market, that would have easily cost more than $100. When the shipment arrived, smelling all clean and oceanic and nothing at all like those supermarket munchkins, I took out what I needed for the risotto and tossed the rest in the freezer. (There’s scampi, gumbo, and potted shrimp in my future.) When cooked, the shrimp were so sweet, so buttery, I almost forgot about making the risotto. Not surprisingly, the heads and shells give the stock that same amazing flavor I’d experienced in Italy and even trump what I paid a small fortune for to my fish guy. And it was cheaper, even after I’d factored in the two-day air charge from FedEx.

And I’ve even done the math for you: 3 pounds head-on extra-jumbo Gulf shrimp equals 1 1/2 pounds headed, peeled and deveined shrimp, which is exactly what you need to make my shrimp risotto.

If, after hearing all this, you still feel it’s against your culinary religion to special order ingredients, I understand. I do. Truly. So scroll down to the variations below the recipe for some creative solutions to get stellar risotto even when circumstances conspire to give you not-so-stellar supermarket shrimp.–David Leite

How To Make Homemade Shrimp Stock

So you want to make your own shrimp stock, but chances are you don’t want to—nor can you afford to—shell pound after pound of shrimp to obtain the necessary mountain of shrimp shells required to make your own homemade stock? We get it. That’s why we [Editor’s Note: And by “we,” we mean at least one of us editors here at Leite’s] make fast friends with the guy at our local seafood market whenever we move to a new ‘hood. After just a trip or two to the counter, we inquire if, perchance, there are any shrimp shells left over from the shelled shrimp sitting there so prettily on ice? Works like a charm and we usually, and gratefully, walk away with a ginormous bag of featherweight shrimp shells at no charge. A word to the wise, though. We always purchase a little something from the seafood counter—some plump sea scallops or a lovely flounder fillet—to express our appreciation. And there may be the occasion gift of, say, apple pie. Just don’t count on this as a last-ditch, eleventh-hour solution, because as is the case with anything in life, timing is everything. Often seafood mongers shell the shrimp in the morning and toss the shells right away. So we call ahead as soon as the store opens and ask if they’d set the shrimp shells aside for us. But we aren’t telling you where. Nope, we’re not sharing. You’ll just have to find your own shrimp shell source. 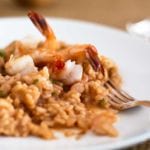 For the shrimp stock

For the shrimp risotto

Supermarket Shrimp Stock You can certainly use shells from supermarket shrimp to make the stock, but you’ll need far more than those from 1 1/2 pounds shrimp to make an intensely flavored stock if you’re not using shrimp heads. As you buy shell-on shrimp and peel them for prep in another recipe, stockpile the shells in the freezer. Keep doing this until you have more than you think you’ll ever possibly use. (Be sure to keep a running tally of how many pounds of shrimp you’ve shelled, whether you do so on the resealable plastic bag or somewhere in your kitchen. Shells from about 5 pounds of shrimp is a good start, although shells from 10ish pounds of shrimp is even better. ) Proceed with the stock recipe above, keeping all other amounts exactly as they are. Don’t increase the amount of water. Quick-Start Shrimp Stock Impatient? Not willing to (forgive me) shell out money to buy Gulf shrimp online? I get it. (I wasn’t, either. At first.) There is a quick-start stock you can make with the shells from 1 1/2 pounds of shrimp by jacking it up with clam juice. Make the stock using only 4 cups water. Once it’s finished, have a taste. Chances are it’ll be somewhat lackluster. Add a combination of water and clam juice until you have 7 cups of stock that has a distinctive shellfish flavor. Don’t salt the resulting risotto. The clam juice is plenty briny.

This is a simple risotto that comes together in the standard way. Note that the risotto is not enriched with huge amounts of butter, and there is no cheese present. This is food purity here. Good ingredients, simple recipe, delicious meal.

What I love about this recipe is that it’s all about the shrimp stock. I wouldn’t dream of using anything but a homemade shrimp stock here, because the stock is the star, and this recipe lets it shine. I’m a big fan of a good homemade stock, and shrimp stock more than any other. There are a number of ways to go about making it, including the directions here. I eat quite a lot of shrimp, which I always buy shell-on and, usually, head-on. If I’m not making stock right away, I stash the shells and heads in my freezer so I always have a large supply when I need some shrimp stock. Also, once made, shrimp stock freezes beautifully, so I always make extra. I freeze some in pints and some in ice cube trays for when I only need a couple tablespoons. (I remove them from the trays once frozen and keep them in a resealable plastic bag). The great thing about shrimp stock is that it comes together much faster than stocks made from poultry, beef, lamb, pork, etc. The formula given here will give you a great stock (I don’t use the tomato paste, though). You can mix the ingredients up a bit depending upon what you have on hand, but don’t overdo the carrot. Always use some onion and celery. A bay leaf is nice, and you can also use a sprig of parsley, chervil, or lovage. Stay away from stronger herbs like rosemary, thyme, or oregano.