David Chang’s magnificent octo vinaigrette is a spin on the original recipe. Made with some strong flavors–like fresh ginger and garlic, chile, rice wine vinegar, light soy sauce, and toasted sesame oil–it can stand up to pungent flavors like seaweed or octopus. Or best of all, fried chicken.

From Kevin Pemoulie, creator of this vinaigrette and one of the world’s finest condiments and food-improvers, comes this sauce that’s so good it makes anything taste better. The “octo vin” is how she’s formally known. I think of it as an interesting flip-flop of a traditional vinaigrette in that the ratio of vinegar to oil is reversed. It’s designed to hold up to the char of the octopus and to dress the seaweed, which, unlike lettuces, requires a very forceful, pungent sauce. I wish my prom date had worn a pungent dress.

If we used this to dress a salad, it would probably be too strong. However, it is really f**king delish with meats: grilled or fried. We served it once with whole fried sole. We’ve served it with grilled hamachi collar. And, obviously, the fried chicken–David Chang and Peter Meehan

Even the most renowned, crazy creative chefs rely not just on chimera but actual cooking techniques when it comes to the execution of their ideas. In his book, chef David Chang reminds us to take your time and work your knife skills when slicing and dicing. “Making small, even pieces of garlic and ginger (not the mush that a garlic press or a ginger grater creates) really make a difference,” he says. “Big bits of raw garlic can have an acrid sting: chunks of ginger will deliver a too-spicy blast can be unpleasantly fibrous.” There you have it. 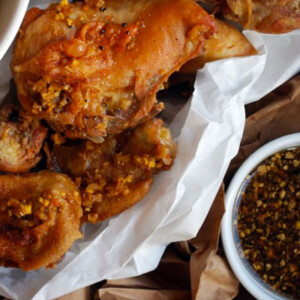 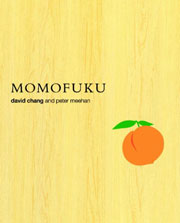 Delicious. Flavorful. Exciting! I have the Momofuku book and enjoy it immensely, and this recipe definitely lives up to the hype. The recipe itself is so simple, yet the flavors taste complex. We served it over gluten-free buckwheat noodles. They were a perfect match. Why do I love it? The combination of fresh garlic, ginger, chile pepper, rice vinegar, usukuchi, grapeseed oil, toasted Asian sesame oil with a touch of sugar and salt and pepper was superb. We slurped it up so quickly that I had to make another batch while we waited for more noodles to boil. We added scallions to it the second time around and LOVED it. It is different from the average vinaigrette, which is another reason I was so drawn to it. You must try it! It would be incredible on octopus.