Ricotta cheesecake from Rome’s Jewish Quarter is a classic Italian classic dessert. It has a touch of lemon, is slightly lighter and more pudding-like than traditional New York cheesecake, and is lovable in its own incredible way.

This tender ricotta cheesecake, sometimes referred to as a pudding (budino di ricotta), started out as a pancake. Food historian Clifford Wright notes that Sicilian Jews took their traditions of making and cooking with ricotta to Rome when they were expelled from Sicily in the fifteenth century and a version of this recipe came with them. You can still find this delicious dessert in Rome’s Jewish quarter in its simplest form—eggs, sugar, homemade ricotta, and cinnamon. In our recipe, we separate the eggs and fold in the beaten whites, which makes the cake even more delicate. [Editor’s Note: This pretty, pudding-like cheesecake took us a little by surprise, being, well, prettier and more puddinglike than we’d expected. This lovely creature is so light and airy, cracks during baking or cooling are sorta inevitable. Look at it this way: They add to the homemade charm of it.]–Melissa Hamilton and Christopher Hirsheimer

What’s the difference between ricotta cheese and cream cheese? 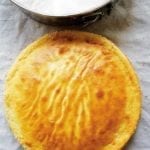 Ricotta cheesecake from Rome’s Jewish Quarter is a classic Italian classic dessert. It has a touch of lemon, is slightly lighter and more pudding-like than traditional New York cheesecake, and is lovable in its own incredible way.
Prep 20 mins
Cook 40 mins
Total 1 hr
Dessert
Jewish
8 slices
229 kcal
4.80 / 5 votes
Print Recipe 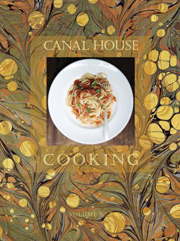 What a delicious and unique version of a cheesecake. This ricotta cheesecake recipe turned out so much better than I expected, and our dinner guests loved it, too. The description of this cheesecake was right on—it was definitely more of a “pudding cake” than anything else. I loved the consistency of the ricotta cheese mixture and the cinnamon and citrus flavors were a delicious combination. (I tasted the batter before baking the cake and was blown away by this flavor combo! It was even better baked!)

It took about 50 minutes to bake. The middle of the cheesecake was still very watery after 40 minutes. I covered the top of the cake with foil for the last 10 minutes of cooking so it wouldn’t get too brown. I used store-bought ricotta cheese, but would like to try it again with homemade to see if that is as tasty!

I love trying new versions of old classics and truly thought this was delicious!

This was the most amazing, pudding-like cheesecake I’ve ever made. I used amaretto in place of the Grand Marnier. The cake was light, and the amaretto worked well with lemon zest. I served it with warm apricot preserves and vanilla ice cream. Decadent. The recipe works as written.

This is a lovely light version of traditional cheesecake or even ricotta cheesecake. I served it after a fairly rich dinner of braised short ribs and no one felt overstuffed!

The recipe works just as written, no surprises, and I was very glad it said the cake would sink as it cools, otherwise I probably would have panicked when it did. It is not the prettiest cake ever, but it was well-received by all who ate it. I served it with a dollop of peach preserves and crème fraîche on the side and that was a nice touch.

I was so excited to make this as we all love cheesecake.

It was very easy to prepare. I don’t think it needs the cinnamon, but that is merely an opinion. I prefer to use vanilla essence, and I am going to try it again. It will be interesting to see how fresh it stays, but it was very delicious yesterday.