The David Leite cocktail recipe, made from bourbon, bacon, maple syrup, port, and Amarena cherries, is also known as The Fatty Daddy. A special libation for a special celebration, we suggest you take it for a spin, too.

What do John D. Rockefeller, John F. Kennedy, Brigitte Bardot, and I have in common–besides enormous sex appeal and outsized egos? We all have something named after us: a building, an airport (et al), a ship, and (drumroll, please) a cocktail, respectively.

To kick off our very first LC get-together, held in Charleston, SC, and hence given the code name “Gritsapalooza,” hosts Clayton and Beth Price had a drink specially made for the occasion–and for me. They christened it the Fatty Daddy Cocktail. I was flattered and honored. After all, ever since my dreams of having my high school renamed David Leite High School for Extraordinarily Talented Children, Just Like Its Namesake never materialized, I thought I’d never be immortalized.

And then along came the Fatty Daddy Cocktail.

Once the drink was flowing freely–Clayton has a heavy hand and big retro coupe Champagne glasses–I asked Beth how they came up with the drink, which draws on bourbon, port, bacon-infused maple syrup (that part always makes me go weak in the knees), and Amarena cherries. Turns out they had a little help from one of their favorite bartenders down in Grand Cayman. But Beth was largely the genius behind it.

“Well, the bacon maple bourbon syrup is the ‘fatty’ part. You’re Portuguese, so port was a no-brainer. And bourbon is the basis for a Manhattan, and you live there,” explained Beth, patient and polite, as always.

“What about the cherries?” I asked.

She rolled her eyes as if I’d asked the most obvious of questions. “Because you’re sweet.” [Editor’s Note: Well played, Beth. Well played.]

So popular was the drink among our crew of staff and recipe testers that many guests had their hands perpetually stuck out for refills, including The One, who rarely strays from wine or Champagne. Having a reputation as a lightweight imbiber, I limited myself to just two Fatty Daddy Cocktails because 1. I needed to not slur my words [Editor’s Note: No comment]; 2. My position as LC’s publisher required that I remain upright for the duration of the cocktail party; and 3. If I let loose, I very likely would’ve been found sitting naked in the Prices’ koi pond out back, singing “My Heart Will Go On” from Titanic.

Even the press wanted to get in on the action. Kathleen Purvis, food writer and food editor of The Charlotte Observer, dug into her purse for a pad and pen as she announced to The One that she was going to find out the recipe and write all about it in her paper. With characteristic aplomb, he turned to her and said, “Ooooooooh, no you don’t. Not until David writes about it first.” Purvis, you have my blessing. Write away.

And now you can drink away. The Fatty Daddy is fast becoming la boisson de la maison chez nous. Here’s hoping it does at you’res house, two! (Damn it, I’ve got to stop tinking these while typing. Thr keys jeep noving.)

Adapted from | Ortanique at Camana Bay

The inspiration for the Fatty Daddy was the classic Manhattan cocktail, with some minor modifications. Carlos Alvarez, the bartender at Ortanique at Camana Bay in Grand Cayman and the genius who created this little number, says, “I’ve always loved the deep ruby color of the Manhattan, and in the right glass, it makes for a sexy cocktail.” Hence the retro coupe. As for the Amarena cherries, they’re the current darling of bartenders everywhere. Understandably so. The Amarena is a sour Italian cherry, typically found bottled in a sweet syrup. Don’t you even dare think of substituting maraschino cherries. (Do you hear me?)

As for the inspiration behind the bacon-and-bourbon-infused maple syrup (is it just me or did your knees go wobbly, too, upon reading that?), that comes from Ortanique’s brunch menu. Alvarez says you could scale down the amount that you make, but really, why would you want to do such a thing when the extra syrup is sooo lovely drizzled over pancakes, waffles, French toast, corn bread, and, well, I can go on…–Carlos Alvarez

One taste of Amarena cherries—sweetly sour, darkly colored, intensely flavored Amarena cherries—and we think you’ll be feeling amorous for them, too. Especially when they’re perched atop a retro Champagne coupe, which, according to the editors of Town & Country, has been “spotted recently everywhere, from sovereign luncheon toasts in Prague to fashion events in New York.” Their conclusion? “The coupe is enjoying a comeback.” 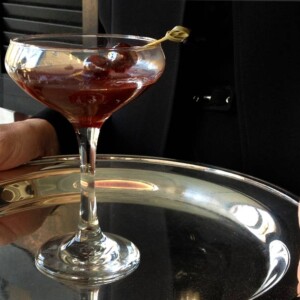 For the Bacon Maple Bourbon Syrup

For the Fatty Daddy Cocktail

W-a-y too easy to drink!

I’m not sure which I loved more—the sublime cocktail with the Amarena cherry teaser or the lovely bits of maple-soaked bacon that I saved and strewed over pancakes.