There’s nothing “plain” about vanilla —particularly when it is the primary flavor in a thick, smooth frappé.

When we were young and foolish, we scorned anything vanilla, being drawn instead to the sexier, more alluring chocolate. Happily, we have come to appreciate that there is nothing “plain” about this aromatic spice—particularly when it is the primary flavor in a thick, smooth frappé.–Andy Husbands, Chris Hart, and Andrea Pyenson

A word on the original title of this recipe, which was actually “frappé” and not “milkshake.” We changed it because, quite frankly, frappé can create a little confusion, seeing as depending on whom one asks, the term means any of varying things, from the Greek iced coffee drink that was a precursor to the Frappucino to a partly frozen fruit slushy of sorts. That said, the sorta frappé we’re pretty certain the authors intended is, simply enough, how New Englanders refer to a milkshake.

Now that we’ve established that, it’s story time. When one of us LCers was really quite little—uh, save for her bulging belly—her mom would, on rare occasion, make her a vanilla milkshake. This was no ordinary milkshake. It wasn’t as cloyingly sweet or as chemically tasting as the ones our little LCer ordered from fast-food joints and refused to finish. Nor was it as straw-stoppingly thick as the milkshakes she slurped at diner counters. It was, quite simply, cold and creamy and slushy and vanilla-y and satiating in the most intensely aromatic way. Her mom never measured the ingredients, yet the precise proportions were always perfect—except when our LCer, later in life, tried to create it on her own. Decades passed. Sigh. And then she tried this recipe. Call it a frappé, call it a milkshake, call it what you will. She calls it perfect. 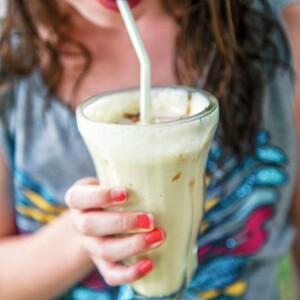 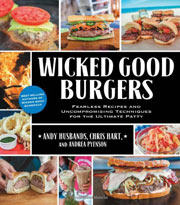 Make It A Wicked Milkshake

Add 1 ounce—or, ahem, an even more generous shot—your preferred single-malt Scotch along with the vanilla extract. [Editor’s Note: We think bourbon may also do the trick quite nicely.]

Yes, a frappé—or a milkshake, as we call it here in flyover country—is never a bad thing. And I have to agree with the authors, there’s nothing plain about a vanilla frappé, so please, please, please use the very best vanilla ice cream and vanilla extract here so you, too, can experience the moody, floral headiness. This milkshake is delicious in its simplicity and complexity all at the same time. I do like the mention in the directions about starting on the slowest speed and accelerating, which is handy for blenders, too. I think the resulting frappé is thicker and creamier when made that way.

This was a fabulously intense vanilla frappe. I just loved the taste of this drink. It’s a grown up milkshake I mean, who doesn’t love milkshakes. I actually made this twice—once with the ingredients specified and once it got a little crazy up here and we added a hint of cherry jam. It’s an absolutely wonderful drink. Works really well in a magic bullet if you don’t have a blender. (I have both so I tried it both ways.)

What can I say about this recipe? It’s fast, simple, and delicious. How thick it’ll be depends on how frozen your ice cream and how cold your milk. In order to keep them both as cold as possible, have the vanilla extract and vanilla bean “caviar” ready before you put anything in your blender. Then blend it up and enjoy. I found this very reminiscent of the ice cream sodas my dad used to make when we were growing up.

A very delicious and refreshing treat that’s really easy to make with a blender. It was ready in just 45 seconds and turned out thick and creamy with significant vanilla flavor. With vanilla beans being fairly pricey, a more economical version could be made with vanilla bean paste—1 teaspoon of paste would be the correct substitution for both the vanilla bean and the vanilla extract. My taster added an ounce of single-malt Scotch to his glass and he liked it very much. (I didn’t because Scotch isn’t my thing.) While I didn’t test the recipe “wickedly,” I can certainly imagine that it’d be an excellent dessert drink for the over-21 crowd.

This is a quick and easy recipe for a vanilla milkshake that the kids can do on their own. I did use vanilla paste (vanilla with vanilla bean) instead of scraping a vanilla bean. The grandchildren made the second frappé and used more vanilla. It was much better.

Frappé, milkshake—either way, it’s vanilla ice cream and milk. Not much to it. Hardly a recipe at all, actually. But that’s just a quibble when the result is such deliciousness. I’m admittedly, shall we say, rather fond of tastes, I do tend to overlook it from time to time and often use it to enhance other flavors rather than rely on it as the star of a dish. I was quite happy to be reminded of its singular virtue—and this recipe lets that shine. I had some excellent vanilla bean ice cream so I skipped the additional bean seed scraping. Sadly, no Scotch in the house, so we made do with the kiddie version. No one complained—well, only about the brain freeze. (Some folks are such milkshake amateurs.)

This is a lovely milkshake for grown-ups. It was simple, straightforward, and smooth. A quick note at the start for other beginner cooks out there about how to best extract the vanilla from the pod might be helpful. I placed mine flat on the cutting board, held the hooked end like a little handle, inserted the paring knife, and made a single cut down the length of the pod. Then I used the back (as in, the dull side) of the knife to slowly scrape out the seeds. I used a Mexican vanilla bean, although I imagine the Papua New Guinea ones would do just fine. I doubled the recipe and the proportions were still good, although in the end I found myself wanting more vanilla flavor and would increase the extract amount just slightly.

I typically choose chocolate over vanilla, but I could drink a lot of these and never miss the chocolate. These are creamy, silken, smooth, and filled with vanilla flavor. The aroma of vanilla hit me before I even took a sip. I blended mine in my Vitamix in a snap. Quick and easy.

One of my sons described this as drinking a cold vanilla cloud, and I’d have to agree with him. It took seconds to make and the vanilla perfume was delightful. I used vanilla paste instead of vanilla bean since it’s what I had on hand. We’ll be enjoying this a lot this summer.

How much easier does it get than vanilla ice cream, milk, a vanilla bean, and a blender? Despite the simplicity of this recipe, the results were phenomenal. I think my husband’s reaction says it all. When I told him I was making milkshakes, he asked if I was serious, considering it was snowing. When he tasted the results, though, he said I could keep the recipe around. I guess simple recipes are sometimes the most enjoyable, especially when the result is one of the creamiest, most vanilla-flavored milkshakes I’ve ever had. I used an immersion blender and blended the ingredients for a minute and a half. The result was a creamy, thick (but not too thick) frappé. I also tried the wicked version, but with bourbon since we were out of Scotch. Though the result was tasty, I’d stick with the regular version. No need to spice up this recipe.

I decided to make this vanilla milkshake vegan by using So Delicious coconut vanilla-flavored milk and ice cream. I make regular vanilla ice cream milkshakes all the time, but really enjoyed this recipe with coconut milk. It tasted lighter, as if I’d used nonfat milk. As for the recipe itself, it’s delicious, quick to prepare, and goes down easy! I like the use of vanilla extract AND vanilla bean, as you definitely get that natural strong vanilla flavor with this dessert (or afternoon pick-me-up, in my case). I’d easily make this again with almond, coconut, or cow’s milk.”