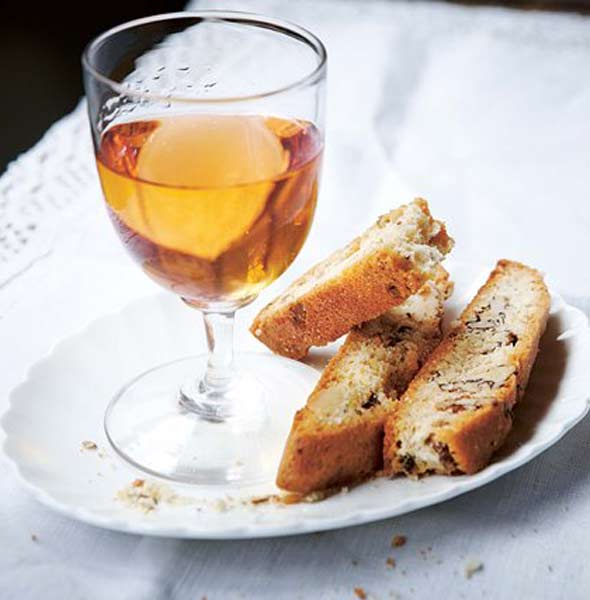 Vin santo is Italian for “sainted wine.” It has its origins in the Catholic church, where it was once given at mass. It’s made mostly in Tuscany from indigenous Trebbiano and Malvasia grapes and is invariably very sweet. It’s occasionally served at the end of a meal as a digestive, but much more commonly offered with biscotti so that you can dunk your sweet biscuits in the wine. I imagine that a good part of this little dessert’s appeal is the dunking ritual involved—and the religious undertones of receiving such a naughty Eucharist.–Russell Norman

LC Biscotti By Any Other Name Note

Everyone knows what biscotti are. But not everyone is aware of the fact that biscotti also go by another name, cantuccini, which translates quite aptly as “coffee bread.” Makes sense, given that biscotti are commonly dunked in something caffeinated to soften them slightly. While we find this ritual to be quite civilized, we actually vastly prefer dunking twice-baked cookies in something inebriating, as this recipe commands. See, these biscotti are a touch spare in terms of sweetness, but that’s only because they’re intended to be dunked in something not just boozy but something slightly sweet, such as the traditional vin santo or a tawny port. How do you say “adults only” in Italian? 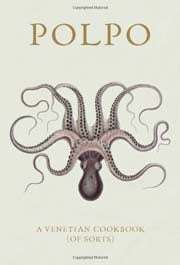 In a large bowl with a wooden spoon, beat together the egg whites, whole eggs, sugar, and all the seeds—vanilla, sesame, and fennel. Make sure everything is nicely combined. Slowly add the flour, baking powder, and oil and continue to combine with your spoon. Add the chopped nuts and mix thoroughly. Cover and place in the fridge overnight to stiffen.
The next day, preheat the oven to 400ºF (200°C). Oil a baking sheet and line it with parchment paper.
Divide the biscotti dough in half and situate each portion on the parchment in a mound similar to a long, squat loaf of bread in a rectangle approximately 12 by 6 by 1 1/2 to 2 inches. Bake for 30 minutes.
Remove the baking sheet from the oven and let it rest until it’s cool enough to handle. Meanwhile, turn the oven down to 275ºF (140°C).
When the big biscotti loaves are cool enough to touch, slice each loaf into 1/3-inch-thick slices. Lay the slices flat on a wire rack and return to the oven for 15 to 20 minutes, or until the biscuits are completely dried out. (The biscotti will last for weeks if stored in an airtight container.)
To serve, place 2 biscotti alongside a chilled glass of Vin Santo.
Print Recipe

With a full pound of nuts in this recipe, it’s no surprise that their flavor is so prominent. I used 5 1/3 ounces of each of the nuts called for, and they went very well with the subtle flavors of the fennel and vanilla beans. I noted that the recipe called for medium eggs, which I’ve never seen in this area, and I found an online conversion so I could use a proportional amount of large eggs. When I made the recipe one week later, however, I completely forgot to do the conversion. Oops. Despite the fact that I had too much egg in my mixture, I thought the biscotti came out fairly well, if a little crumbly. If I were to use that much egg again, I’d bake the loaves of dough a little longer and let them cool off a little more before slicing. The edges of my two loaves seemed to slice fine. It was the middle portion of each loaf, which was a little moister, that had a tendency to crumble when I sliced it. Some biscotti are very hard to eat without a beverage—they’re just too crunchy. That’s not the case with these, which have a bit of a softer crunch and are enjoyable with or without something to dunk them in.

I was unable to find Italian 00 flour in my local markets. But after checking on the Internet to find out what made this 00 flour unique, I determined that our favorite Italian restaurant used what sounded like the same thing for its pizza dough and the owner was willing to sell me some. I did use the wooden spoon as directed; I don’t think my KitchenAid would’ve been up to mixing this really dense dough. My husband did most of the mixing. (Did anyone use a mechanical mixer?) The dough came together well. However, after its first baking and cooling, it was too crumbly to cut thinner than 1/2 inch thick. Once it was baked a second time, it held together much better. We tasted it without dipping (we were way too impatient at 10 a.m. to wait for wine dipping) and enjoyed it but thought it lacked sweetness. After dinner tonight we used a tawny port for dipping and the sweetness and softening resulted in the experience that was described in the recipe. We loved it!