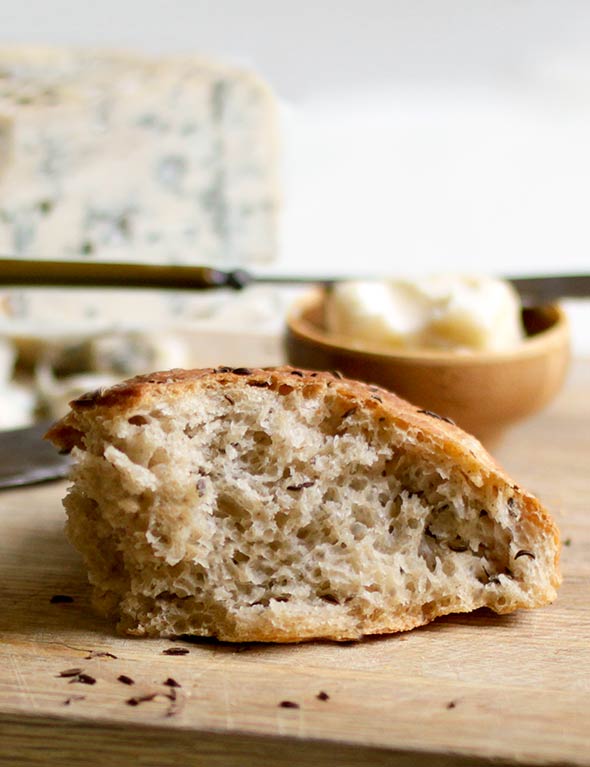 Alas, bread has been less forgiving of me than even my high school girlfriend. During the last few sun-dappled months of senior year, she came to realize I was genetically predisposed to want to go to our prom with her brother rather than with her. Understandably steamed, she gave me an astonishingly icy shoulder for weeks. She softened eventually, in no short thanks to my inimitable charm and style tips, and we remained friends. But my relationship with bread? Forgive the pun, but it hasn’t been so cut and dried. From the very beginning of my cooking days, I’ve been inexplicably drawn to desserts and attracted to savories. On the other hand, baking creations of the yeasted kind terrified me. Then came Jim Lahey’s miraculous no-knead bread recipe and its breathless promise of perfect boules, which swept the Internet and spawned two books. I was extraordinarily curious. I bought a copy, pulled out my Le Creuset, and baked. And baked some more—yet my boules look more like Middle Eastern flatbreads. It felt as if bread had a vendetta against me, as if it was punishing me for my dalliances with puff pastry, cakes, and cookies the size of coffee saucers.

A saner and far less hungry person than I might have looked upon this as a sign from on high that perhaps my belly and my ass aren’t built for simple carbohydrates. But the idea of pulling plump boules and tangy levain from the oven persisted. One particular fantasy that has played out in my imagination since 1995, when I began baking, is pain d’epi, the classic French wheat-stalk-shaped baguette. Its perky left-right tilts always remind me of a line of Busby Berkeley chorines (below) playing peekaboo with dusty miters on their heads.

I desperately wanted to be un Français and walk about New York with a homemade pain d’epi wrapped in brown paper tucked pretentiously beneath my arm. But baguette-making techniques simply left me cold, so I d settled for making crêpes, coq au vin, and tarte tatin to satisfy my Francophilia.

Then Christine Chronis entered my life.

For years, my dear friend Christine has prattled on in near zealot-like style about Zöe François’s and Jeff Hertzberg’s book Artisan Bread in Five Minutes a Day. Christine has long boasted that she’s converted dazed and confused non-bread-bakers, including, among others, her accordion teacher, her vegan daughter and her vegan boyfriend, a Canadian acquaintance, several agnostics, and a younger, handsomer, and more talented man who is now in my crosshairs as a rival for Christine’s bounteous affections. Little did Christine know that for this voraciously carnivorous, tone-deaf, lapsed Catholic with competition issues, this was hardly a ringing endorsement.

Christine has a summer home on Mount Desert Island, and in 2011 she invited The One and me to visit for the first time. She was more than aware of my aforementioned misadventures with le pain and apparently felt it was her duty to disabuse me of my notions. Unbeknownst to us, she timed—to the very second—our lunch of a vegetable torte and tuna-and-tomato pasta with the carrying aloft of a warm loaf of homemade deli rye bread straight from oven to table. Then she watched, with barely concealed satisfaction, as I polished off nearly the entire loaf.

And that’s when la propagande du pain began in earnest. “David Leite, if there’s one thing you’re going to learn before you leave this island, it’s how to make bread,” she chided. I smiled politely as I licked my index finger and picked up errant rye seeds dotting the table. Our friendship was new and I was still pretending to be well mannered. It’s a leap of faith, my being well mannered, I realize that, but it’s true.

Throughout our stay, Christine badgered me relentlessly to join her at the kitchen counter. And each time, I found something far more important to do, such as hunt down that schizy squirrel in her attic, clean out the trunk of our car, even feign sleeping. But what finally did me in was my penchant for plastic organizing containers, especially those of the Rubbermaid sort. Christine waggled a six-quart bucket with a margarine yellow snap-on lid at me and I was a goner. (Little did she know, all she had to do was throw in a bright red pencil box with adjustable dividers and I would’ve been her male concubine for life.)

“This,” she said, pointing with her cigaretted hand to the bucket dangling in front of her, “is where you’ll make the best bread of your life.”

Bereft of excuses and on the receiving end of the Death Ray Look from The One, I reluctantly shuffled over to Christine’s KitchenAid and watched as she scooped in some flour, sprinkled in the yeast and salt, and splashed in water. Several minutes of mixing later, she scraped a ragged dough into the plastic bucket and covered it. That was it. It was all so fast, so intense, so thrilling, I nearly craved a cigarette myself. She planted a wrist on her hip—her hands were webbed with sticky wet dough—and a you-can’t-get-out-of-this-one smirk spread across her face. “Now, you try to tell me you can’t do that!”

I suddenly thought of my Instagram feed, which had all manner of elaborate tarts, pies, grills, and roasts I’ve made. “I’m sure you’re so fast because you’ve been doing it for years,” I said, attempting a compliment. She threw her duck hands up in the air in exasperation. I looked at the ceiling for globs of sticky dough. “It’s called Artisan Bread in FIVE MINUTES A DAY for a reason..!” she huffed, as if I was two sandwiches short of a picnic.

That’s when I knew I’d lost. Thanks to a lifetime of run-ins with Mama Leite, I long ago realized that when an immovable object (namely, me) meets that astoundingly rare and elusive creature who is an immovable object more immovable than I (note, this is almost always a female), it’s best for my manly bits and bobs to just give in. So there in the middle of Christine’s kitchen, with its view of Bass Harbor, I accepted that there was nothing left to do but be led down that carbohydrate path to hell called the big-and-tall-men’s department at Sears by this fiercely passionate, intelligent, formidable woman.

Throughout the week, we made all sorts of loaves together, and they were, indeed, as advertised: fast and artisanal. And with every bite into each warm loaf, I felt myself buckle—it was that good. On our last day, Christine handed me my very own Rubbermaid bucket. Inside was a new copy of the book, plus several sheets of notes, tips, and errata for making all her favorite breads. For most people, this would have been the perfect dénouement to the tale—a friend’s persistence and love turning recalcitrant me into a bread-making machine.

Remember, though, I’m the grand and illustrious immovable object. In that bucket is pretty much where the bread-baking book sat for two years. (Yes, I’m aware that I’m glacially slow to do something someone asks me to do. And, yes, I’m even more aware that there is a psych ward’s worth of control issues raging here. But at the age of 53 I believe I’ve earned the right to say, “I really don’t give a rat’s ass.”)

What did get me started baking bread was our trip to MDI to see Christine this past August, in which she simply refused to hound me. (Yes, now you know my secret: If you ever want me to do anything for you, ask and never bring it up again. Let me think it’s my idea, and I’m a slobbering puppy.) And into a bread-making machine I have turned. 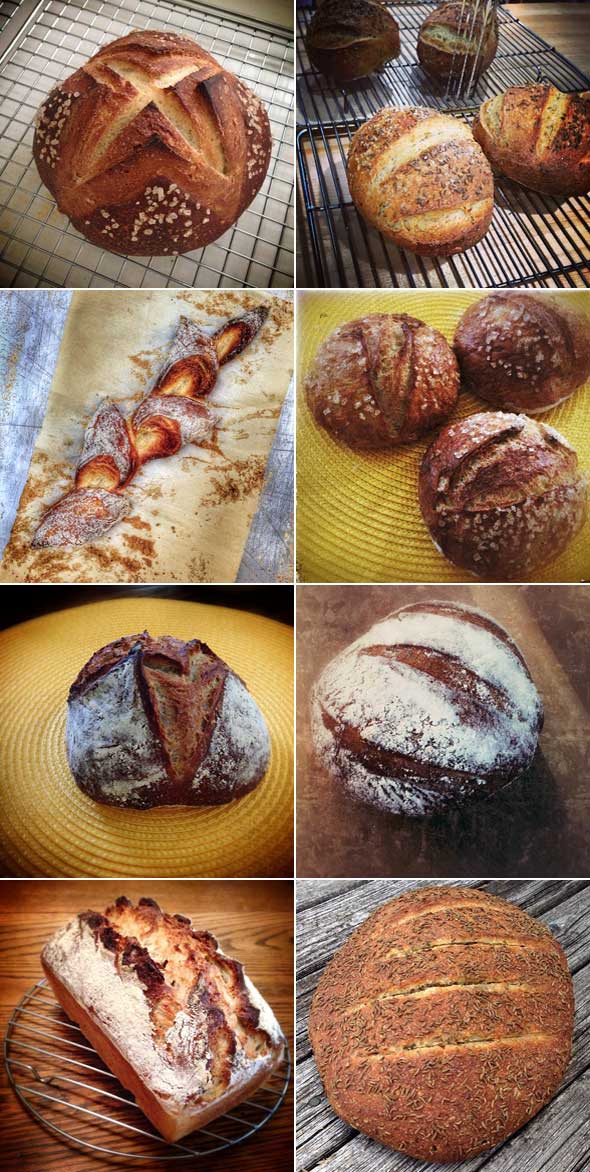 Since August, I’ve made deli rye (check out that beauteous photo at the top of this page) and (above, starting from the left) white boule, seeded white, my longed-for pain d’epi, pretzel rolls, whole wheat, more whole wheat, sandwich loaf, and sourdough rye. 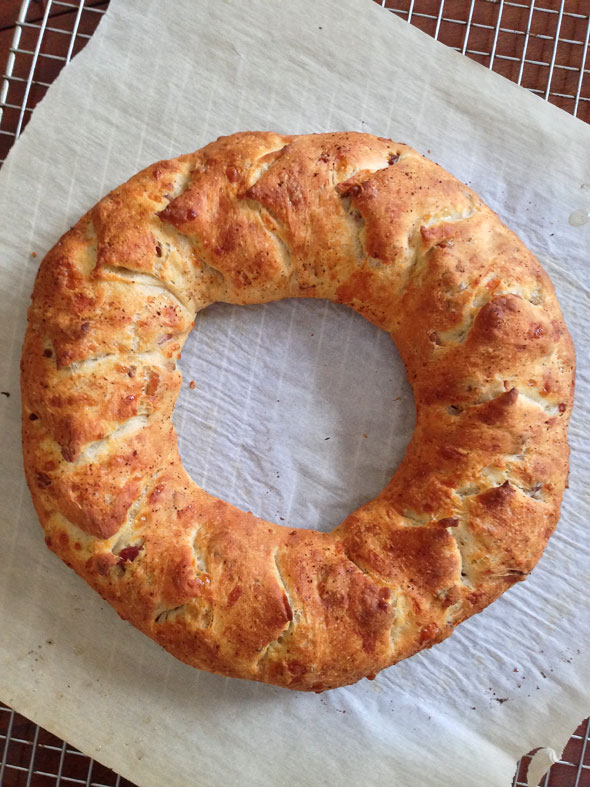 My latest and greatest is my Bacon, Cheese, and Black Pepper Couronne (above). And these are just the loaves I’ve photographed. Add to them the warm bread I’ve sent home with my assistant, Annie; given to my mail carrier; off-loaded onto unsuspecting guests; turned into bread pudding and croutons; and, when I’ve simply had enough, whizzed in the food processor into bird food.

Yes, I am now one of Christine’s rank and file. An acolyte. I guess you could say I’ve had an ovenside conversion, with all the attendant folderol befitting a convert of the first order. I’ve finally cast aside my childish fears and have come to see that bread is the one true way to enlightenment. I may have even had visions of a luminescent Christine clutching an armful of baguettes while standing in a cloud of softly risen dough. But then again, that may have been a carb-fueled insulin stupor brought on by too many slices of homemade sourdough toast.