Medicinal cocktails, like this restorative honey healer, have been around for a long time but fell out of favor when pharmaceuticals hit the big time. However, we think libations like this deserve a comeback–the kinds that taste fantastic as they work their magic.

In Germany, certain herb-based liqueurs are produced with enzyme-rich honey from the Yucatán Peninsula in Mexico to offset the liqueurs’ acerbic bitters. Raw local honey has been said to alleviate the symptoms of seasonal allergies when consumed regularly, and may be good for digestive ailments like colitis. In Ayurvedic medicine, too, honey is highly valued—it’s reputed to be one of the most powerful substances for promoting good health in general. And honey can sweeten the spirit as well as the body: Suspending it in alcohol and combining it with black or herbal tea and plenty of ice makes it a highly refreshing mood enhancer.–Warren Bobrow

This honey healer recipe is intended to be sipped cold, though in the true spirit of cold and flu season, we also sampled it warm instead of on ice—sorta like a hot toddy—and we gotta admit, we liked it just as much. Sorta like a belly rub but from the inside. It’s a potent concoction, though, so don’t operate any heavy machinery after consuming. And by “heavy,” we mean anything heavier than a remote control. 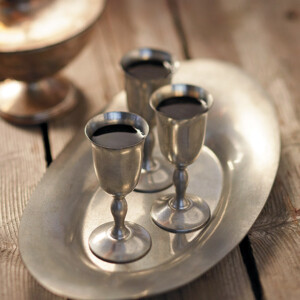 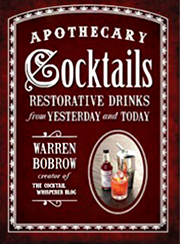 If you’re having this honey healer, do not plan on going anywhere, as there is a copious amount of alcohol involved. I was a little confused when reading the recipe as to whether or not it was meant as a medicinal drink or something to be enjoyed. In a typical German household, bitters are for medicinal use. I used an Irish Breakfast tea and allowed it to brew for 5 or 6 minutes, as I like a good strong tea. I also used a nice local honey and divided the drink among 3 glasses instead of 2 so all of us could taste it. The tea and honey only took a few minutes to cool to room temperature so we could proceed, and then it’s just measuring the liquors and assembling the drink. My husband loved it, finding it tasty and refreshing. My daughter said it was like drinking Buckley’s followed by a big punch from the alcohol. The following morning she noted that she’d slept deeply, and her sore throat was gone. As for me, I’m still on the fence. It’s not bad in its cold state over crushed ice, but I found the alcohol too strong for me and overall the drink to be sweet. Curious how it would be warm, I put the last half of my drink in a mug and heated it up. I found it much more palatable that way—closer to a hot toddy. I also experienced a deep sleep that night, and my cold was markedly better the next morning. If you are a little under the weather or just wanting to try something different, this might just be the drink for you.

Yes! This honey healer recipe is a lovely tipple in the cold season, though it’s entirely too easy to drink so we divvied it up among a group of 5. Even the most skeptical folks agreed that the Jägermeister was a pleasant ingredient, despite the fact that they would never choose to drink it alone. This was very pleasant served over ice in Gibraltars (a 4.5-ounce glass used for cortados or espresso). What improved it greatly (50 to 100 times better, in the words of my very cold-stricken spouse and my best friend) was good-quality honey. Another taster said that while really wonderful honey (if available) can make a difference, really good rum makes more impact. Ideally, I would have made this with Lamb’s or Woods rum, which is almost impossible to source in the U.S., so a small-batch Black Barrel Mount Gay Barbados Rum did very nicely (86 proof). While there was some skepticism of a toddy that was not served warm, this mixture worked. A lovely drink, but absolutely too large a quantity for 2 people. We served two rounds to five people (round two offered a wedge of lime). We used PG Tips tea. With lime, this recipe is a 10!