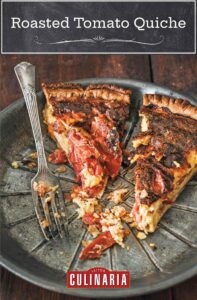 A tomato quiche fairly overflowing with cheese and basil? Sounds like exactly the solution we’re seeking for our glut of late-summer tomatoes.

This roasted tomato quiche recipe is going to blow any prior assumptions or, dare we say, negative connotations you may have been harboring about quiche. As the author says, “I think folks are so scarred from cold, rubbery quiches sitting in glass cases in overpriced gourmet marketplaces that a tiny warning bell goes off in their minds if I even mention it.” Nods. We understand. But we think this late-summer recipe, loaded with fresh tomatoes, basil, and cheese and roasted until its fairly oozing awesomeness, will do great things for quiche’s name in your household. Just do yourself a favor and only make this with beauteous tomatoes straight from your garden or the farmers market. None of those insipid January hothouse tomatoes, please. And then bear in mind that this soulful and satiating quiche goes perfectly with chilled wine at dinner. Or with even more wine at brunch.–Renee Schettler

WHY IS MY QUICHE WATERY?

There’s nothing more deflating than a quiche that has a watery filling or a soggy crust. A runny filling is one thing–generally, that just means that it’s been undercooked and can be fixed by a little more time in the oven. A watery filling happens when your quiche is set but weeps a watery liquid. Here are the top reasons that can happen. 1. You over baked it. That sounds counterintuitive, we know, but when you overcook eggs, their proteins begin setting too hard and forcing out water. 2. You used thin cream (or thin milk). This recipe calls for heavy cream and there’s a reason for that, beyond just the sheer deliciousness of it. Thin cream has far more water, and less fat, than the thick stuff and it doesn’t have anyplace to go…except all over your plate. You can substitute milk for cream but remember to use one with lots of fat. 3. You used the top or bottom rack in the oven. Quiche needs to be cooked evenly from the top and bottom to avoid getting soggy. Make sure that you’re using the middle rack and cooking for at least 45 minutes. 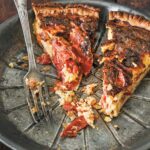 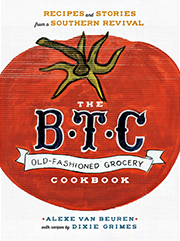 This roasted tomato quiche tasted great. Tomatoes are just coming into season in a big way here, and it's great to have this recipe because it seems so adaptable. Cooking the tomatoes first prevents the water from the tomatoes leaking into the quiche as it cooks. There's so much cheese—and a couple different types of cheese—that this recipe can't help but be great. I opted for fresh basil and used closer to 1 teaspoon to cover all the tomato slices. I didn't use oregano.

It took about 2 fist-size, not gigantic, tomatoes to make 11 slices. I made my own whole-wheat crust because I thought it might go nicely with the tomatoes. It was great, and perfect with the savory nature of this dish. Would I make this again? Definitely. I would probably add basil directly to the quiche, as well. I would likely use the oregano and maybe vary the cheeses. This is definitely a versatile recipe.

The one thing I would change would be to reduce the temperature from 425°F to maybe 375°F or even 350°F. At 425°F, it was mostly done by 30 minutes and the top was starting to get quite brown. I covered it with foil to avoid burning the top. The quiche only needed another 15 minutes of cooking time.

I really like this tomato quiche recipe—it's pretty easy and tastes great! I cut 3 tomatoes into 14 slices, but I think I could've used more tomatoes in the filling. I used herbes de Provence instead of dried basil and oregano because that's what I had on hand. I used grated feta cheese instead of provolone (also what I had on hand), and it worked fine. The tomatoes took around 15 minutes to roast. My tart took 65 minutes to cook through. I served it lukewarm, and it had deflated a lot by the time I served it. Tasted great, though.