My grandmother, Vovó Costa, used to serve this Portuguese sausage frittata (tortilha in Portuguese or tortilla in Spanish) to my cousins Barry and Wayne and me straight from her big cast-iron skillet for lunch or, if we were lucky and allowed to stay up and watch The Ed Sullivan Show, for a late supper on Sunday evenings. It’s terrific served warm as a main course, at room temperature as a starter, or chilled and sliced into thin wedges as an hors d’oeuvre.–David Leite 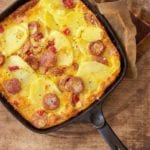 While I didn’t have any Portuguese chorico, it was suggested I try an Andouille-style sausage. Because this recipe is a Portuguese family recipe, I wanted to honor that tradition so I subbed some Portuguese linguica.