☞ READ THE ARTICLE: THE GARDEN THAT ALMOST ATE ROXBURY

WHAT CAN I SUBSTITUTE FOR CHERRY TOMATOES?

If you’re growing your own cherry tomatoes, you might find the idea of not having enough of them laughable. But, it happens. You can go up a size and use grape tomatoes. They’re the closest thing and it won’t make that much of a difference. Beyond that, everything else will either be too large or too watery for a tart like this. 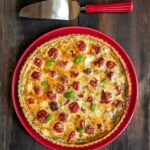 For the tart crust

For the roasted cherry tomatoes

For the cherry tomato tart filling

Make the filling and assemble the cherry tomato tart

This cherry tomato tart is beautiful, flavorful, and delicious. The crust has a wonderful flavor from the fresh herbs and complements the creamy filling well. I liked the idea of roasting the tomatoes first, and they were literally bursting with flavor in the finished tart. The first time I made this cherry tomato tart I had larger tomatoes and left them in for the full 20 minutes, but my tomatoes were smaller the second time around, so they were ready in 10 minutes. (I had to sneak a few off the baking sheet, and they were delicious!) 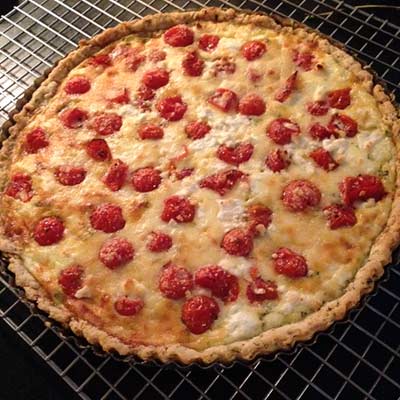 The crust came together easily and was perfect. It was a bit sticky during rolling, so I ended up moving it to a floured piece of parchment paper and chilling it for about 10 minutes before baking because it seemed to have gotten a little too warm during the rolling out. It baked up perfectly in 25 minutes and looked beautiful out of the oven. The assembled tart also baked for 25 minutes and was nicely browned on top.

It was easy to slice and serve. It was a thin tart, not at all like a thick quiche, but it had great flavor. What a lovely way to use all those cherry tomatoes that come flooding in at the end of summer. A delicious first course, or when combined with a salad, a light lunch or dinner.

This recipe makes a perfect cherry tomato tart. Placing fresh herbs in the crust, in the filling, and on top gives it bursts of flavor even when you're not expecting them. My tart looked exactly like the photo.

The baking times are correct as stated in the recipe. Blind baking the crust was essential because the filling is pretty much all liquid. As a result of the blind baking, the crust was well-cooked and not at all soggy. The tart had great flavor, and the filling was very creamy. The tart will be completely done when the top is lightly browned, about 25 minutes.

It lasted a couple of days for us in the refrigerator and was easily reheated by placing it in the toaster oven on “warm--300°F” for 10 minutes. You get 6 nice slices, and they make a great lunch accompanied by a small side salad with a simple vinaigrette dressing.