This braised red cabbage recipe is red cabbage as you’ve never, ever experienced it. It’s almost as if it was meant to be for the holiday table. Actually, it was meant to be an accompaniment to duck and venison and other game, though we like it just fine with our turkey, too, owing to its richly spiced taste that’s sorta reminiscent of mulled wine. 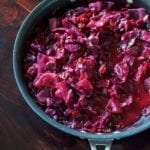 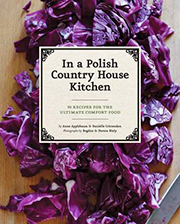 This braised red cabbage recipe produces a beautiful side dish, splendid in all of its redness. The cooking liquid mellows and enhances the flavor of the cabbage, and the cloves add a spark of spiciness and warmth. It was good served alongside chicken and potatoes but could stand up to heavier meat or game as well. I would use more cranberries when making this again—I used a heaping 1/4 cup, and they seemed lost in the final product.

The flavor and color of the braised red cabbage were wonderful, and the hint of cloves mixed well with the red wine and the tart bite of the cranberries. The flavors were still excellent the next day.

This braised red cabbage recipe is very similar to the cabbage my husband had growing up in Germany. My head of cabbage was very large. When I was done chopping it up, I had just over 16 cups of chopped cabbage. It filled my largest cooking pot. I had to add a second tablespoon of butter when doing the initial sautéing, as 1 tablespoon was too little for the amount of cabbage I had. I really liked the cranberries as they added an unexpected sweetness to the dish. When I make this again I think I’d like to increase the amount of cloves added to a full teaspoon, as they were almost unnoticeable in the end.

While I was hoping that this would be the braised red cabbage recipe I have been seeking for more than 5 or so years, it is not. It is, however, an easy recipe, and the results are delicious. The ground cloves added a bit more of a bitter taste to the recipe than I was seeking, so I will try it again without cloves.

The flavors of this braised red cabbage recipe all worked well, and the different textures did, too. Great on sandwiches.