These stuffed broiled mussels are a simple and easy appetizer made with steamed mussels in white wine topped with bread crumbs, parsley, garlic, and olive oil and then broiled until golden.

The first time I made this dish was on a hot plate and in a toaster oven. My sister and I threw a party when we lived in a raw TriBeCa loft that didn’t have a proper kitchen. We made hundreds of these stuffed mussels that we bought in Chinatown for $.99 a pound. You can stuff clams and oysters the same way. After boiling the mussels, strain the broth and save it.–Eugenia Bone 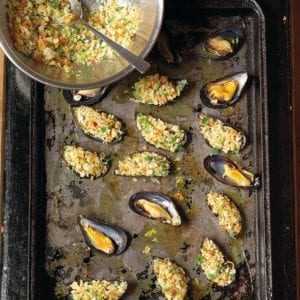 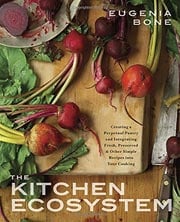 You can easily substitute clams or oysters for the mussels.

My tasters loved these mussels. They absorb a tremendous amount of flavor from the court bouillon. I originally thought that 4 pounds of mussels for 4 people as an appetizer was a bit much, but I can assure you that my six tasters (which included a seven-year-old and a 91-year-old) would have gladly eaten more had there been more. Each mussel is a small, highly flavorful bite, so eating 15 or more mussels is no problem.

The amount of stuffing should be just enough to barely cover the mussel. If you use any more stuffing, you’ll run out and, more importantly, the beauty of the mussels will be overshadowed. (Be sure to strain the broth through a piece of cheesecloth and save it, either in the refrigerator for a day or two or in the freezer for longer. Fortunately, we were making cioppino for our main course and were able to use some of the mussel cooking broth instead of water for it.)

If you’re a fan of stuffed clams, then you’ll love these stuffed broiled mussels. The garlicky bread stuffing definitely complements the briny meat of the mussel. They (almost) fed 4 hungry adults as an appetizer!

I’ve had stuffed mussels in other parts of the world and the top shell is usually left on, you break it off and it is used as a scoop to eat the mussel along with its stuffing. I served mine with tiny forks. We served them with a cold sauvignon blanc.

This is a simple and tasty way to prepare mussels. I love weekday suppers you can prepare mostly ahead and finish quickly. This is one of those.

We had the mussels as a main course with orzo and steamed asparagus.

Since there were only 2 of us, I used 2 pounds mussels and 1 cup each water and wine. Everything else stayed the same. But having said that, the given amount of stuffing was perfect for the 2 dozen mussels—I will double it for the full 4 pounds of mussels.

These were good but I think if the crumbs were bound together it would be more juicier and flavorful. To achieve this I would reduce the cooking liquid to 1/4 cup and then add 1 tablespoon heavy cream to the liquid. Next time I’ll use 1 cup Ritz cracker crumbs combined with the other ingredients and the liquid and drizzle the broiled mussels with lemon juice and serve.