Homemade Greek-style yogurt is easy to make and so much more satisfying than store-bought. All you need is milk and yogurt or yogurt culture for the plain—yet perfect—version. Here’s how to make it.

Rich, creamy, uber satisfying Greek yogurt is soooo much easier to make at home than you could imagine. That’s what we’re hearing from everyone who’s tried their hand at this simple recipe for plain yogurt that lets time—not you—do most of the work.–Renee Schettler Rossi

What’s the Difference Between Regular Yogurt and Greek Yogurt

Greek yogurt is strained for a longer amount of time than regular yogurt. That translates to less liquid in the final product and, as such, a thicker, richer, more velvety consistency than the regular yogurt you’re accustomed to finding in stores. 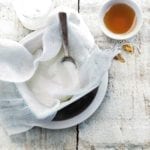 Homemade Greek-style yogurt is easy to make and so much more satisfying than store-bought. All you need is milk and yogurt or yogurt culture for the plain—yet perfect—version. Here’s how to make it.
Prep 15 mins
Cook 11 hrs 45 mins
Total 12 hrs
Breakfast
American
8 servings
72 kcal
5 / 2 votes
Print Recipe 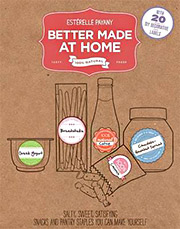 How to make homemade Greek yogurt in the oven

How to make homemade Greek yogurt in the pressure cooker

This is a great and easy recipe to make your own Greek yogurt. It’s a bit time-consuming but absolutely worth it. And it’s not much hands on time, anyways.

I used goat’s milk yogurt, which is readily available in my area. I heated the milk, using a digital thermometer, to 110°F and than whisked in the yogurt. Poured the mixture into 200-ml twist-on glasses (these glasses are actually from my yogurt maker) and baked them in the oven for exactly 3 hours. My oven runs a bit higher than the mentioned 125°F, even on the lowest setting, so I switched it off and on every 30 minutes. Than I poured the yogurt, which was somewhat runny, in a sieve lined with paper towels and let it drain for 3 hours in the fridge. The yogurt turned out nice and thickened with a fresh, pleasant taste. Not goaty at all 🙂

Next batch I will make using my yogurt maker (takes longer, but is easier) and will drain it longer.

I very successfully made the very slow version of this homemade Greek yogurt, and, though it took a very long time, it resulted in some of the finest yogurt I have ever had, and I will eagerly try to replicate this in the future. It was super creamy as described. Not only was the texture superior, but the taste was excellent as well.

While the author of this recipe states the secret is in the draining, I believe the secret starts back with the ingredients. I selected a goat milk for my milk and a sheep milk yogurt for the yogurt. I did this because the goat milk yogurt I was able to locate all had stabilizing and/or thickening agents such as tapioca and/or pectin and I not only did not know how these would work as inoculators but I also did not want those additional ingredients in my yogurt. The sheep milk yogurt contained none of those unnecessary ingredients.

I used a thermometer as directed, though I feel this can successfully be done without taking the temperature every step along the way and also without precise measurements. Note that the author translates the milk measurement of 1 quart into metric as 1 liter and while such an imprecise translation would not generally work in baking, it is absolutely fine here.

I heated the milk to 110°F, though I have previously heated to a higher temperature in this step of making yogurt. I added the goat’s milk yogurt and stirred well. I poured into the large, ovensafe glass container as directed and placed into the pre-warmed oven. Because my oven did not set to as low as 125°F, I initially went with the method of briefly turning the oven on periodically to keep it warm inside. I also wrapped my glass container in a big blanket to help keep it warm. At 3 hours, the changes were imperceptible. Ultimately, I kept this process going for just over three DAYS (yes, for nearly 77 HOURS), at which time I was satisfied with the thickness of my yogurt. It may seem scary to folks who feel a need to keep everything under refrigeration, but remember, these are live cultures!

Then it was on to straining. It is my preference to use a T-shirt but I did not have this available. Remember, my yogurt was not very thick or solid at this point. I used an entire package of cheesecloth (9 square feet) folded over and over and then set into a very fine mesh strainer, allowing the yogurt to drain, but being carefully to set it up so I did not drain away too much of my valued product! I refrigerated for 3 hours and checked it, but it was still very loose, as it was also at 4 hours. At 24 hours, I had moderately thick yogurt.

What happened as I began to unwrap it was magical—I opened the cheesecloth to find the creamiest most lovely yogurt ever, almost a custard! Glisteningly beautiful. Melt-in-your-mouth deliciousness. Rich. Creamy. A little goat-y underneath the richness.

I have made yogurt using a variety of methods and none have yielded the quality yogurt that I achieved with this batch. This is the best yogurt I have ever had in the United States.