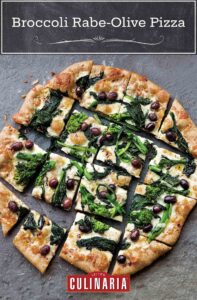 We’re not saying broccoli rabe pizza is going to replace sausage pizza in your heart and appetite. But the hearty and healthy vegetarian option is drawing raves from everyone we know, especially when made with a whole-wheat crust.

We know what you’re thinking. And no, we’re not saying broccoli rabe pizza is going to replace sausage pizza in your heart or your cravings. We’re merely suggesting it may, under certain circumstances, be a completely viable alternative. Consider it.–David Leite

Do I need to cook the broccoli rabe first?

Our recipe instructs you to dip the broccoli rabe in boiling water but only for a couple minutes. Blanching the broccoli rabe like this ensures it’s tender by the end of the pizza’s short baking time and also tones down the bitterness of the Italian vegetable so everything—vegetable, olives, cheese, chile flakes, crust—are perfectly in balance with on one ingredient screaming louder than the rest. 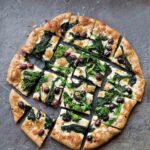 We’re not saying broccoli rabe pizza is going to replace sausage pizza in your heart and appetite. But the hearty and healthy vegetarian option is drawing raves from everyone we know, especially when made with a whole-wheat crust.
Prep 15 mins
Cook 15 mins
Total 1 hr 10 mins
Mains
Italian
2 to 3 servings
716 kcal
5 from 1 vote
Print Recipe 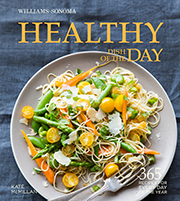 This broccoli rabe pizza was one of the easiest and most satisfying dinners I’ve had in quite a while. The flavors, textures, and looks of this pizza are phenomenal. And, on top of that, the recipe worked perfectly as written. Absolutely a keeper.

I used Trader Joe’s whole-wheat pizza dough ($1.19), which worked wonderfully. I think this pizza needs the somewhat more rustic flavor and feel of whole-wheat dough, so I probably won’t try it with a plain white-flour dough. My bunch of broccoli rabe weighed in at 600 grams, so I didn’t use the whole bunch but rather 3/4 pound, and it was the perfect amount. And 8 ounces cheese seemed too much for me, so I used only 6 ounces, which was absolutely enough. I boiled the broccoli rabe for exactly 3 minutes, and it was nice and tender. Baking time at 525°F was exactly 8 minutes.

Seldom have I had a recipe work so perfectly. I’m a fan!

Boy, was this a super tasty pizza and a gorgeous one at that! It was picture-perfect coming out of the hot oven—the crust was lightly browned around the edges, crisp yet tender in the middle, and the melted mozzarella cheese, garlic oil, tender broccoli rabe, and briny olives were a wonderful flavor combination. We adored this pizza and, frankly, couldn’t eat it fast enough. It fed 3 (hungry) people.

I used our favorite white-flour pizza dough from our local market, and the weight of the head of broccoli rabe was right at 1 pound. I liked the idea of making a garlic-chile oil and drizzling it over the pizza—it added a nice spice and flavor to the pizza’s base. I am a huge garlic fan, so I could even see adding more than 1 clove to the pizza next time I make it. Yes, the broccoli rabe only took about 2 minutes to become tender; it’s important to watch it because you don’t want it too soggy coming out of the hot water.

At 550°F, the pizza was perfectly cooked at right about 10 minutes. I didn’t use a baking stone, just a cornmeal-sprinkled, parchment-covered large baking sheet.

We adored this pizza and could hardly wait for it to cool before slicing into it. Great recipe!

This is a perfect pizza and absolutely doable in a home oven. The recipe is surprisingly simple—just a few ingredients and, with a little planning ahead, you can have homemade pizza dough by spending 5 minutes the night before. The only hard part about this recipe was convincing my spouse to try a bitter green that he normally avoids, but even he declared this pizza perfect.

I used the European Peasant Bread dough recipe from Jeff Hertzberg’s & Zoë François’s The New Artisan Bread in Five Minutes a Day, substituting spelt for the rye. This dough has been my go-to recipe for nearly 2 years. I also gave my oven a full hour with the pizza stone in place at 550℉ with convection to get the highest temperature and the most effective heat transfer.

Since I had a good-size bunch of broccoli rabe, I made sure to remove not only the thick trunks of stem, but some of the larger diameter stems from the larger leaves. The quick parboil (I watched it turn bright green and tender and removed it promptly at 2 minutes) and immediate cold rinse was something I could do after all my other prep was done and before rolling the dough. I gave the cooled broccoli rabe several strong squeezes to extract as much water as possible before chopping. This pizza was perfectly crisp and brown around the edges at 8 minutes—it probably would take a little longer without convection although ovens vary. The pizza sat for a minute or two and then I ran a pizza cutter across it, making 8 pieces, and we decided we would resist the urge to eat it all that night, saving half for breakfast the next day. It took a lot of post-holiday willpower to do that. There was just the right amount of garlicky flavor without being overpowering, and I love this variation on a white pizza that’s actually sauceless. The only thing I might suggest is warming the oil with the garlic and pepper flakes for 30 seconds in the microwave to release more flavor (I do this for the oil for my croutons for Caesar salads). If someone really, really won’t dare to try broccoli rabe, I’m sure broccolini would be okay, but the pizza wouldn’t have the same contrast of flavors, so maybe peppery arugula (not pre-cooked) would be a better fit.

You could make this for just 2 people by using 1/2 pound dough and half the rest of the ingredients or just promise you won’t eat it all at once. It reheats brilliantly. I use parchment squares when working with bread dough and pizza, as they let me work with a bit less extra flour and I can easily transfer them to the baking stone. Because you are working with a pretty high temperature, it’s a good idea to remove the paper from the pizza after the first 3 to 4 minutes baking, using your peel to lift the already firm crust up. The paper slides out easily, and now your crust is directly on the stone to finish the bake. You do this partly to make sure the crust gets a nice firmness and browning, and also because you are well above 451℉ and your parchment is probably not rated for higher temps (you don’t want it to char or burn in your oven). This really helps for those of us who are not brilliant using a peel and cornmeal, especially if you make a thinner crust.

We really liked this pizza. The broccoli rabe and olives gave it a briny, bitter taste that was mellowed out by the mozzarella cheese. It’s also good for you with the broccoli rabe—a good source of vitamins A, C, and K as well as potassium.

A half bunch of broccoli rabe is plenty for 1 pizza. I had a store-bought pizza dough in my freezer, which worked great. The pizza took 8 minutes to bake. It served 2 of us for dinner with a few pieces left over for lunch.

Be sure to use a pizza stone and get your oven good and hot. It really makes a difference.