This recipe makes a damn fine black bean burger—and one of the best homemade veggie burgers we’ve ever had. It’s an inspired collision of ingredients that’s easy, healthy, spicy, vegan, contains no crazy multisyllabic fillers, and is satiating as heck. Be warned, there’s no “quick and easy” version of this recipe, as the authors concede. But as they say, it’s definitely worth the trouble. The recipe makes ample to package individual patties and stash in the fridge or freezer for another day—or maybe later in the same day given how surprisingly compelling the taste and texture.–Renee Schettler Rossi 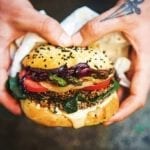 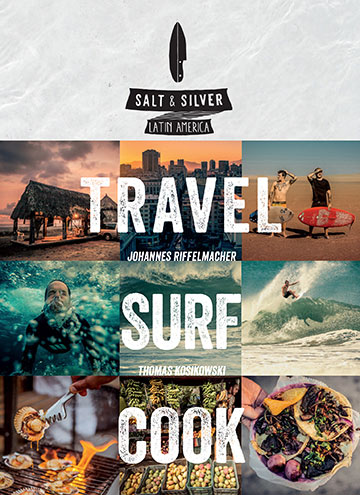 For the chile mayo

For the black bean burgers

*How To Pop Amaranth

First you need to purchase some amaranth, which you can find packaged or in the bulk bins section of your local health-minded store. Heat a wide, high-sided pot over medium-high heat. (Don’t use a short-sided pot or the amaranth will fly everywhere as it pops!) Add just a single layer of amaranth—don’t put too much in the pot or it will burn before it pops. And then wait. It’ll pop in seconds. Transfer the popped grain to a bowl and add another thin layer to the pot and repeat.

These black bean burgers are awesome! They really taste like hamburgers! The texture with the onion, zucchini, carrot, oats, and popped amaranth made for a “meaty” burger. And the spices, including cumin, cilantro, oregano, and chili powder, gave the burger that smoked umami flavor. Everyone who tried this burger loved it!

I used chipotle Tabasco sauce in the chile lime mayo. The recipe calls for 1 heaping teaspoon cayenne, but be careful if you don’t like it too spicy. It all depends on how fresh your cayenne pepper is and how you like it. The amount worked great for me but not so much for one of my guests. The lime juice and mayonnaise tame it a bit. Taste as you add until you’re happy with the heat level.

The combination of asparagus, onion, and cider cabbage is so beautiful and delicious. This truly is an award-winning veggie burger—the best I’ve ever eaten. Definitely double the recipe and freeze. They’d make fabulous sliders for a party, so try quadrupling the recipe. I’m still savoring the flavor, and so will you and your friends. I’m going to try grilling the burgers over hickory next time. I think that would send the flavor to even greater heights.

This black bean burger is a perfect substitute for a meat burger—satisfying without being stodgy, so full of flavor, and with a perfect consistency! The popped amaranth is a plus, giving the burgers a crunchy texture. The vegetables gave the burgers extra flavor, and the chipotle mayo was a great final touch!

I used canned beans and drained them, as the liquid would make it difficult to shape the patties, but I didn’t rinse the beans to avoid losing any flavor. The addition of oats and bread crumbs helped the burgers keep their shape.

Although these aren’t quick, they’re worth the time you spend making them! You can easily eat a couple of them in a single sitting.

These are a great answer to commercial vegetarian burgers. They’re made with ingredients you’re already friends with and give you total control over spicing or saltiness, which are my usual complaints with veggie burgers. If you can do a couple of things ahead of time, the burgers cook up in a flash. The prep is definitely more time-consuming than forming a meat patty or grabbing a frozen pre-made burger, but I think in the end this was definitely worth it, and the yield was generous enough to put some aside in the fridge and freezer.

First, I made the lime mayo and put it aside in the refrigerator. This is an easy do-ahead step that only takes 5 minutes. The only thing I felt could be improved there was to use some ground chipotle rather than cayenne. I tried that for my second batch and got a nice smoky flavor and color. I think an ideal version of the mayo would include a combination of cayenne and chipotle for a more complex heat.

Next, I tackled the scariest new thing about this recipe—popping the amaranth seeds since I was unable to locate popped amaranth. Working in very small batches (no more than 2 to 3 tablespoons at a time), you toast them in a large, deep pot for just a few seconds. Think of it as popping tiny corn, and be aware that they will want to jump out of the pan. Over medium heat or lower in a large wok, I stirred constantly, and the amaranth started popping in 5 to 10 seconds. A moment too long, and they’ll burn, so you have to stay right there. Also, if you end up overheating them, they won’t pop. I used a coarse sieve to sift those away from the light popped ones. The amaranth will resemble tiny styrofoam beads when you’re done. The rest of the prep is just a matter of chopping, measuring, etc. I’d suggest using a small food-processor bowl or immersion blender for the cilantro and jalapeño paste. My old-style Oster blender didn’t cope very well with the small amount of ingredients and liquid, and I frequently had to stop and rearrange the ingredients. As a result, my paste was a little more coarse than creamy, but it didn’t affect the dish.

I cooked my beans from scratch, so I had complete control over the salt level. I used a pair of gloves to thoroughly mix the mashed beans with the spicy cilantro-jalapeño paste and the cooked zucchini and onion. I formed the mixture into 20 golf-ball size balls and flattened them to about 1/2- to 3/4-inch-thick patties, pressing them into the popped amaranth and setting aside the batch to cook immediately. I separated the other patties using parchment paper and popped them in the fridge/freezer. I set up 2 hot pans, one for the veggies (onions, asparagus, etc.) and a 10-inch cast-iron pan that could fit 6 patties (they ended up about 3 to 3 3/4 inches in diameter). I poured in about 1/4 inch avocado oil and felt that was too much. I later found that just coating the bottom of the pan with a drizzle of oil was plenty. The burgers being cooked immediately seemed a little more fragile than the ones I cooked the second day, so that’s another reason to mix the burgers ahead of time and let the formed patties chill. None fell apart, and they were very pleasant in appearance as well as taste. I did receive feedback that more texture might be nice, which I think could be achieved with some crumbled firm tofu. The punch of flavor really comes from the spicy chile lime mayo, so for the sensitive dinner guest, I’d also serve something milder to dilute it, such as yogurt.

I swapped out the cabbage for Brussels sprouts, slicing and cooking it he same way. I also skipped the tomatoes and just used a little extra avocado. I plated the burgers over and under the veggies and without buns for those who were carbohydrate-conscious.

Day 2: The cold refrigerated patties fried up very nicely in minimal oil in a well-seasoned cast-iron pan. I also tried cooking 1 patty straight from the freezer and it only took a few minutes more. It was actually the firmest, most burger-like version.

Most of the ingredients for this recipe are easy to have on hand, so we will be making this again and again. The new ingredient was the amaranth, which was a winner. I’ll be sure to try using it crust other items. You could definitely try different seasonal vegetables as garnishes or play with what goes in the burger mix now that you have this method and the right proportions. Most importantly, you have a new vegetarian-friendly entrée you can serve to your favorite carnivores with a smile. These burgers definitely good enough for company or weekend brunch with an egg on top!