These potato latkes are, per tradition, blissfully crisp outside, tender inside. And the wonderfulness doesn’t stop there. A dollop of sweet apple-date chutney takes the place of the usual applesauce and the requisite plain sour cream takes on a holiday lilt thanks to a pinch of ground cinnamon.

These potato latkes with apple date chutney and cinnamon sour cream are all fancied up for the holidays. As is tradition, the potato pancakes boast all the perfectly-crisp-on-the-outside-tender-on-the-inside goodness of usual latkes. But we’ve swapped a sweet apple date chutney for the usual applesauce and and slyly stirred some cinnamon into the requisite sour cream. So impressive they may just come to earn a special place on your table year round.–Angie Zoobkoff 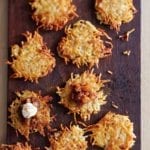 These potato latkes are, per tradition, blissfully crisp outside, tender inside. And the wonderfulness doesn’t stop there. A dollop of sweet apple-date chutney takes the place of the usual applesauce and the requisite plain sour cream takes on a holiday lilt thanks to a pinch of ground cinnamon.
Leah Koenig
Prep 1 hr 30 mins
Total 1 hr 30 mins
Sides
Jewish
15 latkes
151 kcal
5 from 1 vote
Print Recipe 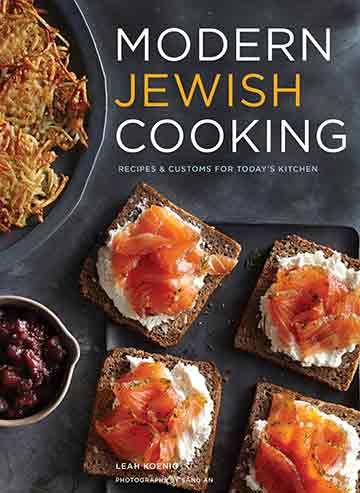 For the apple date chutney

For the cinnamon sour cream

For the potato latkes

This recipe reinvents your traditional latkes. As the author says, he stays true to the traditional latke itself, which is still amazing, and adds a nice upgrade on the toppings. The clove and cinnamon give the dish that holiday essence and the apple date chutney gives the latkes a depth and complexity that aren’t expected with this traditional food. I made the condiments in advance which helped the process not seem as long. I used 2 Granny Smith apples. After 30 minutes they were nice and soft while still holding their shape and not breaking down. It only took 4 minutes for me to be able to reduce the chutney to a thick consistency. At the point the liquid that was left over was about as thick as real maple syrup. I could also tell it was done because the liquid was starting to make the bigger “sugar bubbles” that don’t quite pop but get bigger and smaller (if that makes sense!). I reheated the leftover latkes in the oven and, to my surprise, they crisped up nicely. When I took them out of the skillet, I could see some oil on them so I patted them with a paper towel to remove a little more of the grease. I can’t wait to use this chutney on some other things! Pancakes anyone?

This is actually a 3-part recipe. The apple-date chutney is a bit of work with all the chopping but is fantastic. I used Granny Smith apples and it is completely worth the effort. The potato latkes are fantastic. They were very crisp on the outside and soft on the inside. The flavor is good. I would definitely make this recipe again. The cinnamon sour cream is good but could be skipped—or you could just use plain sour cream. I think this could serve up to 6 people, depending on what else is being served. There was a lot of leftover chutney and this is a good thing because you could use the leftover chutney on chicken or in other dishes. The recipe took about an hour, start to finish. While the chutney cooked, I put together the sour cream and cooked the latkes. We ate these right after they were done. They were great.