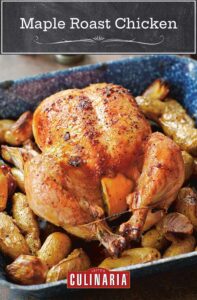 We all know that maple syrup and chicken are a match made in heaven. The rustic sweetness makes its way into the gravy as well as the crisp, crackly skin. We only have one thing to say about the origin of this recipe—they call him Sweet Paul for a reason.

This maple roast chicken recipe is my ultimate go-to dish, and it just about makes itself, all in one pan. The drippings are used to make the best gravy ever. It’s so good that I could open up Sweet Paul’s Gravy Joint. You’re going to want to eat it by the spoonful. I always try to use organic chicken: You can taste the difference.–Paul Lowe

Pancakes are swell, but breakfast doesn’t have an exclusive on maple syrup—especially not when this maple roast chicken is in the house. And don’t you dare even think of letting a single drop of the maple-y gravy go to waste because if we had our druthers, we would perpetually be in maple season. We’ve been daydreaming about what else we’d do with this gravy, and thus far we’re having a difficult time imagining anything besides mopping it up with buttermilk biscuits. But we know there are more options than that, so if you care to share what tickles your fancy, let us know in a comment below. 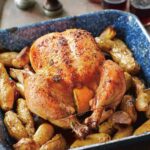 Maple syrup makes this roast chicken shine. It's a simple meal that will impress your family and friends. I love Grade B (Grade A–Dark Color and Robust Flavor) maple syrup, I think the flavor is a little deeper and more complex than Grade A. Give it a try!
Paul Lowe
Prep 25 mins
Cook 1 hr 15 mins
Total 1 hr 40 mins
Mains
American
4 to 8 servings
1895 kcal
5 from 1 vote
Print Recipe 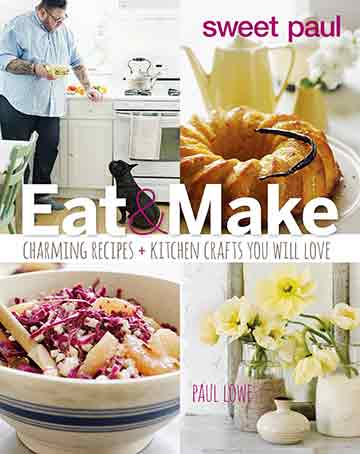 For the maple roast chicken

For the maple gravy

*What is Grade B maple syrup?

Sweet Paul himself recommends using Grade B maple syrup in this recipe. But hang on a minute–Grade B doesn’t exist anymore, since 2014. What you’re looking for now is Grade A: Dark Color and Robust Flavor. It’s still the same thing, it’s just a change in government naming regulations in the US.  This category is darker and richer, with a more brown sugar-like flavor. It’s harvested later in the season and has a lingering maple flavor. Some of our testers used the lightest (Grade A) version of maple syrup and found that the maple flavor was barely discernible, so take that as you will–it all depends on how much you love that sweet, sweet syrup.

The One and I were looking for a wintry Sunday supper—something comforting and marvelously tasty. And it had to be easy, as it was The One's turn to cook. Having had the pleasure of meeting Sweet Paul for lunch one afternoon, we decided to jump on this maple roast chicken recipe. It didn't disappoint. The chicken took no time at all and, I'm embarrassed to say, we ate the whole thing. And when I say "we ate the whole thing," I mean the two of us ate the entire bird in one sitting. It was that good. And by now you know I'm a potato freak, so that part was a no-brainer. One last thing: Do not, I repeat do not, skip the maple gravy. It's the king of the dish.

This maple roast chicken recipe will be taking the place of our old standby favorite for roast chicken. That means a lot around here because when it comes to roast chicken, usually a savory flavor ranks higher with us than a sweet one. Not this time. Oh no! This chicken knocks it out of the ballpark—and then some. Now down to the business of the recipe itself. It was just perfect. Perfect? Yes. It had crisp skin on the outside and was juicy and flavorful inside. Yes, the time was just about right.

I used fingerling potatoes, and they were done perfectly and looked quite cute hanging out with the shallots. I used Grade A dark amber maple syrup, and it was just right. The trick: do you mix the syrup and olive oil or do them separately? I did them separately—olive oil first because it was listed first. I thought I had made a critical error because after dousing said chicken with the olive oil, the syrup slithered down the chicken into the pan. I was sure the poor bird was doomed. Not so. It was perfect—the maple flavor came shining through anyways.

I took the chicken from the oven and placed it on a platter with the potatoes and shallots. I then poured the liquid from the roasting pan into a container. I had more than 1/2 cup drippings. I didn’t use the cornstarch for the gravy. This recipe creates a rock star of a dish! The gravy is so good, it might even work on ice cream. It’s not so sweet that it overpowers the chicken, and the shallot is just the right counterpoint to the maple sweetness. I would also use this gravy on that famous combination of fried chicken and waffles!

This maple roast chicken recipe will definitely find its way into my roasting rotation for the fall and winter. The chicken came out golden and crisp. The maple syrup and lemon flavors were actually pretty subtle, but the meat was moist and tender. The veggies—I added about a pound of small yellow potatoes and a couple of kohlrabi from my CSA bucket—were perfectly caramelized, and I was left wishing I had thrown more into the pan.

But what made this dish was the gravy. OMG. Rich, maple goodness. We doused each bite of meat and potatoes with the gravy and made no apologies for it. I used Grade A dark amber maple syrup and mixed it with the olive oil before pouring it over the chicken. It seemed to just roll off the crisped skin more than getting absorbed. I’m wondering if brushing the syrup and oil on the chicken separately would have been a better method than pouring. I had 1/3 cup drippings, so not quite the 1/2 cup called for in the recipe.

I started the gravy in the roasting pan so I could scrape the gooey bits off the bottom. I then transferred everything to a saucepan to add the cream and allow the gravy to thicken. My sauce did eventually thicken after 25 minutes, but if you’re short on time, I think you could get away with adding the cornstarch mixture after 10 to 15 minutes and allowing it to boil. This recipe is definitely a keeper!

This maple roast chicken recipe was a delightfully different recipe for chicken. While it did take time to prepare, the flavor was spot-on, and everyone loved it. There’s a nice bit of sweetness without the overpowering flavor of maple. I used fingerling potatoes because they’re a favorite of ours, and I always have them on hand. The potatoes had a slight sweetness from the syrup but not too much. The shallots were wonderful.

The gravy was easy to put together but it does take time to thicken, and I needed the cornstarch mixture to thicken to the right consistency. This is one recipe I will be making more often. I served this with steamed green beans and a salad. Make sure you have some rolls or bread to sop up all that yummy gravy. For me, the cooking times stated in the recipe were spot-on.

I covered my pan in foil to keep the chicken warm while I made my gravy, and the chicken was still hot when I served it. I used a different pan to make my gravy because my roasting pan will not work on my induction stove. The only problem I see in using the same pan is you would have to transfer your chicken and vegetables to a different container. It would cool much quicker that way. There were more than enough drippings to get 1/2 cup.

This maple roast chicken recipe is absolutely delicious. It takes some time to cook, but the prep is easy—after 5 minutes it was ready for the oven. I just rinsed the chicken, patted it dry, rubbed it with a little olive oil, sprinkled it with salt and pepper, tossed in the lemon, and into the oven it went with small red and Yukon Gold potatoes. I placed it breast-side down for the first 30 minutes, which allowed all the juicy goodness to flow into the breast meat. Then I flipped it over and decreased the heat, adding the maple syrup and olive oil.

I mixed the 2 ingredients together before I poured them over the chicken. Maybe it was because the maple syrup was cold, but I ended up with a thick, almost gelatinous syrup which actually helped it run smoothly over the chicken. I used Grade A dark amber syrup. I ended up cooking my chicken for almost 15 extra minutes to get the thigh meat to 165°F. The skin never did take on that nice, roasted, caramelized coloring, but the taste was unbelievable.

I used my roasting pan to make the gravy while the chicken rested. I drained the juices, separated the fat, and added the rest of the gravy ingredients to the pan, incorporating all the browned bits to add great flavor to the finished product. I did have to use just a little bit of corn starch slurry to thicken the gravy, but other than that, it was amazing. I’ll definitely make this again. The maple flavor isn’t as prominent as you may think, just subtle and delicious.