The secret to these light and fluffy pancakes from Clinton Street Bakery are whipped egg whites–plus plenty of melted butter–folded into the batter. These pancakes, along with our homemade maple-espresso bacon, are your breakfast dream team.

We swoon to these ethereally light, slightly sweet, burnished brown hotcakes for many reasons. Among the aforementioned adjectives that make this recipe quite memorable, if you, like us, tend toward a little a.m. laziness, there’s another reason you’re going to want to keep this recipe handy. And it has everything to do with buttermilk–or rather, the lack thereof, which means there’s no need to run to three stores to try to find it. Reserve your energy instead for sizzling up some bacon.–Renee Schettler Rossi 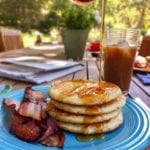 The secret to these light and fluffy pancakes from Clinton Street Bakery are whipped egg whites–plus plenty of melted butter–folded into the batter. These pancakes, along with our maple espresso bacon, are your breakfast dream team.
Prep 25 mins
Cook 10 mins
Total 35 mins
Breakfast
American
20 (3-inch) pancakes
229 kcal
5 / 6 votes
Print Recipe 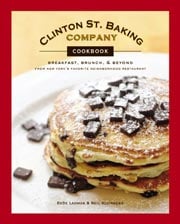 These fluffy pancakes have a very light texture—almost like a regular cake. They’re soft, slightly sweet, and seem to rise a bit more than the common pancake. I didn’t try either of the optional fillings, instead using maple syrup and fresh butter. It was still quite nice! I got closer to thirty 3-inch pancakes, instead of twenty. I’m not sure why only 2 teaspoons butter are called for in the cooking part of the process, as all of the butter disappeared after the first few pancakes. But my griddle itself was seasoned, so sticking wasn’t a problem.

I don’t know if it’s the 1 tablespoon baking powder or the whipped egg whites (or both), but these are the lightest and fluffiest pancakes I’ve had in a long time. They’re also full of flavor and have a good chew. This is more butter than I typically add to my pancake batter, but as a trade-off, I didn’t need to butter the finished pancakes. I made plain and banana-walnut pancakes, and both were great. I usually keep finished pancakes in the oven to keep them warm until we’re ready to eat, but these are best when eaten right off the griddle. If you can time them this way, I highly recommend it.

These pancakes were so light and fluffy, and they didn’t deflate upon hitting the plate. Whipping the whites and adding them to the batter made these pancakes so delicious and not at all heavy. All of the whipping and heating tips were descriptive and helpful. I did add more butter to my griddle, however, when cooking the pancakes—about 1 tablespoon for each batch. We served them with just warm butter and maple syrup. It was a delicious breakfast—a reason to get up in the morning!

These fluffy pancakes are sweet, flavorful, and as light as air. If you’re so inclined, you can eat them without syrup; just a dusting of sugar and fresh fruit. Yep, they’re that good! When cooking, I’d go with however you usually cook pancakes rather than following the instructions. Having no griddle, I tried 3 different skillets and got 3 different results. My smoke alarm went off during the first batch, as the butter immediately started smoking at that high temperature. I changed pans, lowered the heat, and made them the way I usually do, and they were perfect. I halved the recipe and, using a 1/4 cup scoop, I got 14 pancakes of perfect 4-inch diameter size.

Whoa! Where have these incredibly light and fluffy pancakes been all my life? I grew up on Bisquick pancakes that are a far cry from what I just made here. These have the most delicious texture—soft, dense, moist, crisp, and simply mouthwatering! My son will be growing up on these. I halved this recipe, and it worked perfectly. Also, I used a Circulon pan, so there was no need to butter the pan. I figured with all the butter in the recipe, it wouldn’t be missed, and it wasn’t.