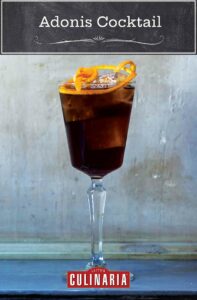 The Adonis cocktail brings together vermouth, a couple of styles of sherry, orange bitters, and a twist. A cocktail classic named for that uber-handsome Greek god and, more specifically, the Broadway show that came later.

The Adonis cocktail has its origins in the late 1800s and, as the story goes, was named after the popular Broadway musical about the Greek myth. It’s a sophisticated beverage featuring sweet and dry sherry mingled with sweet vermouth and orange bitters. It also happens to be a low-alcohol cocktail, so we strongly encourage indulging in seconds. We certainly did.–Angie Zoobkoff

WHAT’S THE DIFFERENCE BETWEEN SHERRIES?

In the most general terms, sherry is a wine made primarily from the Palomino grape, that’s then fortified with grape brandy. The Adonis takes 2 different types of sherry, one that’s dark and dry, and one that’s sweet. There are many types of sherry, so many that you might need a little hint before shopping for this recipe.

Authentic sherry is only made in the Jerez region of Spain and the bottle will be labeled as Jerez-Xérès-Sherry, so that’s the best place to start. Generally speaking, sherry is divided into fino (pale, light, dry, and delicate) and olorosa (deeply colored, fruity, full-bodied, and dry).

Those sherries then become another kind of sherry when sweetened. Pedro Ximénez, which is used here, is the sweetest of the sweet sherries, and it’s syrupy and raisiny. You can substitute a pale or cream sherry instead if you want something a little lighter. 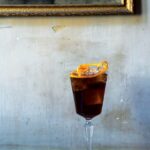 With just 4 straight-up ingredients and a twist, this wonderfully light and tasty Adonis cocktail is at the ready. This is definitely an easy-to-sip aperitif that’s perfect as a before-dinner drink, but I would also consider sipping it all night long. The amber color is lovely and makes me think that it would be delightful over the holidays.

The orange bitters add a bit of a spice-filled kick while the vermouth and sherries add a touch of bitterness along with a well-balanced, bittersweet richness. This cocktail is full of flavor and definitely a keeper! Note that it serves one. You might want to consider making a larger batch for all-night sipping. I used Dillon’s Small Batch Sweet Vermouth (Canadian) instead of Carpano Antica.

Even though the ingredients for this Adonis cocktail recipe were hard to find, once I mixed it up, I was in love with the subtle flavors of the vermouth and sherry mixed with orange. I can’t wait to make more of these flavorful low-alcohol cocktails.

I think the cocktail would taste better with a few more dashes of orange bitters and a twist of orange rather than lemon. I used Lustau Amontillado Los Arcos Jerez Xeres, Harvey’s Bristol Cream, and Dolin sweet vermouth.

I love having this new-to-me cocktail to add to my toolkit, especially because it’s actually a classic and can be an aperitif or the main event. It gave the Carpano Antica vermouth a starring role to show off the aromatic qualities that make it so interesting and, backed by the bitters, it paired beautifully with a combination of dry and sweet sherry to make a more-ish cocktail—as in, yes, please, I will take a second.

I used a dry sherry and a sweeter one. This is very subjective since I find Amontillado sweet, and fino almost dry enough, so in the absence of a proper dry Oloroso I used a fino for the dry side and a blend of Amontillado for the sweeter one. Someone with a sweeter preference might go with something even more oxidized, but I recommend that you try to pair the sherries as contrasting so that the overall sweetness (including the vermouth) doesn’t overwhelm. I used Meyer lemon twists. And to keep measurements simple, I encourage you to double this recipe and share. Cheers!