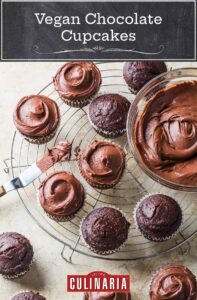 Tender vegan chocolate cupcakes are given lift and moisture from aquafaba and coconut oil. The lush chocolate frosting is more creamy and chocolatey than you can imagine.

They vegan chocolate cupcakes possess such an intensely dark chocolate smack that no one would even dream belongs to a cupcake that lacks customary cake ingredients like butter and eggs. And the secret to the airy texture is aquafaba, that trendy starchy liquid found in canned beans or chickpeas that’s been making appearances in vegan baked goods like crazy the last several years. It’s like a secret weapon for vegan baking. We know. It didn’t sound compelling to us, either. And then we tried it. Swear there’s not a trace of beaniness in these little lovelies. In fact, we can pretty much guarantee no one’s even going to know they’re vegan if you don’t tell them.–Angie Zoobkoff

Aquafaba is commonly made from chickpea water, although some people have used soy or neutral-tasting beans like cannellini as a base. Whipped into a stiff foam, it’s an excellent replacement for egg whites. The starchy liquid is a great binder directly from the can, but what really makes it magical is that it whips and creates a foam. Aquafaba is able to trap air, giving items structure at the same time it delivers a fluffy crumb and lift.

To measure the amount of aquafaba called for in a recipe, begin by vigorously shaking the unopened can of chickpeas. Next, drain the chickpeas through a fine-mesh strainer over a bowl, and reserve the beans for another use. Thoroughly stir the aquafaba and then measure. While it may not be visible to the naked eye, the starches in the chickpea liquid settle in the can—in order to take advantage of them, you’ll need to agitate them to ensure they’re evenly distributed throughout the liquid. 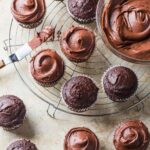 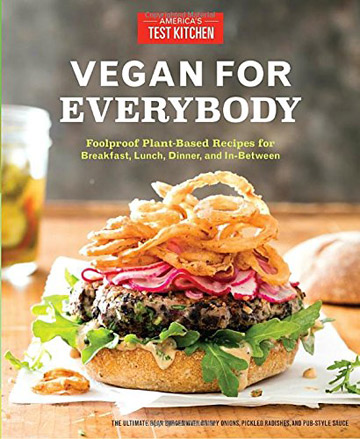 For the vegan chocolate frosting

For the vegan chocolate cupcakes

*Do not use natural cocoa powder in this recipe as it gives the cupcakes a rubbery, spongy texture. **Not all brands of semisweet and bittersweet chocolate are vegan so check the ingredient list carefully of whatever brand you intend to use.

There are no vegans in our household, but I love a cupcake, so I decided to try this recipe. These chocolate cupcakes are excellent. They’re moist, fluffy, and very soft, deep chocolate-y flavor that’s just sweet enough. I never knew you could get such a great cake texture without an egg in sight!

They rose beautifully and we’re perfectly baked at 20 mins. I used almond milk and included the optional espresso powder. I used store-bought frosting so can’t comment on that part of the recipe.

I’ve been hearing a lot about vegan baking with aquafaba, but I’ve been a bit dubious of using that creamy substance from a can of beans in my baked goods. However, after making this recipe, I’m a convert. I thought these chocolate cupcakes were moist and had a rich flavor.

The chocolate frosting made with coconut fat was also delicious! I think you could get creative with this recipe and add some dissolved espresso powder to the frosting to make a lovely mocha flavor. Also, I filled a few of my cupcakes with raspberry jam before adding the frosting and they were delicious.

Chickpea liquid as an egg replacement? I’ve seen a lot of vegan oddities, but I admit I’ve never even heard of this one. I was half expecting it to not even work or for the cupcakes to taste like hummus (kind of like those black bean brownies that everyone keeps telling themselves taste just like regular brownies). But I’ll be darned, the aquafaba and cream of tartar whipped up really quickly and looked just like whipped egg whites and folded right into the thick chocolate batter. They baked up just as instructed and had a lovely texture.

And the chocolate frosting…oh, this frosting. Holy moly. I love me some home made buttercream, but this is so rich, creamy, and simple that it’ll be tempting to make again for other baked goods. I cheated a little and used Trader Joe’s canned coconut cream so that I didn’t have to refrigerate coconut milk over night, and it worked perfectly–a can and a half was the perfect amount. You really can’t argue with something that’s just mix, nuke, mix…I had a ton left over since I made the whole recipe and I’m not ashamed to say that I ate some out of a bowl, all by itself, for dessert last night. Exquisite!

This recipe was not unlike a typical chocolate cupcake recipe in terms of its process, and I doubt anyone would even notice that they’re vegan. The cupcakes are moist but not too tender or crumbly. They hold up well to being frosted and stay together when being eaten, which means your guests can eat them one-handed over the carpet without leaving too much of a literal crumb trail.

If you’re concerned about the highly polarizing flavor of coconut taking over your frosting, fear not. It’s barely detectable next to mounds of dark chocolate.