Senate bean soup is a winter classic made with navy beans, a ham hock, and a handful of pantry ingredients that somehow meld together into a sum that’s far, far superlative to its parts.

Senate bean soup is named pretty literally. It’s a soup that’s been served to legislators at the U.S. Senate Restaurant in Washington, DC, since the early 1900s. It seems back then the elected officials in Washington, DC, were a little more concerned with eating modestly since they were on the taxpayers’ dime. Although make no mistake, this recipe may come together with pantry staples, but its flavor errs on the extravagant side. –David Leite

*What’s the difference between white beans?

When you see “white beans” in a recipe, it could mean Navy, baby Lima, Great Northern or cannellini beans. So how do you know what to pick? It turns out that, while they have their differences, the short answer is that they can be use interchangeably quite easily.

Navy beans (also called pea beans) are quick-cooking, mildly flavored and get soft when cooked. They’re perfect for pureeing or thickening a dish. Baby Lima (butterbeans) are soft, small, creamy, and starchy. Their rich, buttery texture makes them perfect for eating on their own or in casseroles or soup. Great Northern beans hold their shape well, take on the flavors of the foods they’re cooked with, and are commonly used in French cassoulets. Finally, cannellini beans are the largest of all, with a meaty texture that keep their shape well. 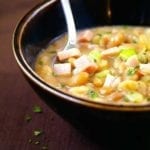 This Senate bean soup was really easy to make and had an excellent creamy consistency. The ham and parsley were nice. What a great dish on a snowy day to enjoy while watching football. Again, I can’t express how simple this was. Anyone can make this.

This is an excellent recipe for Senate bean soup that can remind people that making soup is easy and satisfying. The ham hock makes a beautiful stock. I think pork stock is sadly neglected in home kitchens and in this soup the stock enables the minimal ingredients to develop maximum flavor after a day of rest.

Also, the ideas and variations that come to mind from a recipe like this is another reason why I rank it highly.

In one word, comforting. This Senate bean soup is a deliciously simple soup that’s just perfect at this cold and snowy time of year. It’s also very simple and inexpensive to make, which is a great boon. I had everything on hand except the beans, parsley, and ham hock.